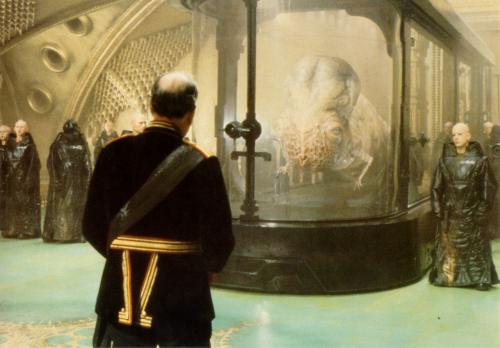 Realmcovet reviewed my book from last year's NaNoWriMo, Watchtower Gothic. She's got a canny eye for some details. I don't know what I'm going to do this November-- I have an inkling that I might continue the story of Gillick Bootblack, but I also came up with a competing idea for a "Watchtower Omphalos" book on the Shining Horde metaculture. We'll see, I'll keep thinking about it. I've been thinking about it in part because I watched the first part of David Lynch's Dune the other night. You know, that movie may be a disaster but there are some grandiose scenes lurking in it. The set design & costuming are great-- there is a strong blending of stone walls & computer screens, knive fights & force fields, high-, lo- & medium-tech. Bob Ringwood's stillsuits & the Harkonnen lamellar are lasting visual images. Bits are filled in-- the weird mentat motto, the heart-plugs in Giedi Prime's citizens, the fleshy grasshopper-like Guild Navigators-- that add to the mythos, rather than subtract. Still, so much mess. I just like the style of it; since the sequels to the book Dune ruined that book as a monolith, as a perfect mountain, I don't mind a little more blood in the water, if it brings the sharks. I wanted to post a clip of the Third Stage Guild Navigator sliding into the Padishah Emperor's throne room, because that is a really tight & amazing scene, but it turns out YouTube is scoured clean on behalf of the film company. Well, idiots, I am doing free advertising for your quarter century old movie. If you want to act like jerks about it, go ahead. Stupid.

Lately Jenny's hobby has been making cheese. Not Earl Grey cheese-- I was mistaken but maybe it is the sort of happy accident like spilling sulphur on rubber? Maybe I invented Earl Grey cheese, we'll find out. Part of making cheese is the by-product, whey. Well, we had this whey, & figured "if 'curds & whey' is a thing there must be something you can do with whey!" So I looked online & found out that it used to be served as a drink at inns! I scribbled that in my Oubliette notebook & took a swig-- it was pretty good! Jenny concurred! We're maybe going to cook with it though-- there was a bunch. Otherwise though, nothing much, event-wise. Went to the gym the other day, watched Castle & infoMania last night, along with a Viral Video Film School special & The Rotten Tomatoes Show. Lets see, anything else? Lots of eating lunch in the park. Got a new bathing suit, it makes me feel old & fat. Which hopefully I will sublimate into going to the gym-- maybe even today in-between work & TV Night. Oh I guess Jenny & I had a nice date at Aperitivo-- well, we were nice & our waitress was nice but I kind of hated the bartender just from overhearing her talk talk talk about "vokka" & "jack."
Collapse