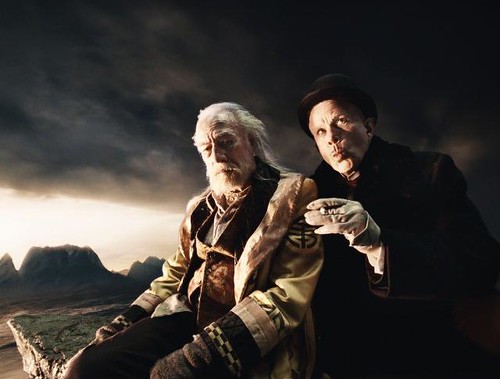 Alright, the phases are done-- either things will or won't, & that is all I want to think about it for right now. So lets see, Sun's day. Woke up & sort of rolled around the apartment feeling miserable. Watched some television-- 30 Rock & Modern Family; both were fine episodes of fine television. Capable craftsmen making craft. oh & Glee which managed to be preachy & boring even while focusing on Kurt, which is a shame. Then Jenny & I went out for lunch at Jpan, on

fatbutts' recommendation. We ate...a lot of raw fish. A "rainbow" dish of sashimi with a citrus sauce, then a dish of shredded fish on a "pancake" which was really more like thin fried rice paper. Then on to the actual entrees of sushi & sashimi. Next to us sat some "dudes," who were kind of awful but not as terrible as I thought they were going to be. Then shopping for fancy foods, then back home. I bailed on the gym & Jenny bailed on her plans with Kira & instead we watched The Imaginarium of Doctor Parnassus. Verdict: dim. It was fine, but damned by its own works. At a narrative level, women only exist in the film to be won or lost...or more likely, manhandled. Really, there was a lot of picking up girls who were screaming "let me go!" & plenty of weird rape overtones. Couple that to the fact that every character was unlikable; in fact, Tom Waits as the Mephistophelean Mister Nick was easily the most identifiable character? I mean, sure he was The Devil, but he's a fair gamesman. Really, Tom Waits was the stand-out in the film; he was great, grandiose even. Tony was smug & unlikable, which is fine, since that is what it is meant to be like. Eventually Parnassus is sort of alright, when you realize he is just the guy who always makes the deal with the devil, always takes the bet. Anton was just always gross, & I'm sorry Verne Troyer, but seeing you in The Surreal Life ruined your characters for me. Sorry. On a technical level, I think the combination of Gilliamism with computer animation didn't work, didn't click. It ended up looking...cheap? It has to do with cinema language, with how we, as consumers of art, suspend disbelief. Stylized animation means something to the viewer, & CGI means something else. The combination-- especially as we came to the table ready for Gilliam-like scenes-- just made it seem like a made for television Willy Wonka movie. The multiple replacements for Ledger on the other hand? Do work, & well. They are seamless & plausible within the givens of the movie. The one thing lacking was a fitting endcap; Colin Farrell plays Tony in the dénouement, which was lacking narrative impact in the absence of Ledger. Missing a bookend. Still, nothing to be done about that-- just a sad unfortunate consequence of Ledger's death. He'll be remembered for The Joker, not for this film, & that is okay with me.
Collapse