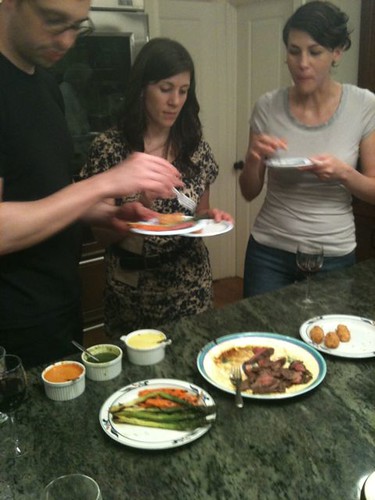 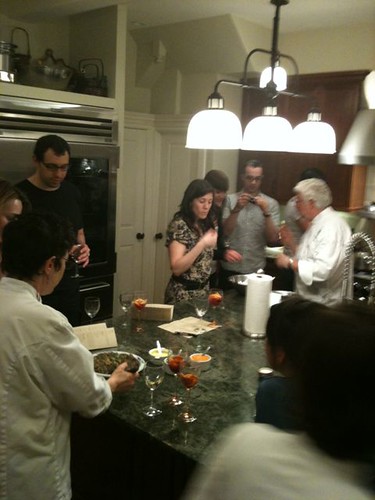 Tapas & Wine Pairing at The Oakridge Kitchen. We've previously had cookie making lessons & also a brunch session there, & like, Kira & Nino & Judy & Robert are my tribe, right? So all that out of the way! The cast & crew...well it was pretty lively, actually. Friend Donna was there, but everyone else was a newcomer. Some people from the Gym Cult, some of Nino's co-workers & Kira's former co-workers. There was live tweeting of the session? So let me just hit the rundown, before I lose steam. We got there & made some hors d'œuvres-- quince paste & cheese, sardines & pears, chorizo & grape & pâté and pepper & caper berry. That last one was the best of those: do you know about caper berries? They are something, a thing! We had warmed up with a little sangria, & then there was the first wine tasting-- the wines were really inexpensive, as in, if you liked them you could easily buy them all the time. They are realistic bottles in the $8 to $15 range. Starting with the Segura Viudas Cava. A little bubbly! Then we cooked up a Spanish Tortilla (like a frittata sort of) with spinach, currant, & pine nuts. Pine nuts! That is an ingredient to put in the next egg dish, for sure. Robert did a "chef flip" for the crowd, where with a twist of the wrist on the pan he turned it over. I liked the tortilla a lot. There were also Patatas Bravas-- fancy fried potatoes, which we promptly drenched in alioli (same thing as aioli), or the Romesco (red pepper sauce), or the Salsa Verde. Up next was more wine: Martín Códax Albariño, a white I liked a lot with the seafood! Oh seafood, right! Because then we made Shrimp & Scallop Empanadas. I am perhaps not the best maker of dumplings, but since we baked them rather than fried them, it worked out. There were also Piquillos Rellenos, which I neither helped with nor ate-- peppers, blech! Even though I did eat some peppers with the caper berry & pâté. Then, more wine! The sommelier was not shy about filling glasses, so there was wine flowing constantly, so what I mean was, another wine lesson. There was a last minute substitution & we ended up with Marques de Caceres Rioja. I think I like tannins in wine? There wasn't much to the red, though I liked it fine. Then the serious real deal entrees, even though we were starting to get kind of stuffed & kind of drunk-- I helped with the Ham Croquetas which were really fun to fry & really neat looking, with the panko crumbs. Also delicious. Then the Grilled Steak with Asparagus, Leeks & Carrots. The steak with the green sauce was really great. By that point we were all stuffed with food & drink, merry & saucy, & so we staggered to the train & rode it home with a guy wearing a Black Flash shirt who was kind of boorish. There had also been some kids in comic book shirts on the way in; guy in Superman t-shirt > guy in a Carnage t-shirt & guy in a Punisher t-shirt.
Collapse