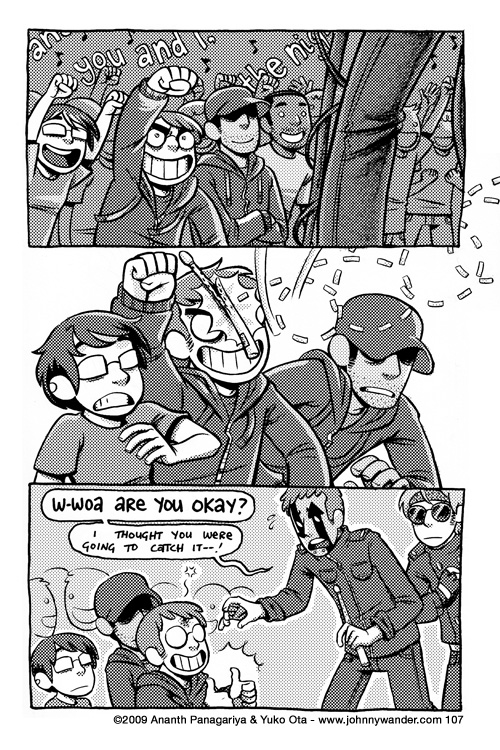 THE PROTOMEN WILL NEVER DIE! Let me not get ahead of myself, though. First, Matt & Kat & Brian & I walked down to d.b.a. in the East Village of Metropolis, where we also met up with Jocelyn. I have only been to d.b.a. once before, with this same (or similar) group of co-workers, but I like it? They have a pretty decent selection of beers on tap & bottles. I had a small glass of Goose Island Bourbon County Stout, which the bartender cautioned me about. "It is a really particular beer, have you ever..." I know what I'm doing lady! I did get it, & I liked it-- I mean, it is just like all of those bourbon beers you've ever had. Jocelyn liked it, & got a glass-- Matt was interested in it, & everyone else was not a fan. Then, because I saw it on the menu & I somehow had gotten appointed the "beer guy" of the night-- I'm no expert!-- I ordered a Schlenkerla Urbock for the group to share-- smoke beer! I'd talked about how at Beer Table I'd had a beer that smelled & tasted like sausage, so it was already kind of legendary, since that is a pretty solid anecdotal description. It was nice chilling with those people-- we're young publishing professionals! Before too long though it was time to go! My doom had settled upon me!

On April 29th, 2010, The Protomen invented rock & roll. Before that happened though-- before we get to that point-- we need to address some minor details. I met up with

toughlad & met Jon & Will. I'd stopped thinking Will was real: my theory was that he was a fiction of Edbury's imagination. No! So hello, handshakes, & lets go into the super weird venue, Santo's Party House. Santa's Moving Castle! It is an odd place, but then, venues are all kind of awkward & ungainly, right? I have no idea how many stages they had, since they were all subdivided. Doesn't matter, really! There were black-lights & smoke machines! I guess most of the time they play hip hop or club music? That is fine, I guess. Then the opening band! Skeletonbreath! First I have to say; they are the funniest bunch of guys? A guy in white dockers with a tucked in shirt, another guy in just a pair of Adidas shorts & nothing else, & the bassist that every bassist is. That guy. The band is an electric violin, a bass, & drums. & actually they were pretty sweet! The bass in particular was set to a level that just vibrated right through you. No vocals, just like...satanic vampire music. Awesome-- & whenever the band would say the name of a song it was always something great like "Bloodletting" or whatever. They had some trouble, a whole lot of trouble actually. Technical problems like-- the bass pedals kept shorting out, so they, over the course of the show, just kept unplugging one after another. The drum kit was slipping, too...which leads to their tension with the venue. They had tried to brace the drum with a monitor...& a guy from the venue just came on stage, grabbed the monitor & took it away. Sorry! It also led to one of the stand out lines of the night: "More violin in the monitor, more bass in the monitor, more giving a fuck about the monitor!" They were the underdogs & the crowd was on their side because of it.

The last time I saw the Protomen the crowd was slim, the lights dim. Only like 20 warriors came from the Deep Place of Gotham to see the Robot Resistance Force that is embodied in the Protomen. This time, that was not the case! There was a strong crowd, & the caliber of geek seemed ready, primed, sly. We were going to see a Rock Opera about Mega Man, & by all heaven's armies, we did. There was a bit where I couldn't divest myself of a plastic cup, but then remembered-- unity of purpose! So I passed my cup to someone who passed my cup, till at last it reached the bar. We are the warriors! While they were setting up, someone yelled "you are my hero!" & James yelled "I'm my own hero, just like you taught me!" The Protomen really liked that. The set was intense-- I'm still hoarse! We threw our fists in the air-- we had our fists in the air unless we were busy clapping our hands. Or throwing the Wiley "W" because well, somebody has to. I do wish Turbolover had more songs-- he's such a compelling stage presence! Also, I wonder about the conductor! There are like, 12 people in the band-- I guess you need a conductor! Super great, & as per the last time, I saved my choicest high-five for the girl who sings Emily's parts. Argh, the Protomen are great. I won't go through the set-list-- who can remember! Awash in the raw power! There were a lot of songs off of the first album. Oh, & I think sadly that the helmet mic has to go. It is just dying, dead. So. The Protomen. Are an amazing band; Act II: The Father of Death may be the perfect album, & their live show is just an incredible piece of music & theater. There was a moshpit with the hypeman of the band for a song, & they closed with a cover of "Total Eclipse of the Heart!"

At home, we had to call the fire department because someone's carbon monoxide detector was going off.
Collapse