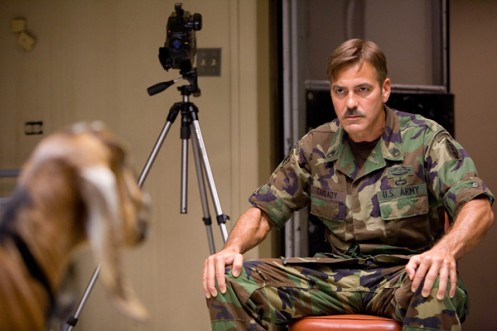 There are some irons in the fire that I don't want to dwell on, but it might be weird to not at least acknowledge them. Just some potential, some chrysalises...chrysali?...on the branch. We'll see if the eggs hatch, we'll se if the tide comes in again & if the sun never shows its face again. So yeah; stress. I am not used to having a case of nerves, but basic anxiety is part of the wetware. Rejection & all that. Whatever-- I'll lay down, take a breath. Last night Jenny & I watched The Men Who Stare at Goats which...might be about a guy I know? I guy I took some kung-fun classes from when I was in High School. He's in some books as being able to do the dim mak-- he did it so some goats. Also, he runs a dance studio as part of his dojo; or his wife does, but I'm just saying that I see his shadow over the story. The movie is fun-- more dark comedy than anything else. Just a chance to listen to George Clooney & Ewan Macgregor talk about being Jedi. Which for the record-- the Jedi in Men Who Stare at Goats are far better Jedi than the ones in the Star Wars prequels, which is kind of heartbreaking. Anyhow, I liked to pretend George Clooney's character was basically Steve Rogers (aka Captain America) & that made it a lot of fun-- it also made me think that having a story where the Super Soldier becomes the Sorcerer Supreme to make way for the next generation? Might be kind of fun. Anyhow, the film is light & easy, & even though I was fussy & didn't feel like watching a movie (see above) I was drawn into it. Clooney & Bridges make the film, & conversely it is worth watching just for them. Otherwise, that is about it. There was a car alarm-- just a klaxon incessantly honking in one loud gasp-- that I went to check out. Yep, an alarm, not some jerk leaning on his car horn. We called 311 & they told us...to call 911? I hate that. It isn't an emergency, I don't need to call the emergency number! I guess plenty of other people do call 911 for their nuisance complaints. I understanding adapting to usage, but I still wish there was a legitimate emergency system...though yeah, that would be hijacked by people calling about their minor problems before too long. Oh well.
Collapse