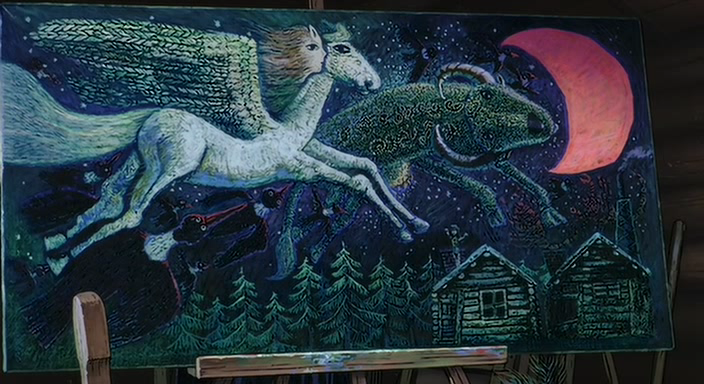 Last night's movie was Kiki's Delivery Service, an older Miyazaki I'd never seen, more in the vein of My Neighbor Totoro than Howl's Moving Castle. The first thing you have to sit through (or more realistically, fast-forward through) is a white guy telling you how important Miyazaki is. Listen, I don't need convincing but more to the point, I don't need crap built in to the front of the movie. I appreciate trailers as part of the cinema experience & have tolerance for them, but things are getting out of hand-- as piracy advocates & DRM-enemies will let you know. Anyhow, a few things of note: Miyazaki appears to have a thing with vehicle safety...or the lack thereof. Between Kiki's misadventures on her broom & on a bicycle & the driving in Ponyo, Jenny's watched a decent chunk of his films peeking through her fingers. Also, is Ursula's painting (above) the worst painting in the world...or the best? The saddest part is that she never gets to talk to her familiar again? Apparently that is the case in the Japanese version; the Disney version changed it but then they re-released the film to be more in tune with the artistic spirit & well:

In the original Japanese script, Jiji loses his ability to communicate with Kiki permanently, but in the American version a line is added which implies she is once again able to understand him. Miyazaki has said that Jiji is the immature side of Kiki, and this implies that Kiki, by the end of the original Japanese version, has matured beyond talking to her cat. (Wikipedia)

Nothing much to report from the gym last night. There was a girl there dressed like a flash dancer from the 80s, with a ripped t-shirt over her shoulder like she was a Claremont Jubilee or something. I couldn't tell if she was attractive, the razzle-dazzle of her outfit was too distracting. Which meant fashion was doing its job, I guess. It made me think about how much I want a fun like, Van Lente Dazzler/Jubilee comic. Anyhow, all the free weights I wanted to use-- the adjustable bent-bar, the 60 lb & the 70 lb barbells-- were busy, so I grabbed the 50 lb & did some exercises that I don't normally do, & some I do normally do with a higher number of reps. Otherwise, oh-- Serenity was on the Siffy channel, so that was pretty okay-- I would have stayed to watch more/do more on the elliptical machine, but I knew Jenny was getting hungry. I got us Mediterranean food & just gobbled up all the meat. Skipped a shower, which is kind of gross-- I mean, I don't get smelly or anything, but I feel sweaty, like there is a coating of dust on me.
Collapse