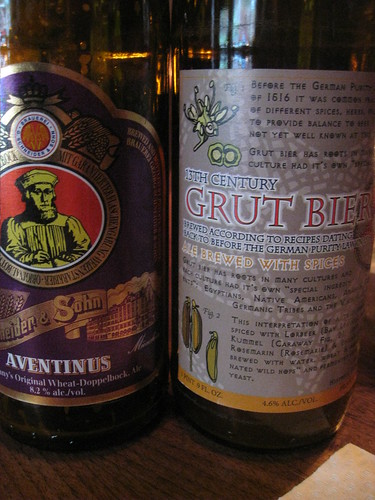 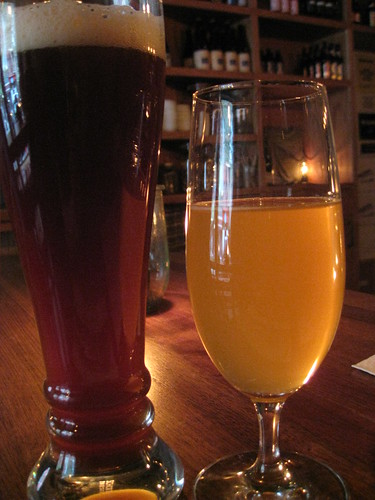 I've been pretty busy at work, & pretty busy at home so I have fallen behind! Also most of the business has been treading water (dark water!) or being busy being lazy. I'll recap! Starting with Odin's day: Television Night!

elladorian were over, & they were being super cute! I can't remember how or why but it was true. We watched an episode of Avatar: The Last Airbender & an episode of LOST. It was a Ben Linus episode but it was still pretty boring. More soap than anything. Then America's Next Top Model. See, there isn't anyone to root for this cycle. These girls are boring as hell. This week's episode was the obligatory house drama episode. The girls have sorted themselves out by class, & it is almost heart warming to see that class trumps race in the ANTM clan. So yeah, a boring episode with a yawn of a photo shoot; even a guest spot from last cycle's Nicole couldn't cheer it up. & watching darling Laura & Bianca chuckle about an episode that clearly wasn't filmed when they shot the spot is sort of nice but not good, you know? Also, Maggie gave me the Zimiamvian Trilogy for my birthday! They are set in the same universe as the wonderful Worm Oroborus.

Thor's day was the actual day of my birthday. I wanted to go to Beer Table, so well, we did that. I had Scneider Aventinus (brown sugar, banana, clove, sherry, sweet spice) which was fine but if you like that kind of thing I'd just get the Well's Banana Bread Beer. Then I had a Founder's KBS (ripe, wood smoke, warm, bourbon, malty, vanilla, fresh coffee) which I did really like. Jenny had the Professor Fritz Briem Grut (bay leaves, caraway, ginger, anise & rosemary) again, & it really is an amazing beer, like, my favorite. We also had a slab of inch thick bacon, some potatoes, & a salad. Despite the heavy beer & meats, Jenny insisted on dinner & wouldn't agree to get something to go-- in fact, she insisted that we eat outside at Flipster's, which: boy was there egg on her face when it started to rain & also she was too full the rest of the night. Then I got some more presents & we watched Glee. Speaking of! My enemy glee club, to fight Glee's "New Horizons" is "A Choired Taste." Like "acquired tase!" Get it? 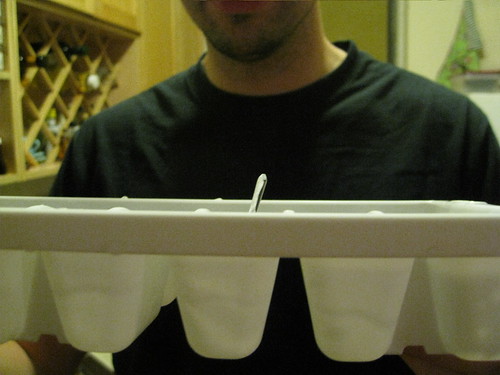 The ice-thing above didn't happen on Freyja's day, but I can't remember when it did happen, so I'm going to pretend it did. Jenny went to mix a cocktail & noticed...what is that! There was a weird gravity defying spike in the ice cube tray. I still don't know what it is, or how it happened. It just is a little ice cube tube! Not a foreign piece of ice lodged in it, not a water covered pick-- were like, bacteria making bubbles? I don't know. Anyhow, last night all we did was settle in & view a movie. I was tired as hell, & so was Jenny. The film was Howl's Moving Castle, & it was predictably awesome. We've been filling in our Miyazaki gaps, & this was one I was really looking forward to, & it was worth it. I've never read any Diana Wynne Jones but clearly I ought to. Miyazaki's mix of the magical, the mundane & the otherworldly is just really on display-- the world of the film is akilter enough to be recognizable but also strange enough to make the supernatural events seem plausible. I think it is most a piece with Spirited Away, or like a possible future of Princess Mononoke.

Now today! Here we are on Saturn's day. I am tired again! I still have to go to the gym, but that is the totality of my plans. I had leftover Thai food for breakfast & then Jenny & I went to go see Kick-Ass. I am not a fan of the comic-- Millar can do good work when he's reigned in, like his Superman Adventures but the more creative control he has, the more it becomes a mess (see also, the entire history of The Ultimates, though Loeb put the bullets in that thing's head). See, Mark Millar has one story in him, & that story is basically Frank Miller fan fiction. He just wants to write mid-nineties comics about extreme, gritty anti-heroes. I mean, really-- look at what he's got under his belt. The Authority, The Ultimates, Wanted, Kick-Ass...all pretty much the same thing. There is an element of it that can be fun, but it gets old real quick unless it is tempered with something else. Anyhow, the comic book Kick-Ass is pretty sparse, so I hoped there would be room for the movie to use the best parts of the book as a jumping off point, & it did. I ended up liking it a lot, & of course like everyone else whose seen it can tell you, Big Daddy & Hit Girl clearly steal the show. I thought Nicholas Cage was inspired as Big Daddy, I thought his Westian performance was transcendental, & Chloë Grace Moretz as Hit Girl is really...you just want her to murder everyone especially hard. Somebody at the theater called it "Pulp Fiction for children," which is pretty hilarious. Anyhow, now we are home drinking coffee & doing the puzzle that Jenny got me for my birthday. & I need to dig deep eventually & go to the gym. Or at least I'm supposed to. I'm tired. 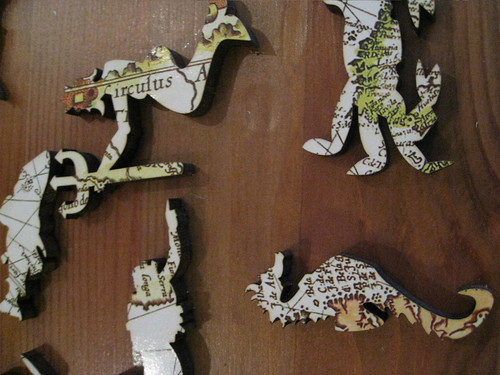