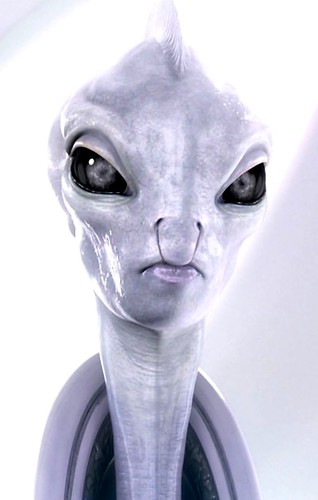 fordmadoxfraud game, Orrery (David's recap is here). Erica & Edbury couldn't make it so it was just me,

skycornerless. We had finished last session in a cave after killing some giant bugs-- this session started in the same cavern, with a flesh golem crashing through the walls! AH! Frankenstein! He was followed in short order by falling rocks from the ceiling of the cave, then by clanking robots & then finally by a strange alien-like creature. The battle was a bit three-way, with the robots & the alien confused as to what they should be shooting. We finally bloodied the golem which ran away; then it turns out the alien-creature could understand goblin, which it called "Technician." The first thing in Orrery I could talk to (besides a boy possessed by a fish-alien-demon)! The things name was Manufactorie & it only really looked at sortiligios-- the necklaces we wear. We've tampered with the sortiligios-- James' drow wears like, five & Emily's gorgon switched with the baby griffin. It was confusing! But fun. We went into Manufactorie's workshop & fooled around with his stuff, & I got lots of treasure; I'd gotten an Orb (with Mage Hand) from the lava, but I also took a dead alien-creature's magic clothes. I wear all the clothes we've found so far; alien jumpsuit, rags, furs. Then James went off & skirmished the flesh golem to death by himself. I should mention! Before I forget, that things were kind of touch & go there! At one point everyone had dropped unconscious except my character! Still no deaths, though. Manufactorie wanted my character to stay & be "Technician" & Bogey was sore tempted-- instead I'm going to try to get Manufactorie to come steal a Docia with us.

The King of Attolia by Megan Whalen Turner.

On the rooftop, god
laughs, "don't fall, Eugenides!"
The two share a name.

This is the third book in the Queen's Thief series, though it actually seems like the fourth. I don't know why I think that. Maybe because the author interposes a new character (the guard Costis) between the reader & the focus character Eugenides. Which I don't mean as complaint; switching view points lets you have some distance to appreciate Eugenides, since, well-- that is sort of what the series is about, yes? Enjoying just how clever the (former) Thief is? I will gently complain-- commiserate, tease!-- that once again this book is very backloaded! All these books follow that format; things are not how they seem at first! The beginning drags its feet, mopes, sulks, then finally explodes into a frenzy of invincible action. Again, as per the first two (but especially the second) the real strength is Whalen Turner's grasp of politics & her ability to communicate that-- how the Mede might prosper from providing aid, or how the exile of certain political figures could be a reward to them & destroy their clan all at once. I'd say there is a better than decent chance that I'll just go on ahead & read the next one right away. Yes, I probably will, I will probably read it next. Serial. So consider me a fan. I complained about there being an "Extra" in the form of a short story-- I finished! I had book-finisher's catharsis but then there was...more! Unrelatedly! Which I liked for having a pony & a crossbow wound for a nine year old. It made me want to run a World of Darkness: Innocents game.
Collapse