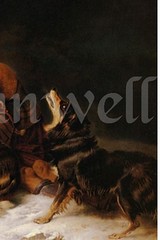 Two snakes on the Tree.
The Gold says "taste of Knowledge!"
The Black, "eternal Life!"

This is the most recent of

kingtycoon's multi-part series on the War of Kliali Succession, his masterpiece ouvre on politics & human nature. While fantasy, he takes more from William T. Vollman & Lafcadio Hearn than from the pulps. I had told Kingtycoon prior to reading that he was going to have a hard time topping Windheart, since I quite enjoyed that & really ended up admiring the protagonist. His reply was that he planned on alternating themes in the series-- every other book would be interesting things happening to decent people, like in Windheart, but other-every book would be bad things happening to terrible people, like Raindrinker, & well, Solemnwell. He promised & delivered; really terrible things happen to the people of this book, that is true. Kingtycoon doesn't flinch away from rape & rapine-- but at the same time he acknowledges the implicit rape that traditional fantasy glosses over. The seduction of the succubus, the hypnotic domination of the vampire; that is here, but stripped bare of romance, laid out as the rape it really is. I know, I keep talking about rape, but really that is the jarring moment, the tipping point, on which the book hinges. The murders, the witchcraft-- sure, they aren't pleasant, but there you have it. I think having written this book actually, Windheart bears revising-- the appearance of the spirit in Windheart should be quickly rewritten while the spectre of Solemnwell hangs in the air. In Solemnwell I think the most memorable bit for me ends up being the Weirding's first approach to the Yellow House. Solemnwell is steeped in font changes & secondary texts; the book dances between viewpoints & has some of the same (& purposefully included) problems as the Gospels of the Bible-- scraped pages & all that. I will also say, for all that Kingtycoon may tease me about the Science Fantasy elements of Oubliette, he certainly ends this book with a very Science Fantasy twist. If you haven't read any of Kingycoon's books, I definitely think you should pick one up. They are episodic, not serial, & you can start at any point in the spectrum.

I can't understand why White Wolf hasn't published an updated Vampire: the Masquerade (V:tM)for the new World of Darkness (nWoD, contrast to old World of Darkness as oWoD). I mean, it just seems like printing money to me! Wouldn't...everybody buy it? You could revise it to your hearts content, even. Make whatever you want to be optional, optional. I mean, off the top of my head-- you could make all 13 of the clans into Vampire: the Requiem (V:tR) style bloodlines. That is one section there. You could make rules for different covenants-- maybe the Camarilla, the Sabbat, the Iconnu, & the Black Hand. Optional. You could include rules on how to make the V:tM clans jive with the V:tR covenants, or how to use the V:tM sects with the V:tR clans. If you asked me, I'd make all the V:tM clans as their own distinct clans, but without signature disciplines...then make the V:tM signature disciplines into common bloodlines. That is, how about making nWoD V:tM clans with all basic disciplines; exempli gratia make the Malkavian clan disciplines be Auspex, Obfuscate & Nightmare & then have common bloodlines like the Malkavian antitribu who get Dementation, or Camarilla Malkavians who get Dominate or Daughters of Cacophony who get Melpominee. See-- you can reconcile continuity, which fans get off on. This is just the sort of stuff I think about, sometimes. Anyhow, these are the kinds of books I want from White Wolf, & I hope that this summer's Mirrors is the start of them fulfilling that promise, something in the vein of Mythologies, which I thought was a great book but which doesn't look like it is dripping with alternate rules & new disciplines. Really, that is the angle to play up; don't players buy books to see what new powers it has?
Collapse