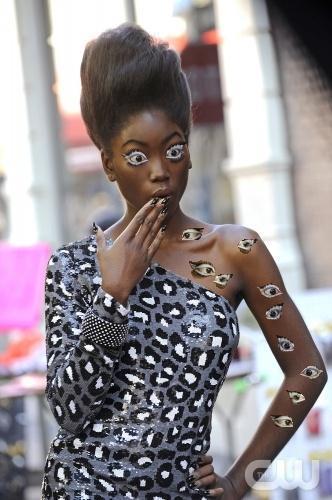 Television night! Like lightning! I came home after work & fussed around in the apartment-- watched an episode of Leverage & beat a level of Mega Man 9. It was the first part of the season one finale of Leverage, "The First David Job," which I thought was really rather tight. That is a fine little genre program. Then

elladorian came over, with food for the late-arriving Jenny in tow! Me, I'd made myself grilled cheese. I put on Avatar: The Last Airbender for David & Maggie-- "The King of Omashu." David missed "The Southern Air Temple" & "The Warriors of Kyoshi," but I am all about forward momentum! After that, we put on LOST. We are so far behind, man. The episode we watched was "Sundown," which is a Sayid episode. Frankly, I can only root for the "bad guys" now-- like, killing Dogen? Hell yeah kill that guy. He's tried to kill you like six times. All those bastards at the Temple ever did was attack people or drag them around-- literally drag them. Screw them. After that, America's Next Top Model. No real heroes to root for this season; all you can do is let yourself be filled with scorn for people. They sent home Hawaiian Coroner, who is not as awful as Did I Mention I'm A Mom. Anyhow Crazy With Jesus is maybe a model, as is Crazy With Buffalo? Maybe this is the season of not-traditionally-pretty girls being models instead of boring pretty girls? Or it is just boring. So there you have it. Rugged with boredom! Oh, except yesterday & today I had lunch with Brian & Jocelyn & Kat. & I had lots of cathartic spring cleaning at work; I threw out four dumpsters worth of stuff! & made some major chops in the cherry tree of labor. Also Kelley shot chocolate scone crumbs everywhere.
Collapse