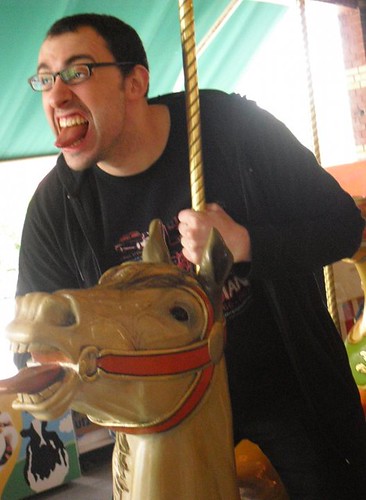 Sun's day I woke up, fooled around watching television or playing video games, I don't know. I made brunch for Jenny & me-- asparagus & grilled cheese with turkey. It was alright, but needed more cheese. Eventually I went to the gym; another short work out of an hour's length. Still, Sun's day & Saturn's day in a row, that counts for something. Staying on the wagon, at least. Then to Carla & Kenneth's for Ēostre. Carla gave us prized samples! Little bottles of absinthe & gin wearing bowler hats. I don't like sweets, so airplane liquor bottles are the best presents. We snacked on hors d'œuvre & Carla filled up our glasses in cunning ways. We trucked home & I watched another episode of Leverage before bed. So that was Sun's day!

Moon's day was a horse of a different colour entirely. I woke up extra early to catch a shuttle to Westchester, home of Xavier's School for Gifted Youngsters. There is a conference this week, but Moon's day was the only day I attended. I set stuff up, ate a hamburger for breakfast & a hamburger for lunch, went to a meeting, ate a dinner, got props from the president. Not shabby. They had the Dungeons & Dragons Basic Set in the hospitality suite, so I'm a little bummed I didn't stay longer. I could have finagled some nights there, but it works out better this way in the long run. Anyhow, hanging out with work people & schmoozing is pretty okay. No particular events of note though-- I got a gold pin though. Treasure.

Tyr's day was nada, nothing of note. Threw stuff away at work; spring cleaning! Then home. I have a smattering of plans this week, starting with Moon's day's late night, then Odin's day's communal television watching, Freyja's day of dungeon exploring, & culminating in Saturn's day birthday celebration. Given all that, I decided to flake on the gym & spend Tyr's day night hanging out with Jenny. We ate burgers-- three burgers in two days! Then we watched Castle & The Fantastic Mister Fox. I quite liked parts of Mister Fox but was saddened by the end. What! The end is that the wild animals live in the sewers & eat human garbage? That is the worst ending to a parable ever! A true but sad epilogue.

Rant. The issue with bicycles is in their integration & lack of reasonable legal standing. I get this. They are more maneuverable than a car, so they want to sneak & ply their way through lanes. They want to have the privilege of the road-- lanes, all that-- but also be afforded the ability to run red lights, to cut across parks, to beeline down a sidewalk, truck down one-way streets against traffic. This is frustrating but precludes the fact that, well, they can. A bike is different than a car, & different than pedestrian traffic too. Me, I am the enemy of the car. The car isn't a sustainable mode of life. They built countries & cities to rely on it, sure. They being an actual evil conspiracy of robber barons. That happened! The hidden monopoly men got together to destroy public transit & took a note from real estate; why not make people go into debt to buy a car! Like a bus for one! So yeah. I get that fundamental change is the only real solution. Especially given the antagonistic relationship between city & state. The commuters! Here is how they work: they live outside of the city so they don't pay taxes on the streets. They do drive & park in them-- they are a serious bulk. Then they vote to lower taxes in their district, & to prevent tolls in the city (which is somehow a state law issue?). Anyhow, I hate them. I think more streets need to become dedicated bike lanes, & private vehicles need to be mitigated against. More trains, always more trains. Also more buses & I'm okay with taxis. Also, trucks are great. I'm down with highways for trucks!
Collapse