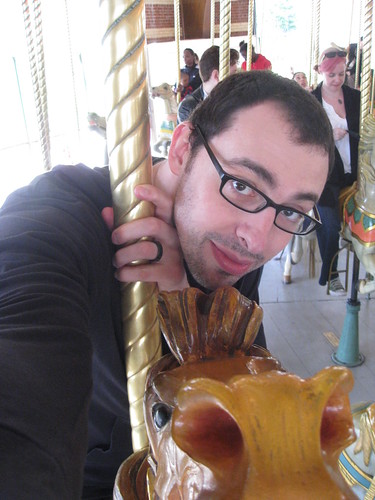 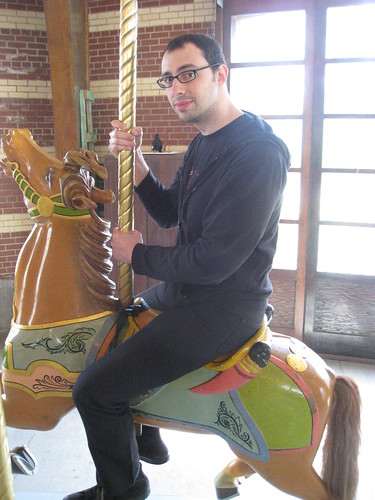 Freyja's day was game; I'll write it up later, but for now I don't have all the digital images to upload. So I'll skip ahead to talking about Saturn's day! That was Sams' birthday party, which started relatively early. Jenny & I still managed to do stuff in the morning-- I might have watched an episode of Leverage & then beaten a level of Mega Man 9 or whatever. That sort of "stuff." Lots of it with Jenny's head in my lap! Then around noon we walked over to Prospect Park. Sams' party was at the carousel, but we had to find it first. I frequently end up accidentally sneaking up behind the zoo in Prospect Park, & that happened again-- but this time, I could use that! Since that is more or less where the ye olde timey Leffert's House is, & the carousel, too. & Sams' party! Thai iced tea, much bread & cheese & fruit, & rides on the ponies. Jenny & I stayed for a little while & then bounced. We went to brunch at Barrio & I was sincerely underwhelmed. I'd only been there once before, for dinner a couple years ago, but I liked it then-- very spicy, as I recall. Back to the apartment, watch Castle & sleepily digest & then PCHOOOOO off to the gym. Lazy little work-out; I'd like to go again today, but we'll see. Then back home again, after grocery shopping; Jenny made pork chops. More Leverage & also infoMania & Rotten Tomatoes & then I guess to bed.
Collapse