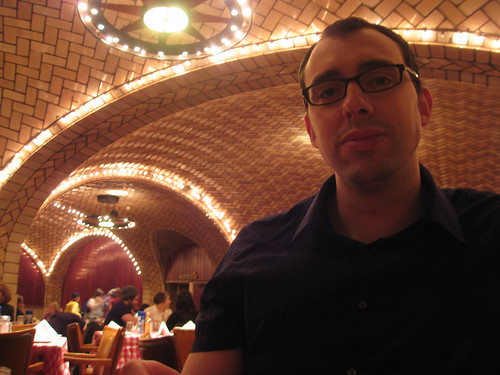 I am a human being! I reject hate & the rule of law to mitigate selfishness! Haw haw, April Fools. None of those things are true! Anyhow, not that we've gotten that formality out of the way, let me start trying to recount the events of the past week. On Moon's day, after work I went to The Scratcher for drinks with Matt, Katy, Kat, Brian & Jocelyn. Or well, for a pot pie, I should say! Here for the record, lest darling Mordicai-me forgets: the beef pie is better than the chicken pie. It has like, full peppercorns in it! Definitely the way to go. After that we went to Kat's place to look at some photos from her physical rehab, which were pretty cool. I also showed them all the Scott Pilgrim vs. The World trailer, which I've been joygasming about all week (along with the rest of the internet). I hung out, sober, for a nice long while, but then I was missing Jenny so I went home. So what, I like my wife better than everybody. That is like, the whole point. I don't know what we did at home; I think I might just have ended up watching episodes of Leverage with her on the couch. She's seem 'em all, but I guilt her into at least being in the room & using the computer. Which is how she watched them, with me in the room not paying attention, so I think it is fair!

Tyr's day Jenny had planned a date for us! I went up after work to meet Jenny at her branch, & saw Steve on the train. Hello, Steve, come to my birthday party on the 10th! We went to...a weird place. The Grand Central Oyster Bar. What is that place? I mean-- first off, oysters in the middle of a train station is...brave. & I am brave, so I had some! Oysters & martinis! People seem to adore it but what? I am mystified by it. It is huge: half cafeteria, half train station. There are like, 70s era plastic seating areas, tables with checkered tablecloths, arching ceilings. All very odd. I don't know anything about oysters, but here is what I do know. I like East Coast oysters better (I don't know what that says about my palate) & I wish I had been eating oysters at Blue Ribbon. It was fine; our waitress was like an old Russian dancing instructor. The bread plate was...crackers, from the supermarket? It was weird. Anyhow, after that we hopped on the 7 & went...to Queens! I haven't been to Queens in a while. Anyhow, we went to go see Jodi dance at the Chocolate Factory. It was a show so much as a convenient audience to allow the performers to workshop pieces. Jodi danced with a fellow named Charlie who did an apt dog impersonation. The next girl was very still. The last piece had a plastic skeleton. They were all followed by a question & answer: "If this dance was a landscape, what landscape would it be? If the sound was a container, what would it hold?" As you can imagine, I was very good at answering those questions. "A very old Crispin Glover! The interrogation room in a police precinct!" Afterward we went out to a bar with the dancers & I drank water & spoke to a girl about David Lynch in enthusiastic terms. Note to self: you are incredibly charming. 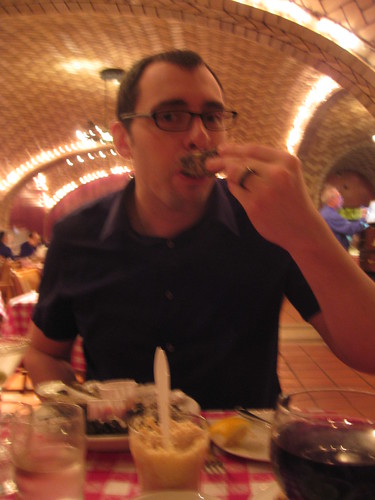 The Thief by Megan Whalen Turner.

Coyote-Loki,
The Thief God, the Clever One
here "Eugenides."

Every so often Jenny flips for a series & suggests I read it. Since I'm generally agreeable, & I like YA just fine, & I like Jenny better than fine, & she gets a sparkle in her eye when I say "yes," I generally agree to read it. The Thief is one of these; she went & bought the hardcover of the newest book in the series, along with all the rest in paperback, which means she really likes it. I liked it, as expected-- I only mention Jenny's endorsement to explain that I knew going in it would be good. My expectations were high by default, which is always risky. Fair warning; the book is backloaded. Also fair warning, every girl I know who has read this is in love with the protagonist. In love, major love. I don't get it? I wanted to kick him a lot. Once he got into the dungeon (which was kind of neat) he improved. The setting of the book is pseudo-Grecian, & the landscaping is really intense; the description of the world, between forests of olive trees & volcanic planes, is really very vivid & lush. The best thing I can tell you about this book, however, is that I put it down & picked up the next one in the series-- Queen of Attolia-- & started reading it next.
Collapse