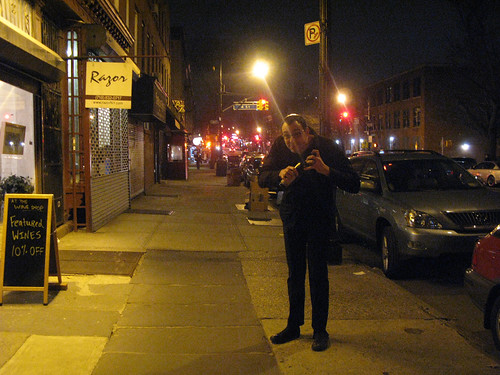 I forgot to mention that on Thor's day I got together with Lilly at Bar Reis to help her study for a Classics test! What do I know from Classics? I mean-- I'm interested in general, & put retellings of the Iliad & Borgesian elaborations of the Odyssey in my best books of the year but I'm not like a scholar of the scene or anything. Still, I was flattered that she asked & I figured "hey, a sounding board is helpful to anyone! So we met up & studied! Once she relaxed, I was pretty redundant, since she knew her stuff. I had a winter wheat beer with a blood orange garnish; then I got all Baader-Meinhoff about blood oranges. I found out Tracey had a cocktail with them, then Toothpaste for Dinner (aka Kompressor) had a comic about them. Lilly & I tidied up our lives, she took a video of me, I bought a bottle of wine, & we went out separate ways. Jenny & I curled up on the couch but I can't for the life of me remember what we watched on television. I try to track my media, but it has slipped into the crevices of my grey matter. From there it was on into my lazy Freyja's day off, & the rest of the weekend, which I've already talked about.

Sun's day was a lazy piece of dreary rain. Jenny & I knocked around the apartment-- she's sewing the duvet in a big project. See, the duvet cover that we have is sort of...stupid. The flap's buttons are kind of in the middle, so your feet kick it apart & well; it got kind of ruined. We ordered a new one but it was...ugly. Now Jenny is just sewing the flap closed & then cutting the top to make an opening there. Fascinating & crafty, that's my number one dame! We watched The Box as well, since we like Richard Kelly & Leigh recommended it to us. The verdict? A stressful snoozer. There were a few moments where it came close to transcending & being good but it never ended up coming together. Give me The Mothman Prophecies-- that is the nearest comparison in tone I think, but without the heavy moralizing. It made me realize what movie I would really, really like-- basically a NASA instructional video about space exploration, but with creepy music, paranoid film shots, fuzzy indistinct humanoid figures lurking in the background out of focus, mysterious phone calls, but no plot; just a sort of educational program about space. Isn't space creepy & awesome?! Then I realized that this is basically what 2001: A Space Odyssey is like, & I was well pleased. Anyhow, the framework of the short story really showed; it wasn't served well by being a feature length film; the Twilight Zone episode must be better if only because you only need an hour to spool it out. The unspoken demonization of women-- they are the ones who hit the button!-- was sort of forgivable since I assumed it was an "Eve" thing, but really? Really. Anyhow, Kelly weirded it up, but it just didn't get weird enough for me, I guess. MONKEY PAWS! I wouldn't have pushed it, on the sole basis that, well, I am suspicious of genies?

Anyhow, then I went to the gym, back, & then poof! Jenny away to hang with Kira & Nino & decompress. So what did I do? Well I trolled the hell out of the Gchat, hitting up my homegirls Theresa &

ranai. Drop a dime! I should remember to use video chat more often, it is fun. Plus, the internet! I have it at home. Anyhow, I closed out the evening watching the first episode of Leverage. See, I watch it now, but previously it was just one of those shows that Jenny would have on that I didn't hate but didn't care about; I'd leave the room or browse online rather than pay attention. Eventually though, I figured out that I liked it. So now that we have streaming Netflix on our Wii (hollah!) I'm watching the first season. Parker is crazier! I like that. Also Nate & Sophie actually have chemistry-- they flirt, rather than act lovelorn. Better! So yeah, I think the first episode holds up. Pretty solid. Then finally Jenny came home & we went to bed. 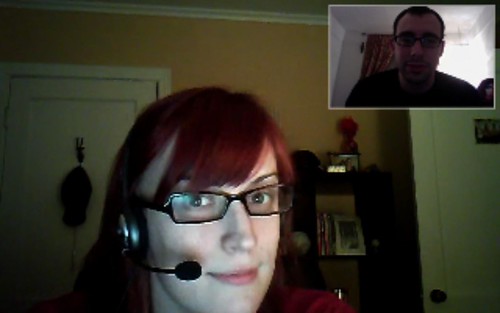