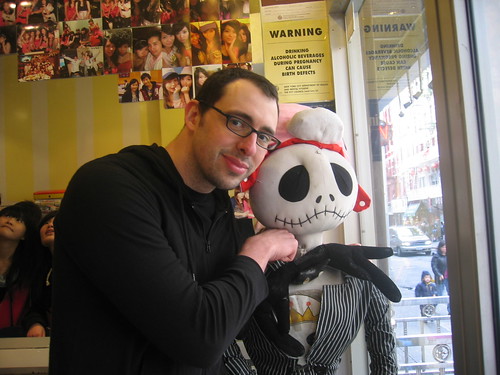 (Remember two years ago when we ended up here after getting our marriage license?)

Yesterday was a busy little day-- but one tidbit before I get into that! On Freyja's day we watched District 9. Well, I had the day off, so I goofed off all day; Jenny had a half-day so she goofed off half the day. We watched Wanda Sykes in a comedy special & some other minor stuff-- we got streaming Netflix for the Wii & that is pretty slick. When Jenny first came home she was crazy fussy-- I mean, she actually told me not to "get up in her grill!" when I went to kiss her hello! Then she ate something & she was fine. I went to the gym, & gosh I don't know. Life happened. We had ribs from Rachel's, because Jenny discovered that they are excellent. Anyhow-- District 9. The big question we had going in was-- is the movie racist? I mean, that is what we'd heard? The verdict: not so much with one big exception. That exception being the subtitles-- the black characters are subtitled (while speaking accented English, which is redundant to say) the white characters are not, despite the fact that the black South African's accents are much more penetrable than the Afrikaaner's accents. Now-- the movie is theoretically a documentary; so is that racism part of the frame sequence? I don't know. The thing everyone complained about-- cannibal Nigerian warlord guy-- wasn't nearly as big a deal as I was led to believe. Anyhow-- my favorite bit about the movie is that the scale of weapons made sense. I mean-- I don't care how awesome your technology is, getting hit with a missile is going to suck. This was the problem with Cloverfield-- if you are made out of meat, bombs & missiles are going to kill you. Sorry! I am down with suspending disbelief but there you go.

Then Saturn's day! I supported the Titanomachy but I do still have a weak spot for old Chronos. Once I got my act together & sussed out the finicky train lines, I was off into Manhattan to meet up with long-time internet pal

arlingtonguilt, along with her gentleman caller Alex, his cousin Alex, their friend Aviva, & eventually their friend Richard. The original location for lunch was scrapped, which ended up for the best since the backup was Freeman's. I never knew this place existed, though I'm guessing everyone else does? Off Rivington, over near the Bowery, there is a tiny little alleyway to nowhere-- that is Freeman Alley & that is where Freeman's is hidden. The food was really pretty effing good! There was an artichoke dip which, well; good artichoke dip is what it is. I had hash made from asparagus & cauliflower with eggs, which was fine & good, but I was sitting next to Aviva & she ordered the other dish I had been considering, the smoked trout. Uh, that smoked trout is amazing? I had, you know, nibblets. The restaurant specializes in wild game & organically farmed stuff, & has taxidermy all over. I also had a cocktails-- a Ressurection #2 or something? It was aces. The taxidermy led me & Aviva into talking about shared wunderkammer topics. After lunch we walked all around Chinatown. I was vastly under-dressed-- chilly!-- but it wasn't a big deal. We went to a noodle place, but no one was hungry. A bakery, where I got a coconut egg tart for (less than) a dollar. A bubble tea place, which was the same one I went with Jenny when we got our marriage paperwork. Then a book & ink shop, for the artists to buy ink. It was a nice time; then zip, onto a train & then home.

That was just the start of my day! I came home from all that, did who knows what. Whatever I do when I'm alone. Thought about my imagination. Whatever. Wrote on the internet. Then Jenny came home & we made plans to get dinner with Amy & Omry. First we maybe watched infoMania; I don't know! Memory, it is a heck of a thing, flawed & yet you are forced to rely on it. Anyhow, we went to Benchmark, which is the "secret" place behind Loki, though now it is open to the street & I guess own Loki's back patio. Actually, woah, it didn't even occur to me how awesome outside dining will be there. Guys, I was kind of enchanted with Benchmark. It was crazy. Service was a little cluttered at first; I guess there were lots of no-show reservations? Anyhow, we got there before Amy & Omry, but they showed up soon thereafter (& still early themselves!) & we made the round of hellos. Jenny never comes along to their parties, being introverted, so Amy & Omry had teased me about her being my Niagara Falls Girlfriend. Anyhow, the meal was on. I got the gnocchi with lamb stomach, which was crazy delicious. Jenny got pork chops, which were enormous & surrounded by polenta. Or wait, I'm told it was grits & endive. Omry got the lamb shank, which was also enormous-- I think their lamb was killer. I mean, for real, that lamb was good, both his & mine. Amy got what sounded the best-- halibut that was "shrimp crusted," meaning they breaded shrimp, then put those around the fish as a crust. Anyhow, it didn't work; it was bland & the shrimp canceled out everything. My cocktail was a "Spice Voyage"-- gin & herbs! It managed to be sweet & savory, to be a rainbow of tastes. It was a for real adventure in my mouth. Most of dinner was us busting up each other laughing; I feel like it was friendship success! & Amy gets the reward of bonus XP for asking the waitress how old she was. Anyhow, the venue also had a little history placard in the bathroom for you to read while you eliminate nitrogenous wastes, & I'm a sucker for that. Some of the archaic surveying equipment on the walls was excavated while they were building the restaurant. So yeah-- two five star meals in one day! Then home where we closed the evening with The Rotten Tomatoes Show & 30 Rock. 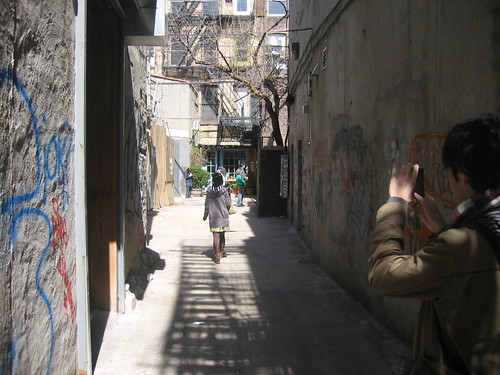