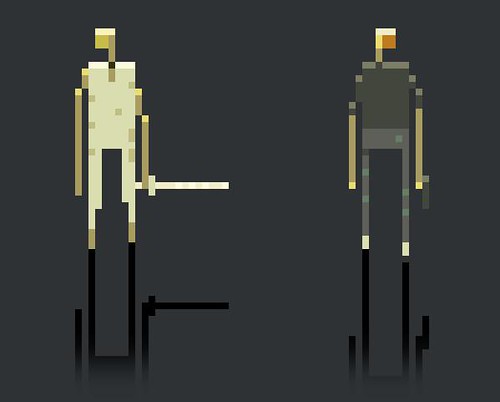 (From "Less Talk, More Rock" by the Superbrothers.)

In my post yesterday I used "Elf" & "Dwarf" because we have a common culture language for what that means. You & I might disagree about what traits define "Dwarf," but there a whole host of other, unspoken traits that we agree on without considering. Like for instance, that they are short-- which we all probably agree with, or that they have beards, which most of us probably agree to. Heck, "Short" could even be one of their keywords. Or that they live underground-- so we could say "Short & Subterranean." Though the real power behind "Dwarf" & "Elf" is that we don't need to define it, we don't need to come up with three pithy words. You have a heuristic for it, even if our images don't overlap. It just highlights a problem with a lot of these sorts of things-- human! What the hell does that mean. Now, this is sort of a problem of perspective-- human beings are the ones writing this, leaving us, well, kind of confused. & you could easily spread the mantle of "Human" over the traits you ascribe to "Elf" or "Dwarf"-- I mean, picture the Venn diagram overlapping between "Elf" & "Atlantean." Of course you could then argue a difference between "Atlantean" & "Human"...which just starts going in circles.

It is also easy to loose track of what you are separating from what.

toughlad listed "Bipedal" as one of his traits for "Human" which misses the point. Sure, bipedalism is important to human beings-- or rather, Hominids. The thing is-- we're trying to differentiate between creatures that all share that trait in common-- Dwarves, Vulcans, & Neanderthals are bipeds, too (though I confess that making Dwarves knuckle-walkers is interesting). This is something I was going back & forth with

kingtycoon about-- humans as colonial, as far-spreading. I think you have to take at least SOME of that for granted; it is built into the definition of Fantasy Race. What separates Dwarves from Crab-men is that Dwarves have empires, have spread, whereas Crab-men...haven't. You could have a race of Mermen, if you wanted, & that would be meaningful (see the above Atlanteans!) but you can say for instance that in an earlier, younger epoch the Elves spread but now dwindle. Maybe the word "Metropolitan" is better than "Colonial" or actually...actually I might be coming around on "Colonial." I mean-- it sort of taps the actual colonial nature of lots of DnD, which uncomfortably mimics European clashes with indigenous peoples, with the white people cast as Humans, Dwarves, Elves, et al & the brown people cast as Orcs, Goblins, Gnolls, et al. Funny how that works, huh?

To crack the veil, to let you peak behind the curtain, I'm curious about it because, well-- in my role-playing campaign of Oubliette, the Panhuman races are based on real world hominids. That is, besides "Humans" there are "Karnaks," who are Homo neanderthalis, "Demi," who are Homo floresiensis ("hobbits"), & "Alphas," who are Homo superior (Genetically engineered future people). Now, the only one of those that really has a shared cultural mythology is the Neanderthal, which people tend to think of as stupid cavemen. Well, no thank you, sir! My anthropology background prevents me from buying that particular cultural fable. Neanderthals had bigger brains than Sapiens, you know? & while within a species, size isn't everything, between species it is a useful rubric. Odds are they were at least as smart as people. My personal interpretation-- through the lens of role-playing, mind you-- is that they were more generalized than Sapiens. This is partially based on the controversial & debatable theory that Neanderthals lack of sexual division of labor is what did them in-- women dying in hunts while Sapiens were split up so that men hunted, & women gathered. Now, I'm not even trying to address that so much as let it inspire me-- see, if Neanderthals are more generalized than Sapiens, you are able to balance out their attributes, keep them even keel on a game-level.

Which brings me full circle back to "three word summaries." See-- I'd like it if eventually my players did develop heuristics for the panhuman species in my game. If you saw a city made of trees woven together by guiding their growth for hundreds of years in a Dungeons & Dragons game, you would have no problem assuming that the handiwork of elves was afoot. Now I've gotten my players to the point where if they came upon a city of living crystal with gold runes embossed everywhere, they will figure that the Karnak are up to something. I just want to be careful not to mix up culture & biology-- that is, to make sure there is a diversity in my portrayal of Karnaks that mirrors the diversity in Humans. At the same time, I want there to be something fundamental that sets the two apart. I want Human & Karnak to have distinct flavors. Partially I can do this by drawing from different wells-- history for Humans, science fiction for Karnaks. You know, there is a strong influence of Donner's Krypton in their architecture, & Alex Raymond's Flash Gordon in their fashions. Which is fine in a nuts & bolts way, but I also want more overt traits, things I can share with the players as useful principals.
Collapse