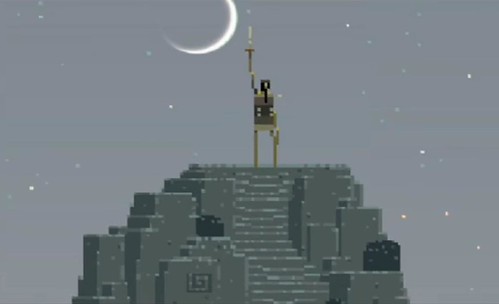 (From "Swords & Sworcery" by the Superbrothers.)

My most recent post about genre at Kit Marlowe & Co. will be my last!

fordmadoxfraud has put an end to my blogging days with his cruel budget! The iron gauntlet of payroll! That was the sad news at last night's Television Bonanza. David &

elladorian were a wee bit late, but still there before Jenny, who had a late night at the office. The only sad thing about David & Maggles being "late" is that I didn't get to cram as much Avatar: The Last Airbender down their throat as I'd planned. James & Emily were there so we watched the first episode, since last week they only saw the second episode. Anyhow-- the first two episodes are cute, but I think the third episode is when the show really starts, since you are free of the chains of the premise, you know what I mean? Anyhow, it was the second piece of bad news from David, since the last time we hung out he told me Maggie couldn't play in my Oubliette game, leaving that game somewhat adrift! Anyhow, eventually Jenny came home (hello!) & blamed me for picking out an ugly duvet cover-- then we watched America's Next Top Model, which-- everyone suuuure did hate Ren a lot! & we closed it out with Modern Family, which was a cute little episode.

So since I've been thinking about the game, & about rule tweaks, & the Denisova hominin, coupled with the rules for Nature in the Mouse Guard Role-playing Game have got me thinking. Now, "Nature" doesn't mean flora & fauna in this context; it means innate character, essence. In Mouse Guard you have a Nature of "Mouse," so whenever you do something "Mouse-y" you can roll the extra dice. It is actually a little more complicated than that, but there you go. Now, I'm a little enchanted by the idea of Nature, because, well-- frankly, I think it is a good way to mimic race in something like a Lord of the Rings roleplaying game. I mean-- Dungeons & Dragons' elves have gone through a little of weird tweaks over the years-- invulnerability to ghouls, not sleeping, having trackless steps-- all because of something appearing in Tolkien. Now, capturing all those little moments doesn't result in the full picture, because frankly, "elf" is a vaugely ambiguous thing that needs dramatically important results. Mechanically, giving elves a +2 to Charisma & Dexterity just doesn't cut it-- how does having a +2 to Charisma help you scare off the Black Riders, Glorfindel? Ah-- but if you have "Nature: Elf," suddenly it starts coming together. Legolas & Galadriel have the same thing going on...she just has way more of it.

So to recap; I like the idea for "Nature" because it lets you take something nebulous-- what is "Dwarfish" or "Elfy"?-- & make it just as slippery & broad as you like. Plus, couple it with a bit of positive reinforcement for negative consequences, & you are set. What I mean is, lets say you are a "Dwarf." If you are on an adventure in a dungeon & the Narrator says to the party "the claustrophobia is getting to you; the tunnels seems haunted & your paranoia is starting to make you hallucinate!" & you decide to use the bonus from your Nature-- "I am a Dwarf, I live underground, so I'll roll my Dwarf Nature to resist!" Okay! Makes sense! Maybe that depletes a pool, though, which you recharge similar to how Virtue & Vice recharge Willpower in World of Darkness. "Oh, I know that clearly we shouldn't steal the dragon's gold! I am a Dwarf however, so I will have to if I succeed on my Nature roll..." would grant you a point rather than cost one. Something like that. & it could be rated-- you could be anything from like I said, Legolas, who is Elvish, sure, but isn't anything like Galadriel. & heck, if you got bit & turned into a Vampire, you can use all the same stats...just change Nature to "Vampire!"

Anyhow, it made me wonder; how to you sum up "Human" in a short, pithy fashion? I mean-- you could say a Dwarf is "Stalwart, Greedy, Cunning" & be done with it, or an Elf is "Graceful, Magical, Sad" or a Goblin is "Cruel, Genius, Self-Destructive" or whatever. My question though, is how you explain a Human. I mean-- this is part of the root of Fantasy, right? If Elves & Dwarves & Demihumans & such are all exaggerated Humans, as far as myth goes; well both how do you make the non-humans "alien" without making them unplayable? & more importantly, how do you set Humans aside? You could say that a given Human is greedy just as a given Dwarf can be charitable, or that a Dwarf's Greed is like a human gets hungry-- just a fact of life. My question though-- what is "Human." Science-Fiction would make me think that "Adaptable" is one of the words. The D&D designers said that they think one of the keywords for Humans is "Corruptible"-- which explains things like Vampires or Tieflings. How do you set Humans apart from other fictional races? What are the peaks that define a human experience, apart from a humanoid experience?

Open to: All, detailed results viewable to: All. Participants: 13

What three words would you use to describe "humans?"