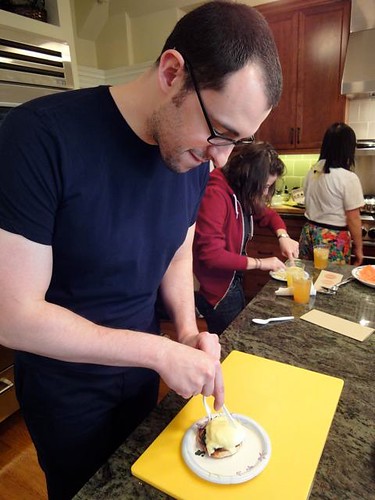 (Nino took this picture of me at the Oakridge Kitchen brunch class.)

IN THE CONTINUING SAGA in which bicyclists are animals, barely fit for human consumption-- a biker hit me today! Not hard, & it didn't even have to be a thing, but it was! Objectively, I was being a cheater-- I was crossing the street, at the intersection, but against the light. The traffic was non-existent, so I jay walked. So I'm not crystal pure here! The biker on the other hand is cast in wickedness! He had the vices of the worst kind of bicyclist; he acted as a pedestrian when it suited him & as a vehicle when it suited him! Not to mention he was in the wrong many times over-- down the sidewalk, into the street blocking turning traffic, then pulled up into the crosswalk, out into the street, forcing traffic over & again blocking turning traffic! That was all noticed before there was shouting, collision, yelling. I shook my head-- citizen failing! Then yes-- I jay walked, & he hit me! I should note, he was turning the wrong way on a one way street! So he hit me, & hey-- you know how when you bump somebody hard on the train or in line, you say "sorry?" & how maybe if you hit someone firmly with a chunk of metal you might say "sorry?" How "sorry" is a quick word of apology that balms social hurts? Yeah, he just stared at me. So then I said "watch where you are going!"-- a rapier wit, that Mordicai. To which he replied "I'm riding my bike!" What a retort-- matched only by my "I am walking & you hit me!" Which is when he denied hitting me! "I didn't hit you!" You certainly did, moron! So I yelled at him a little! Then came to work. A little adrenaline to start the day! A good yelling to clear the system. Jerk!

Sun's day was a lot of fun! Jenny wasn't having any of me-- she was fed up after hanging out with me all day Saturn's day. I went to the gym, & watched the season finale of Solitary 4.0. I was sad when Pod 6 went home, but not surprised that Pod 2 crapped out so soon-- he was effing incredible at those squats, but they had to have punished his legs past the point of no return. Good for Pod 3. Then we went to Kira & Nino's apartment to have corned beef & cabbage with them & Robert & Judy. There was a lively discussion about genetically modified crops. That was a nice evening! Then we got home, each had a glass of wine, & watched The Guild, that Felicia Day creation/vehicle. I wasn't impressed, but that's okay. I still like Felicia Day. Uh, lets see, then yesterday I didn't do much at all! Had lunch with Marie, that is always nice. Then in the evening Jenny & I watched Daniel Tosh's comedy special. He's funny when he isn't trying to "shock" you. Offensive humor just...isn't funny, most of the time?

At Kit Marlowe & Co., I have not yet begun to talk about genre!
Collapse