I've had a pretty busy week & I've been pretty lazy about keeping up with the keeping up. So I guess I ought to back up a bit; maybe I'll go in reverse chronological order? Starting with this morning-- uh, I haven't done anything this morning besides make espresso. Our eventual plan is to poach some eggs & have them over spinach & English muffins. Other then that, I'm going to go to the gym, & we are meeting up with the Tribe for an Irish repast of corned beef & cabbage. So I guess I'm going to skip today, since that is the future, & the linear nature of time makes the illusion of causality plausible. Oh, wait, we are cooking the eggs now!

Yesterday started out with a fussy Jenny & a hungry Mordicai-- we had to negotiate some kind of food choices, which was perilous business. While Jenny worked on her Hieronymus Bosch puzzle, I went & got us cereal & fruit. Eventually that segued into a nice afternoon out & about; we walked to the Community Bookstore so Jenny could pick up some of her special orders. Me, I put in my special orders with Kit Marlowe & Co-- & speaking of Kit Marlowe & Co., at the blog I ranted about how I hate your childhood. Anyhow, supporting the local bookstore is a noble effort; I figure you've got an ethical imperative to do so. We browsed there & I was almost seduced by a photo book of the Shackleton expedition, but considering I already have a similar book, I fought it off. Same photos! Same history! Relax, Mordicai. From there we walked to Sotto Vocce for brunch-- I didn't know they were the same ownership as Aperitivo. I really prefer the latter, but a few mimosas & some eggs salmone hit the spot. There was a lady wrestling with a cake for a baby shower, keystone cops style, that was cracking Jenny up. There was a girl behind Jenny that I thought might be pretty? I wanted to judge her with Jenny-- her friends were really awful, though. Then from there over to Grab to pick up some aromatic bitters (but not Angostura!) & then to Union Market to pick up some groceries.

We watched The Princess & The Frog yesterday. I quite liked it, & I'll tell you what; between my propensity for villainy & my friendship with

twirlynoodle (who worked on him), Doctor Facilier was the stand out. I liked the spooking up of the hoodoo man, I was down with his Petro contrasted by the swamp mambo's Rada. I thought the shadows the Shadow Man summoned were a little bit homage, too-- one looked very "Night On Bald Mountain" Chernobog, another looked Jackish, another Malificent as Dragon. It could just be wishful thinking. Still, a fun & not offensive film. I liked it. We also watched a National Geographic show called Sizing Up Sperm. The basic premise is pretty simple; applying the trials & travails of human reproduction to human scale. So the vagina is a ridiculous mountain range, the mucous cap of the cervix is a mile high ladder, & so forth. One of the sperm-humans reminded me of

handstil & so we were rooting for her! Creepy, huh? Anyhow, we finished up the evening with a little Current TV; infoMania & The Rotten Tomatoes Show.

What else, lets see. Oh, well, on Freyja's day I took off work? I didn't get much accomplished besides going to the gym, though. Still, nice work out. I was over due; I'd slacked all week. Then I met up with

fordmadoxfraud for lunch at Corner Burger. We got poutine-- hey guess what. Poutine is gravy fries with cheese. Same thing. Just a fancy word for it. Good-- the same way that if you took the equation fried + cheese + gravy it would always end = tasty. Leaving, David & I went to Union Market to shop for snacks-- I was really into it? My yuppie brain architecture was in full effect. Lets look at many cheeses! Then over to David &

elladorian's apartment to pre-game hang out. In sad-bad news, Maggie dropped out of my nascent Oubliette game, which is frowntown! Oh well. We stuck around watching I Love the 90s & such. Then the other players started trickling in for David's DnD game.

On Odin's day there was Television Night! Which Maggie & David were late for, & Lilly was on time for! Lilly & I walked around for a little while, buying wine & stopping by the bicycle repair shop & getting Jenny a chicken pot pie & then buying ourselves Chinese food from a buffet. Then! David & Maggie still weren't here, so there was only one choice: Avatar: The Last Airbender! We showed Lilly the first episode, then David & Maggie were there in time to watch the second one, the "to be continued!" part. I think we hooked Maggie! & Lilly said this time last year, right before Spring Break, I had hooked her on Twin Peaks. Good! I have excellent taste. We really only had time to drink some wine & watch America's Next Top Model after that. So, Naduah is a crazy lady-- she got kicked off. Ren is a spoiled brat; she's super loathsome. Lilly only wants to call her "Hipster Porn," which is fair. So I guess Raina is my pick, though Brenda looked great in the nude shoot, though her hair may deserve the credit... 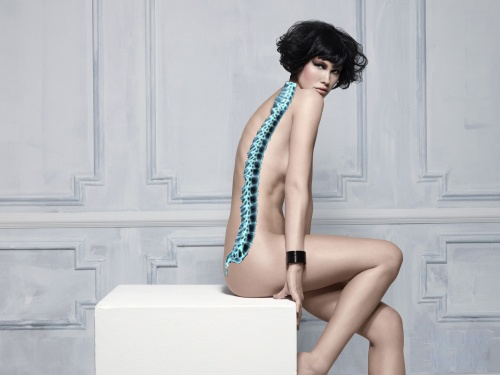