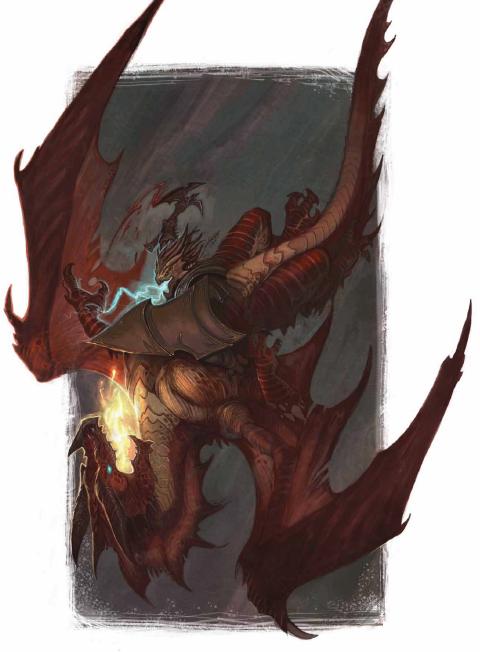 I was leveling up my goblin wizard to second level for

fordmadoxfraud's game when I came across a neat utility power that spun me off into thinking about Dungeons & Dragons Fifth Edition. I'm sure it is a long way away, but I think about it sometimes-- think about what I like from 4e, what I miss from 3e, & what I wish I could see, but haven't. On the small scale-- the power that started this all is "Mystical Debris," a 2nd level At-Will Utility Power that lets you create "difficult terrain" as a minor action. Nothing broken, it has a cap of your Intelligence modifier, but it is both useful & evocative. I knew I had to have it & then I found out that I wasn't the only one. Just a tiny little tweak! Everybody should have an At-Will Utility.

It brings me back to what I think is the worst thing about 4e-- the lack of "out of combat" powers-- or heck, powers that don't deal damage! I miss things like Charm Person. Just nudges for your character to be able to do outside of a fight. Weird monkey wrenches to throw in the story. Rituals help somewhat, but they aren't all the way there. I reiterate my point that this particular problem could be fixed with one book: call it The Book of Utility Powers if you will. Fill it with Utilities that aren't pseudocombat, as so many of them are. Heck, provide feats like the Multi-class feats that let you substitute Encounter & Daily powers for Utility powers of their same level. Suddenly, boom! My major complaint is gone.

Another thing that bugs me is Magic Items. I'm down with some of the changes-- they have been streamlined quite a bit. I think the 5e fix for them is simply to let them level with the owner. Don't make a player chuck away his +1 sword; let him keep it & make it better as he gets better. This wouldn't be hard, & I don't see why it isn't already standard. I guess my other beef with Magic Items is the weird ad hoc "how many Daily powers from Items?" limit. I can understand the point of it, but it is so...inelegant.

I'm fine with the blurring of the line between Spell & Power. I like that everybody has At-Wills & Dailies. The problem I have with it is the lack of a line between "Supernatural" & "Exceptional." For instance-- the Rogue. When the Rogue "turns invisible," as per some of the higher level powers...I want it to be clear that it is non-magical. An egg filled with powder creates a smoke bomb, or you hide in the cross-beams or...whatever! I want it to be non-magical invisibility. The "Power Sources" sort of go in this direction, but I'd like there to be some clear line. Heck, for guys like Paladins, you could mix it up. & for even spell casters you could add the keyword "Covert," to show if you can cast it without shouting magical gibberish & waving your wand.

The restrictions of feats, Paragon Classes & Epic Destinies really bug me-- heck, even some Magic Items are race restricted now! The vast majority of feats look good-- you might even want to take it!-- only to be stricken from your character options because you aren't an elf. Or the right kind of elf. This is frankly, dumb. Now, I know that 4e decided they wanted your character's race to be more important. They wanted a dwarf wizard to feel different than an elf wizard. That is all well & good, but I think exclusion is the wrong tactic to take here. If you want to make "elf-ish" feats, fine-- but what you should do, maybe, is give characters free racial feats. Everybody gets a feat every other level, & anybody can take, I dunno, "Resilience," but in the OTHER every other level, you get a "racial feat," so a Dwarf can take Resilience then-- but not, uh, "Soft Steps" (but an elf could!). I'm saying, in essence: if you want to represent the "Yes, but..." school of Dungeon Mastering, you should carry it over into game design.

All this talking about gaming is reminding me of my post at Kit Marlowe & Co. about comic book shops & how I used to get all of my RPG books there.

Saturn's day was insane, so I went a little mad too; don't mind if I do! I described the weather as "Cloverfield weather," & it sort of was. Not quite Statue of Liberty head-ripping, but gusts of wind & gouts of rain-- sideways rain. I had a yen to go to the gym, but I wasn't venturing out in that mess. Instead I finished my book & played some video games. I was a little stir crazy, as I mentioned, & stared at the internet without getting anything much accomplished. Eventually Jenny came home & when I noticed it had stopped raining for a moment, she helpfully goaded me into going to the gym. I felt fairly accomplished! That night though, we watched the pilot of Parenthood. Oh god, that show is awful. I mean-- I like Lauren Graham from Gilmore Girls & Peter Krause because of Sports Night but heavens to betsy did I hate that show. Basically just forty minutes of terrible things happening to despicable people with ten minutes at the end where they hug it out & make the world safe for white hetero-normative people. Just rubbish, & Jenny made us finish it!

Sun's day Jenny kept saying I was super in love with her; whatever! We lounged around the apartment. Watched Saturday Night Live, which I thought was pretty funny, even if the sketch about home security had already been done better by Sarah Haskins. I know we must have watched other things, though we didn't spend the day huddled around the television. There was Human Target again, with all of its very 80s flavor, & oh we did catch up on the last two episodes of How I Met Your Mother which I thought were quite good & much better than the last few before them. I went to the gym again, at some point, & oh! We polished off some of the burritos we'd had left over from the night before-- burrito night! Then there was an episode of Solitary 4.0 in there, too.

The real cap on the evening was dinner at Al Di La with Kira & Nino. The wife & I got there early, & the tribe was running late, so we went to the wine bar around the corner-- oh, pardon me Al Di La Vino (compare to "Al Di La Trattoria"). Jenny's wine was better than mine, though I didn't note what mine was (Gra...maccia?) or what hers was (the special). Kira & Nino showed up & we were seated back at the restaurant. I had the lamb chops (again, the special) which was ace, as was Kira's malfatti (swiss chard & ricotta gnocci). Not that Jenny's lamb ragout wasn't good (it was everyone else's favorite) or that Nino's hanger steak wasn't tasty (it was just hanger steak, though). The appetizers were actually the best part of the meal, if you ask me: some kind of white salad made of the insides of various vegetables, & Swiss chard with anchovies (Swiss chard, you are breaking my heart!) & also octopus & chickpeas. We all sat around talking about "grown-up stuff" then tra la la, time to tuck Jenny's into bed.
Collapse