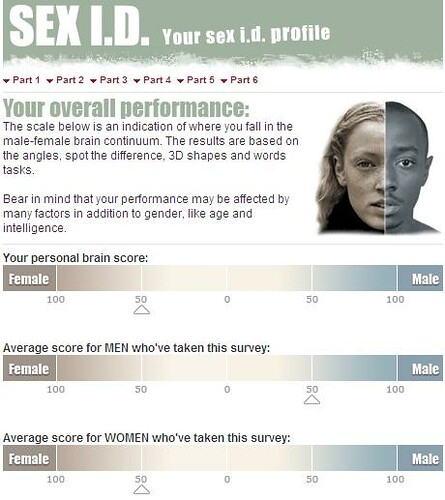 I took a test on the internet that says I've got a lady brain! Which I think is funny. I tend to think I'm fairly masculine? Not in the way that like, Commedy Central or whatever says is masculine; not in like beers & NASCAR or...or whatever. I'm not sure what is "manly" in the mainstream any more-- which is funny, since I'm a huge yuppie. I just-- well first let me say that the BBC test is more about "mental strengths" or whatever, & has more to do with "are you good at spacial stuff?" than it does with gender roles. So I guess-- I mean, I'm good at reading people's moods based on their eyes? Because I'm good at manipulating people? Okay! I am also pretty big, & sort of aggressive? Oh, that isn't built into the test. Anyhow, my hunter-gatherer role is hunter-shaman. I will kill a thing, I don't even care. Whatever, internet! I guess this test is what prompted me to write at Kit Marlowe & Co. about becoming a feminist?

Went to the gym first thing when I got home yesterday & ugh, I was exhausted & weak! Seriously, usually doing the elliptical on 15 or 16 is my "cool down" but I was panting & puffing yesterday! I did do a bunch of curls with the bent bar; I didn't break my elbows, which I am never sure-- which is the "right" way to do it? Anyhow, my wrist finally stopped hurting, so I also worked on my forearms a bit. Came home, showered, & went out to pick up Fatoosh for a late dinner. Then, on to My Neighbor Totoro, which I've never seen. It is part of our Avatar: The Last Airbender come down. We may not have any Appa left, but we did get to see Nekobusu, who is an inspiration for Appa. Jenny really liked the movie; she kept giggling! I liked it too. The kids, especially Mei, are really believable children, which is hard to do. I mean, unless you are a genius like Miyazaki. There is a bunch of Miyzaki I have meant to see but haven't yet, like Howl's Moving Castle, so we'll be getting more of his movies soon. 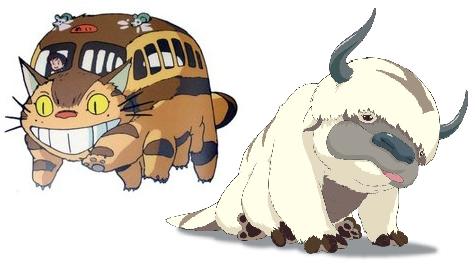