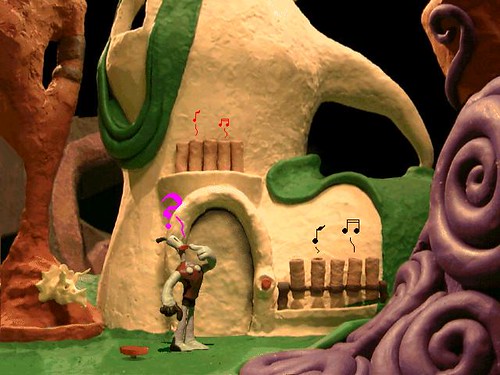 Today is a day of being like, a sixteen year old! Eff the suits! I just had some train commute run-ins with some jerks; a guy on the stairs dawdling, taking his time, blocking choke points, just basically being rude in the way that selfish people who are unaware of their surrounding are. It wasn't just bad manners, bad civics, but it was bad kung-fu. Then there was Mister Elbows who was all leaning into me on the N train, too busy crowding others while checking his iPhone or Blackberry or JerkBox. Between those guys it looked a little grim, but then I hit the office & handed out some scones I made (cheese & scallion, chocolate & blueberry) & popped in the Neverhood soundtrack that

toughlad scored me, so things are going a heck of a lot better, so far. I've also got a post at Kit Marlowe & Co. about reading habits that I urge you to participate in.

Did I mention making scones? On Sun's day I was last-minute convinced to go with Jenny & Meryl to the Oakridge Kitchen brunch class. It wasn't that I didn't want to before, I just hadn't even considered going with them! I was going to go to the gym, but I guess in the end I managed to do exactly the opposite. I sure ate a lot of eggs-- probably half a dozen? There were lots of hard Meyer's Lemon lemonade; half with gin, half with bourbon. The former was definitely more to my liking. First up was the watermelon radish salad. Watermelon radish?! It looks like a watermelon but tastes super sour. Awesome with some arugula & a basil dressing. Then we learned hollandaise sauce (tricky!) & how to poach an egg; I think the poaching an egg lesson is the one that will be the most use to me. I could integrate that into my life! I threw them on a toasted muffin with some smoked salmon, spinach, & the aforementioned hollandaise . Then it was scone baking! The biscuit method is how you make those guys. I sort of got a little over anxious & mixed stuff prematurely in the savory batch, but it came out swimmingly. The last bit was french rolling an omelette. I think I learned here, too; hot skills are tricky though! Mine ended up being spinach, fontina cheese, & roasted onions, & was pretty awesome; I also ate half of the sample Chef Robert made with spinach & mushrooms. Thus glutted, I didn't eat the whole rest of the day. Also I drank so much coffee (I guess?) that I didn't get to sleep till after midnight.

After brunch we walked Meryl to the train & went home to soak in our exhaustion. So sleepy! Instead we vegged out & watched some Saturday Night Life. I remain unable to see why anyone think Zach Galifianakis is funny. He...seems really unfunny to me, just flat & full of 90s irony. Then Jenny & I rolled out in search of the good times! We walked to the movie theater to see Alice in Wonderland in 3d. It was sold out for the time slot we had prepared for, but we bought tickets for a later show & went to the Clover Club to chill. Or well, chill is the wrong word, because my face basically melted off. They seated us right by the fire, which sure, might be nice if it wasn't 15.5 degrees outside. In Celsius. Between that, & the walking, & the sleepy, I was a bit fussy; luckily, there was a martini there. Then finally Jenny & I went back & it was time! Time...except I missed the Adventure Time preview while I was in the bathroom. When I came back the pre-trailer commercials were wrapping up & were like "you watched blah blah blah & the Adventure Time preview!" & I was like "Fuuuuck!" & Jenny was like "don't swear, there are kids here!" & the kids next to us were like "yeah man, you missed it & it was awesome!" Those kids are basically my peer group. Life got significantly better, however, when the Karate Kid trailer came on. It looks...kind of awesome? Then there the new Tron: Legacy trailer, which was chill inducing. Jenny doesn't care about Tron but I can't help it. Those "dark Disney" projects, like Tron & The Black Hole are just so sweet. As for the Alice in Wonderland movie itself, my impression from the reviews is the same opinion I left with. The film is sort of blah, but Alice herself is sort of awesome. Having a decent protagonist goes a long way towards making something watchable. My two favorite things were: one, Anne Hathaway's White Queen. She spoofed the "Disney princess" role just the right amount; I cracked up all the time she was on screen, in a good way. The other thing was that the red & white castles looked like version of the Disney Sleeping Beauty castle. Just a minor touch that really resonated with Disney's attempt to make their brand mythic. Worst: no snicker-snack?

Saturn's day was the epic finale of Avatar: the Last Airbender. Jenny & I spent a little while basking in the afterglow, listing television shows that really count as "Art" & make life, as Jenny put it, "worth living." Avatar: The Last Airbender, Battlestar Galactica, Gilmore Girls, Buffy the Vampire Slayer...yeah. I guess we are geeks. The last "episode" of Avatar was actually a four parter, & it paid off. It didn't blow my mind, but then, how could it? The show had consistently fulfilled & raised my expectations to the point where nothing could surprise me. I predicted Avatar Aang's solution to his spiritual dilemma. I am really bothered by Sokka's loss-- losses even. Azula's final freakout was really well acted; fearsome screams, fearful sobs, all that. I was wrong though on one major count; I thought it would end with a "40 years later..." wrap up, Aang dead, & Katara or Sokka the parent of the new Water Tribe Avatar. Anyhow, now Avatar is done. At least until the complete set comes out & then drops in price enough for us to buy it & rewatch it. The great thing about Avatar being all-ages is that we can definitely re-watch it with our kid, whenever that happens. Gross, right? & awesome.
Collapse