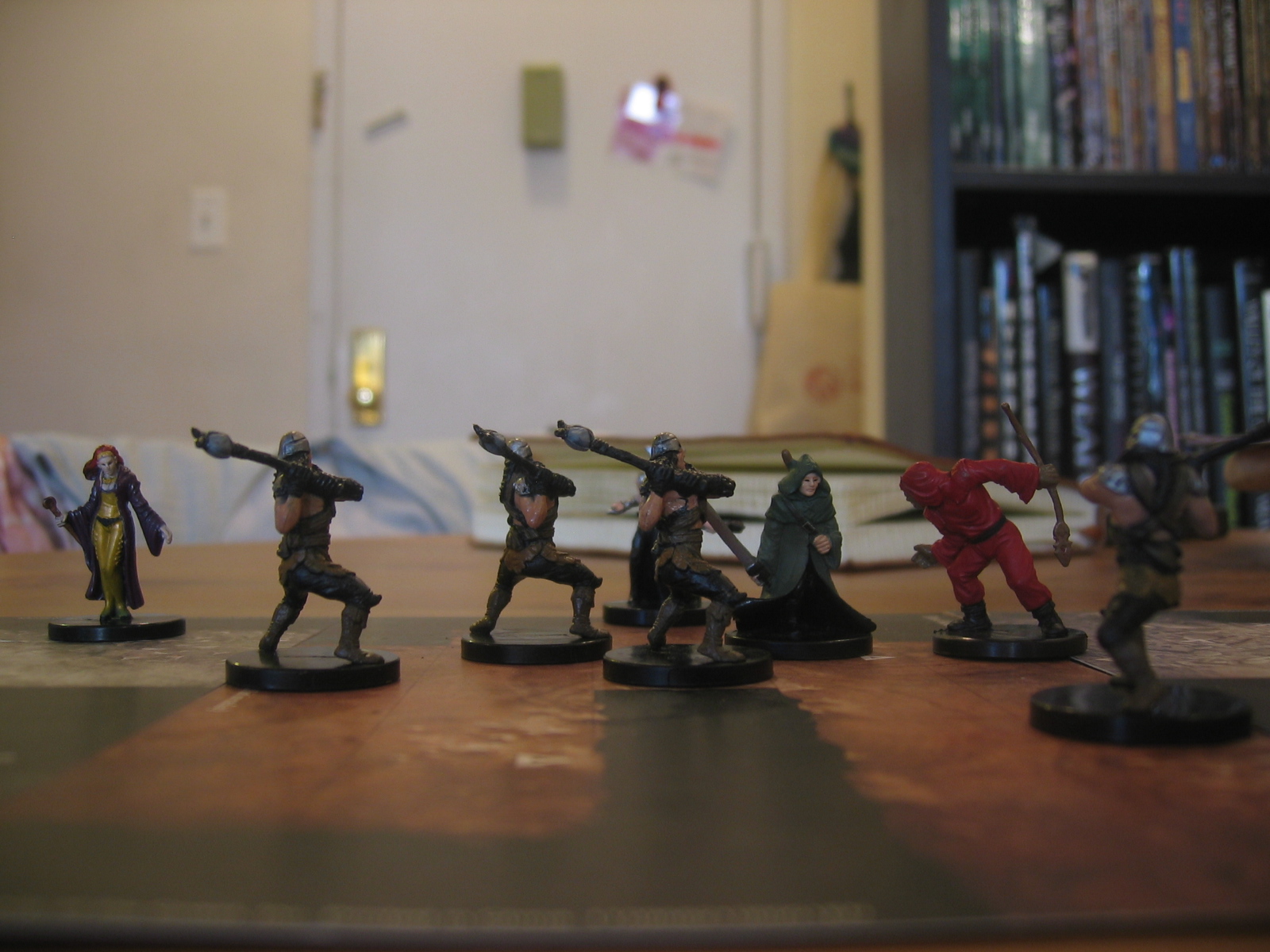 Last Oubliette game was cancelled at the last minute, as part of the ongoing scheduling troubles we've had plaguing us for...oh, the last six months. In recognition of that, I threw out the idea of trying on some different timeslots for size, & this was the first attempt, which I'm going to call a success. I prefer, personally-- as just one member of the group-- a sort of eight hour all day Sun's day game smorgasbord, on a weekly schedule, with two games running on alternating weeks. That was the "classic" Gotham schedule, derived between

martak's game(s), then Scott's game, then finally my own game. That said, it wasn't really coming together like that for this group, & it is long past time I stopped trying to make the square peg fit the round hole. Tom, Tracey, Sam & James are a different animal than Mike, Gerd, Bernie & James. This session was from six thirty (6:30 PM) till about ten thirty (10:30) & I think it clicked. The tighter time table kept things moving, & when I went aside to do one on ones, the other players stayed in character, nobody's interest wandered or ended up too frustrated. I think the time slot, while not ideal to me, is probably really good for the group. We showed up, I set up, we made Sam a ton of coffee & then we dove right in.

Last session had concluded with a social call from the Baronessa Octavia. This session picked up immediately afterward, in the night while the party slumbered (or, in Balthazar's case, soaked-- as he sleeps very little, though the party has convinced him to act like a person occasionally, for old time's sake). Damocles awoke first-- sleeping by himself, as we determined the amorous attentions of the Baronessa had bent Lorelai's affection to her-- feeling the crystal key to the massive Dragonfly Theme, the megastructure they live in, hot against his skin. He smells smoke in the air! Balthazar wakes up too, or at least, opens his eyes. His flowers are wilting, his milk is spoiling. Still on the edge of dreams, he speaks into the mind of Damocles, telling him the smoke is no fire, but rather a smoke bomb, a distraction, a concealer! Bedwin Hermóðr comes out of his sleep, sprawled across an open tome in his minaret atop the Theme; he exits & begins moving across the roof (spotting the ghoul Gaspar's striped horse grazing). Lorelai awoke to find...the door to the vast orrery Bulb where she sleeps clicking shut? She wakes Octavia only to...be covered in a puff of red dust! It begins to draw her down towards some cryptogogic world, & she shakes her trident at the heavens...which open up into rain.

Out in the hall, violence has erupted! Figures naked except stiffened leather over their vitals attack with swords (ring-hilted, swung to be held both pointed up & down) & with thrown darts, their faces covered in scars. Also to a masked figure, the white porcelin tusked & leering, who fought with whirling hooked swords. They fought fairly adeptly, alternatively defensive & offensive, but the players fought better. Damocles was disarmed once, but regained his sword; he was cut badly-- & then the scarred face enemy attacking him cut his own thumb to the bone, bleeding into Damocles' wound. His feet were stabbed, too. Balthazar involved himself in gunplay, as did Bedwin, each getting a few sharpened triangles thrown into them. Balthazar pulled them out of his flesh & threw them back! Meanwhile, Lorelai came too in a drugged haze. She wandered the secret passages of the theme, beckoning the Baronessa & eventually picking her up, tossing her naked over her shoulder. Lorelai experienced the world synesthesiacaly, hearing honeysuckle & feeling cool stones; the drugs were quick! Outside, Damocles & Balthazar & Bedwin fight on; when they kill the masked figure he bursts into buckets & buckets of blood-- an outrageous amount. All that remains are his pajama like clothes-- the mask, his swords, & his body are gone. Similarly, the scarred figures have an awful means of avoiding capture or identification. They have glass bulbs of acid, which they splash on their fallen comrades, or on themselves when they are at the point of death. One particularly gruesome sonofabitch just holds the glass bulb in his mouth until he bites down, melting his face, jaw, & even managing to swallow some, burning out his chest. 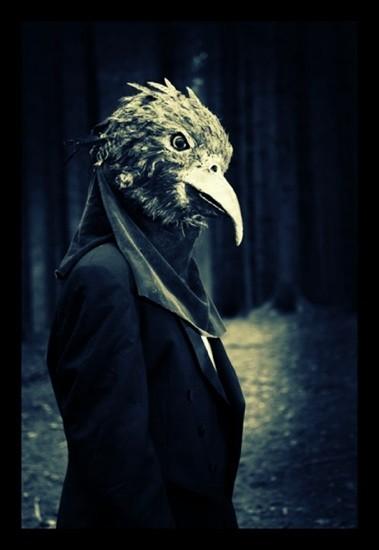 When the fighting was over, the enemy vanquished (with the assistance of Lupus & Mathio), the boys went looking for, & found, Lorelai. She was red-eyed, the white sclera dyed deep red by the drugs. She didn't seem perturbed; deeply confused & out of it, but not freaking out. Balthazar & Damocles each saw frog-like things with centipede-tentacles, clinging to her, & they remove them with Damocles' weapon the Sword Reborn. Lorelai climbs up to the roof, with a strength born of...well, deep wells or angel dust, you tell me. On the roof, Octavia (similarly dosed) soaks in the fountain while Lorelai makes a little chair out of twigs. "I'm a cuckoo!" she says. In her dream-- which the sorcerous Balthazar says is a shamanic vision-- she meets a gentleman with a bird's head. He says-- well, more importantly, Lorelai says he says-- they he is the son of the "Murdering Sorrows," or the "Mother of Murderers." She puts her feet in his lap & they talk a little-- he asks her if she remembers washing his mother's face & they talk a little about names & Naming. It has come up before, remember-- it was Lorelai that first Named Seraphina. When the sun rises, Lorelai is fine...but they have a guest, Mathio tells them. Xenobia is here! Damocles & Balthazar say "remember how she was on the arm of our enemy Adelard & then our enemy The Generalissimo? She is the architect of our misfortunes!" but Bedwin says he invited her here! He needs...something from here. They fight, they argue, but eventually-- a long time later after threats & cajooling & cooled tempers & wise council & insistence-- they decide to meet with her. & that is where we ended. She also, as a token of good will, gave them this booklet: 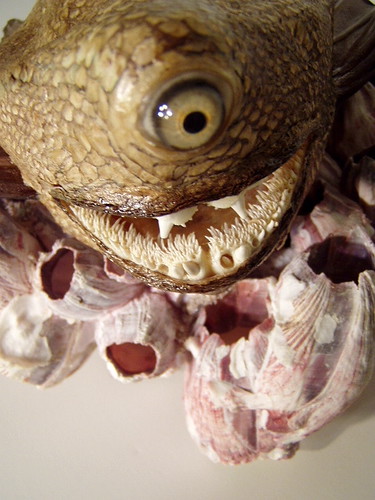 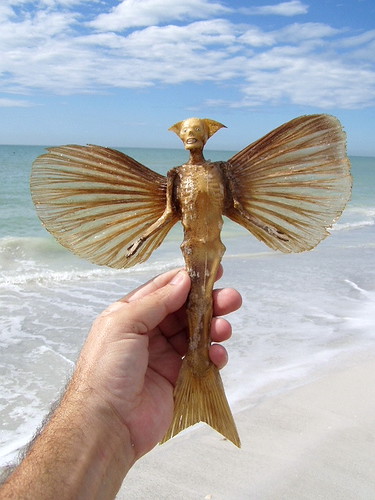 The forty-seconde Spirit of The Karnak is

He is a Duke Great and Strong, and appeareth like a mermaid. His office is to govern the Waters, and to guide Ships laden with Arms, Armor, and AMMUNITION, et cetra, there on. At the Request of the Exorcist he can cause the seas to be right stormy and to appear full of Ships. Also he maketh men to die in Three Days by Putrefying Wounds or Sores, and causing Worms to breed in them.

Observe the Moon's Age for when it is 14 days old and if the Green light showeth that is Best.
Collapse