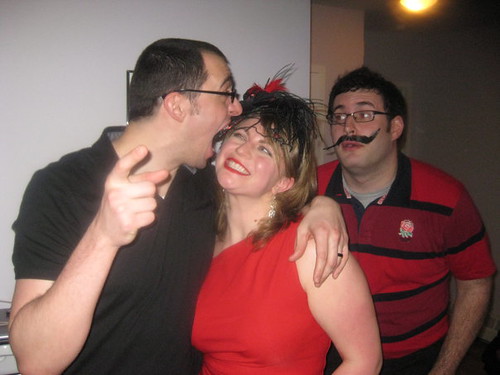 (Jocelyn took this photo of me, Meredith & Dan.)

Saturn's day night I decided to go to Amy & Omrey's Purim party. First, Jenny & I walked down Seventh Avenue in-between the snow hills on our way to American Apparel. She bought some shirts & tights & legginsg & leg warmers & hose & other leg coverings, I got a t-shirt. The mannequins at American Apparel really glory in the overly sexualized attitude of the chain; even the "just lower body" display had enough rump on it to be clearly bending over & presenting hindquarters for sexual access. Lordosis-- that mannequin is in heat! After that we got Rachel's for lunch, each of us choosing a different brand of enchilada. I like going on dates in the middle of the day with my wife.

Eventually I did manage to go to Amy & Omrey's Purim party, around eight. I picked up a bottle of wine on the way & managed to be one of the first people there. I'm punctual! Even my "fashionably late" is only like twenty minutes late. I decided to play it super fast & cheap. "What is your costume?" I just pose & sort of point to my face, & then "Oh...Mordicai. I get it." Laziest holiday ever, but then, if your name was Hollow Eve or something you would take advantage of it too! The party was fun; nice & low key, & we ended up spending a lot of time on ChatRoulette. The site was acting buggy, & we didn't even seen penis; there was a masturbator but all the business was off screen. I went down with Brian & Jocelyn while they had a cigarette & while I was outside I realized that it was time for me to go. Eleven o' clock, I have to escape before I turn into a pumpkin! Wait, Purim, not Halloween. Before I turn into a hamantash!

Sun's day I scraped together the wherewithall to go to the gym. I went on Freyja's day, but it was closed! I've been terrible about it since Avatar: the Last Airbender came into my life; why get off the couch if staying on the couch means another episode? I did go on Sun's day though & put in a nice chunk of time; this 1:45 thing is working out for me? Or is it? I just do lots of cardio, so it is all cheating. Then again, forty-five minutes of cardiovascular is good, & it still means I did an hour of other stuff. I just feel gross for not doing more frequently last week. & also because Sun's day night Jenny & I went to dinner with Kira, Nino, Judy & Robert. We drove down to a Chinese place in Bensonhurst called Bamboo Pavilion that serves Sichaun style, & also hot pot. I've never had hot pot, but uh, I still haven't, since no one wanted it. Instead we got a ridiculous spread of food, most of which was very spicy. Very hot whole fish (too many bones for me, too spicy), lamb & such (very, very spicy), hot tofu (ma pao?), chow fun pork (really good), green beans (yay), shredded octopus & pork liver in pea shoots (my favorite), another green of some kind, & tea smoked duck (the smokiest). The place is BYOB, so Nino & I went on a beer run to pick up some Negro Modello. The conversation mostly centered around weird ways that people kick the bucket, especially that show 1001 Ways to Die. 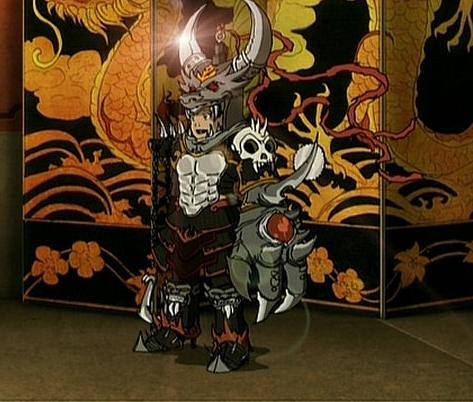 Mostly Avatar has eclipsed my life. My life, & Jenny's-- it isn't my obsession alone! We've been grabbing disks left & right, Netflixing, streaming, buying downloads, getting more by hook or by crook. I don't know how many hours we've watched but the answer is "a lot." We're midway into the Book of Fire, which is the final season. The show is mostly past the "bad things happening" part of the show, which is nice. Not that the tension wasn't good, but it was rough. Bad things happening to Appa make Jenny's eyes fill with tears! I have to say, if "Sokka's Master" blew my mind. Avatar: The Last Airbender is great at setting things up. The show will lay down foreshadowing a season in advance, then continue to remind you of the plot points existence subtly as time goes on. Then the episode before will hint at it & put the ducks in a row, then the "Previously on Avatar..." will show a clip to put it in your mind...then when it happens you will be too busy being caught up in the plot to dissect the narrative. You know? It isn't a crazy twist-- it is a logical following of A to Z but you are too busy watching the "B, C, D..." to let your mind wander ahead. The White Lotus Society strikes again! Anyhow, yeah, I'm kind of obsessed, & I keep having dreams about living in the Fire Nation.
Collapse