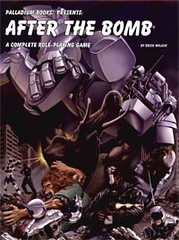 After the Bomb by Erick Wujcik.

Remember how I ordered the wrong After the Bomb? Well, I couldn't let that stand. I mean, it was eating me up, so in a fit of pique I asked

kromelizard (the Master of the Forums of the Megaverse) to direct me to the real, actual book. & thus, it was mine. First thing to note: YES. It does in fact have the exact same ISBN as the 1984 book After the Bomb, despite the fact that the two books are radically & fundamentally different. I can't help but think this is Palladium trying to save a buck by not paying for a new ISBN-- seriously, they cost like, what, $250? There must have been much more than that lost in sales over the confusion. It is a fully head-desk moment, but then doesn't Palladium books work on cut & pasting text between books by actually cutting the manuscripts with scissors & pasting them with tape & glue? So I guess I shouldn't be too shocked.

Buying & reading this book is fully an exercise in nostalgia. A few years ago I gathered together a crew of friends to play Teenage Mutant Ninja Turtles & Other Strangeness. I even drew up a master chart of randomness that drew from all the books I own. & yeah, making character was awesome. We had some great ideas out there. I led them through the "White Ronin" adventure, teaching them all to fear the phrase "you realize that you are well & truly trapped." All was going well! Until we needed to use the rules. Man, that system is crazy unplayable. I don't know, you get like 8 attacks a round? Some of them can be parries? Whatever, man. So it is with this book: the Bio-E character creation system is as it has always been; concise & fun, with a multitude of crazy & compelling options. This book adds the ability to take flaws like "vestigial horns" or "reptile brain: prey" to get more Bio-E, which is pretty neat. The rest of the Palladium rules system is recapitulated, & it is as cludgy as ever. I occasionally get the urge to combine the World of Darkness rules with TMNT, using the Changing Breeds book as a bridge; if I ever seriously wanted to mess with it, that is how I'd go.

The most interesting thing in this book is the introduction of "Pure Breeds" & "Chimera." These are somewhat stable strains of mutations, some of which are boring-- like Longhorns, who are all big & tough. Others though, are crazy, & the best kind of insane. Teleporting cats is one thing, but what really won me over a spider goats. Spider goats exist in the real world-- they are goats with arachnid DNA that make milk with spiderweb in it. In excellent TMNT logic, that means that they mutate to be goats with eight legs & Spider-Man powers. YES. Also the whole "lets make lab rats with ears growing on them, or that glow in the dark, or that are transparent" thing plays out in other odd critters. Or pig people! Pigs that were selected for being perfect organ donors for humans that mutate to be more human than human. Even an off-handed reference to the mutant three-eyed elephants of India. Fun, fun, fun! There is also new information on how Palladium sees "the Crash" as having happened-- stuff about homemade viruses or whatever-- which is fairly mediocre & not neccisary at all. The end of the world happene, nukes, bombs, radiation, whatever: it made mutants. You don't need to over-explain your premise.

I came from the Streels.
Mordicai walked out of them
& said "Well, I'm here."

I found Watership Down to be an amazing book. Tracey gave me a copy of Maia because she liked it & it influenced her character in my Oubliette game. I thought it was so-so, not terrible nor fantastic. I picked up Shardik hoping it was more of the former & less of the latter; I mean, I knew it was fantasy in the same setting as Maia but I also knew it focused on a bear cult, & I like bear cults. See, heck, two of my favorite books last year heavily involved bear cults! Unfortunately, Shardik wasn't all that I wished it would be-- it even inspired me to write a post at Kit Marlowe & Co. about when to quit reading a book. The book has its moments! I'll give it that. There are certain inventive moments, & certain descriptive flourishes (like when he describes a heart as a black cockroach on page 267) but over all...it was drudgery. The thing is, Shardik participates in a middle brow tradition-- that "Bad Thing" equate to important literature. Yawn. Even worse, to accomplish the mood of relentless trauma, Adams resorts to wild & random character swings. The protagonist switches from humble & pious to cruel & prideful just...all of a sudden. He jumps back & forth all over the emotional page, never really landing any portrayal believably. The bits when things aren't all just a barren hellish landscape I liked-- unfortunately, that is about 150 pages out of 600. I wish I had nicer things to say but the raw truth is: this book was good enough to get me to finish it-- but no better.
Collapse