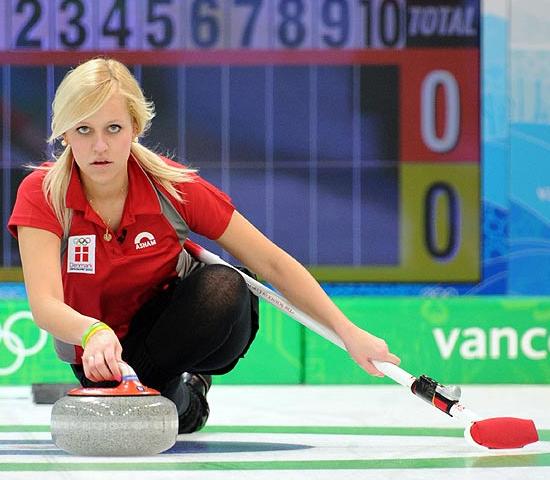 Did you hear about this Olympic drama? In a woman's curling match, the Canadian crowd of yokels jeered & shouted to distract the rival curling team-- which, nice & sportsmanlike, jerks. They even made the girl throwing the stones cry-- & that girl with my very own favorite from the games I watched, Madeleine Dupont. So sad! So apparently women's curling is the Olympic sport I care about this year. Who'd've thunk it? You know what else is odd? A little birdy came up to my ear & mentioned "hey, you know what? I've got naked pictures of that girl in the Olympics you like." What? I was shocked! "Are you a spambot?" I asked? No! Indeed this dirty bird had recognized her mascara'd stare from a Danish Charity Calendar in his possession. In Europe I guess being naked isn't a big deal. You might do it for charity. Like a bake sale. So. Olympic fever! I intend to go to the gym tonight, & apparently, according to my co-worker Tom, I'm supposed to root for the Russian hockey team to beat the Canadian hockey team. Now, the Canadian women's curling skip was polite & all, but I don't think I'll have any trouble rooting against the canucks.
Collapse