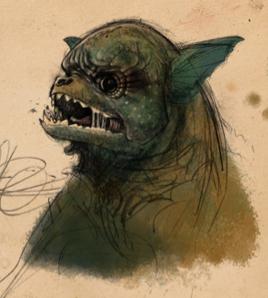 Last night was the second (or third, depending on your count) session of

elladorian's undead paladin exploding (telefrag!) into a giant minotaur-esque creature asking for our help. Well-- in short order we discovered that it was insubstantial, & prone to asking for our help without having anything actual to give us. What. The. Hell. Still, the others seemed inclined to help it-- almost suicidally inclined! My character Bogey was badly hurt-- eleven hit points, no healing surges remaining, daily used-- & the rest of the party was banged up as well, but no one would listen to me to rest. They wanted to follow "Bullface." We hiked for six hours, went through a haunted grove, & down a spooky well-- down which I fell & got knocked out. Then! An interjection. A vignette focused on

toughlad & Erica's drow twins, where the rest of us played drow family members. It was short & fun; I could learn a bit from that timing, since mine always spin out of control to become long drawn out microsessions.

Down the well, after I awoke (from Erica's warlord healing me-- I didn't surge but did get 1d6 hit points back-- 3!) we found...the minotaur-demon's skeleton, in a weird room like where we had entered the world of Orrery! It was a ghost! Stupid ghosts, why was everyone doing what it told them to? It did make Edbury's ranger's animal companion come back to life-- maybe the bargain I made, for it to resurrect me if I ever die, is real, too? Also in the weird metal bulbs-- the same sort of strange places that we've seen before, I'll reiterate-- we found Maggie's new character! A plant lady! A dryad of some kind. James was stuck in the other room getting beat up a little, but my plan of closing the door as soon as the tree lady ran in was smart. It worked! Except James was in the other room. For a bit. Climbing out of the well-- also knocked my character out. James' paladin Laid Hands on me, though. Five hitpoints! We regrouped eventually-- in time to fight a bunch of trees! Exiting the ruins with the well the trees of that haunted grove I mentioned attacked us. Including a giant sized one! I managed to avoid getting beat up, & also to kill a bunch of...what are those thornlings called? The ones from Sunless Citadel? Talk about a blast from the past! That was the first Third Edition game I played, remember that? Anyhow, then it was midnight, & time to go home for sure.

We used some of the DnD Dungeon Tile accessories that Maggie made for David for X-mas, & I have to say I am a little jealous of the cubes with the magnets. She took little 3/4" wooden blocks & glued magnets to each of the six sides; now they are great tools for making three dimension terrain. They all click together to make hills & such. I want them, or something like them-- I'm not that into tiles I've found (I traded David all my old ones for some choice minis), & prefer to draw on a dry erase mat. Still, the use of three dimensional elements is really cool; I'd like some kind of "tree" as well-- or tier, or...basically some way to elevate a platform. You can always just draw the same thing twice over, I guess. Anyhow, I need to prepare myself; I'm running my Oubliette campaign tomorrow for James, Tom, Tracey & Sam.
Collapse