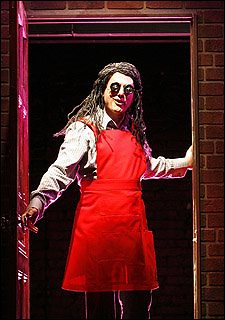 (David Greenspan in the Coraline Musical. Photo by Joan Marcus.)

Do you remember how much I liked the Coraline musical? I do! Especially since Ryan pointed out that the cast recording just came out! You know, the soundtrack, penned by Stephin Merritt? So! Yes, I downloaded it last night, after a little jiggering with Jenny's password. They wanted her password & I didn't know it-- I kept guessing! I know a bunch of them, I could have gotten it. Then they were asking me personal questions, like "what is Jenny's favorite number?" & I was like, "oh I'm good at this game!" & followed the breadcrumbs. The point is that I have it, & it is lovely. We listened to half of it before bed last night-- I was too tired to listen to more, from my epic gym session. Then we listened to "Falling, Falling" which is...like, the perfect avant interjection. So catchy & so disharmonic. So then I burned a disc to bring to work, so now I've got that in my ear-tubes. It makes the hair wriggle with math & waves!

I forget that I ought to mention my weird behavior! Dream behavior. Not last night but the night before I woke up in the middle of the night, moved the masks that we have set up by the windows, raised the blinds mid-way, then set the masks back up. Why? Here are the "logical" options: to see out, to see in; so someone else could see out, or see in; to let light come in through the eye holes of the masks. The rumor-- the secret Jenny told me-- is that "Twister" doesn't mean the same thing to everyone else. Is isn't a thought that gets wrapped up in the noodles & folds of your brains? Consuming you, knotted inside the gooey grey? You know, a Twister! No? I invented that? How about that. 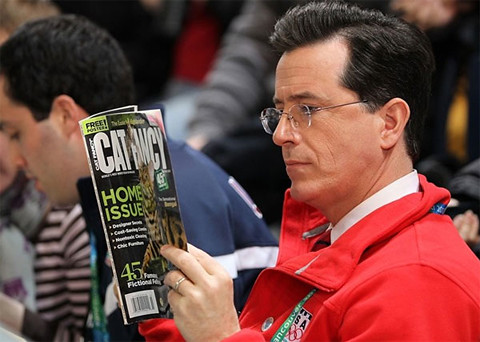 Everyone has no doubt seen this photograph of Stephen Colbert reading Cat Fancy at the Olympics, but it is pretty darn funny. I've said it before: caring about NASA & the US space program & also the Olympics? That is actual patriotic behavior. It cracks me up; like, I'm not gonzo for Colbert. I like him fine. He is a super patriotic satirist, though, & that is great. Conceptually I'm a big fan. Anyhow, like I said last night, Olympic Fever has finally touched me. So far the United States has been doing great; we're number one in medals, after all. They are all skiing & snowboarding-- & speed skating. See above re: Stephen Colbert on that subject. We're last in Men's curling & second to last in Women's curling. One of our biatheletes got ranked 9th in the 10km spring, but I don't have a lot of expectations for them going ahead. The Scandinavians are doing pretty well, & so are a couple other European & former Soviet bloc nations. Nobody I'm really rooting for though-- no spoilers or drama. No Zhang Juanjuan-like upsets. Anyhow, I think the only thing interesting happening today is Skeleton, which is only cool because of the name. Well & 'cause it is crazy.
Collapse