(Sherene wrote my name in Malayam.)

I just went outside to get a croissant & man did I get 23 skiddo'd! The weather isn't that cold, but the Flatiron Wind Corridor buffeted me like crazy! Okay let me divert my train of thought to an aside. Earlier today I was talking to Theresa about a potential-future visit, to which she'd also bring one of her kids. Last night Jenny & I had been talking about it & we were like-- "What the heck, what do you do with tourist kids?" So I asked Theresa & one of the things she mentioned was that her kids like bagels & pizza, to which I (half-)jokingly replied "how can they say that if they have never been to Gotham? Like-- they don't have bagels or pizza outside our boundaries!" & she called me a snob & I am, but I want to say for the record that anybody in Paris, or even France or other places with special bakery traditions, can lay a similar hex on me. I've never had a croissant! Or wait, I take it back; Tania made us croissants & she got a degree in baking from the French Culinary Institute. That has to count for something! Anyhow, I was just grabbing a snack-- I'm supposed to meet

familywolf at Manna for lunch.

Last night after work I met up with Jenny at The Chip Shop for dinner slash impromptu date. That place keeps shrinking & shrinking! Now it is down to, like, a single waiter! I got cod & chips & a side of mashed potatoes with pickled onions in it, thinking it would be like

fordmadoxfraud's colcannon, but while it was fine, it wasn't. Jenny had the mushroom macaroni & cheese; those mushrooms are so earthy! After that we came home & goofed around. Nothing much was going on; I looked at the internet & Jenny cleaned some grout! Then I played some New Super Mario Brothers, caught four Star Coins, & Jenny looked at the internet. Boring! So we decided to cuddle & watch Human Target, which yes, continues to be a huge total Eighties homage. Sure, crawl in the ventilation ducts! I'd say it was a stupid cliche if I wasn't convinced it was that way on purpose. It really is just like "Wasn't The A-Team sweet?"-the-show. Then we went to bed but rather then go to bed we just kept cracking each other up. Jenny said she was going to catch me with a glue trap, but I said I was a brave patrol mouse in the Mouse Guard & I'd cut myself free. & that if the Guard was around no mouse would need fear a trap or a cat! To which she insisted that she would get a snapping turtle, since I apparently think those are scary. Not so! Tokka is the best part of the second TMNT movie! Then I narrated what I thought the plot of "some Julia Stiles movie" (The Business of Strangers) which was a much darker & sexually charged version that I apparently scripted from only seeing the trailer once or twice. Anyhow eventually we did go to bed.

Speaking of giant centipedes, I wrote a blog post about giant over-sized tomes. 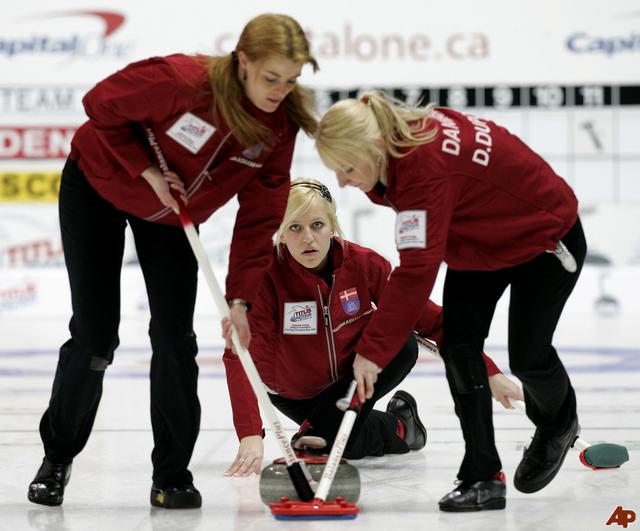 I've resisted the Olympic Fever up until now. I...don't think I can hold out much longer! The biathalon has been going & is still going, but the US is boring in it. Tonight Jenny hung out with one of her friends, so I decided to powerhouse the gym. I did an hour & forty-five minutes, & part of that is because I did cardio while watching the US Women's Curling team lose to the Danish Women's Curling team. Curling gets a bad rap, I'm cool with it. Mostly, Madeleine Dupont (Denmark, above) had this super dark eye make-up & this hawklike stare when she threw stones that was pretty compelling. Anyhow, there was a chance at the end for USA to tie it up, but no such luck. Also on the tube was the Cash Cab episode with

ravenface, Dan, & Richard in it, which I watched & was tickled pink by-- pink as ole Salmon's belly. Also bumped into Martin there. Now I'm home, & hey, now Jenny's home too!
Collapse