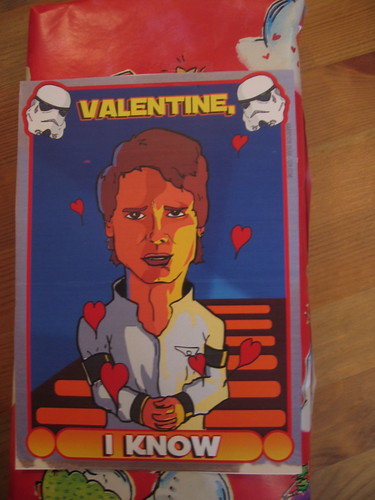 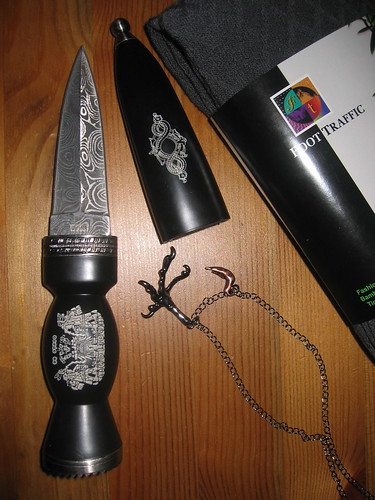 heatherica wanted to know what I got Jenny for Valentine's day, so here you go. With the Han Solo Valentine card on the packaging, there was a new dagger, a neat bird claw necklace with a jawbone charm, & some tights made of bamboo yarn-- & not rayon claiming to be bamboo. We slept in, & so far all we've done really is made french toast & bananas. Later we're going to Beer Table for brunch. Jenny says we usually go to communal tables for Valentine's Day, but last year & the year before we went to Perch. I guess in 2006 we went to Ginza for hibachi. Otherwise I've been reading & writing at Kit Marlowe & Co. about Schwa.

Yesterday I fooled around the apartment all morning. The exterminator came, for one thing. For another, I beat World Nine in New Super Mario Brothers, but I still have to catch all the coins. "Catch" is a term I stole from Brian & Jocelyn, who speak of "catching" the stars in Mario Galaxy. Then eventually

fordmadoxfraud came over & we went to the gym! I like working in with someone; I feel like I push myself harder both because I have a chance to rest between sets & because of showing off. Like, I won't cop out & only do three sets when I should do five, for instance. So we went for an hour & a half, & on the cardio I flipped between Dodgeball (which, to tell the truth, I saw in theaters & it cracks me up) & Equilibrium, which I've actually never seen. I kind of like the look of it though. Then we came back & we started talking about his character for my next Oubliette game, Luther Mid-morning, of the House of Cups. Then! He went home, Jenny came home, & we watched Modern Family (which is hit or miss, but this one was a hit) & Leverage (have I mentioned my crush on Beth Riesgraf?).

Penumbria was the Planar & Spelljammer superculture of the Mindflayers, or at least the name of the Dyson Spere that was its capitol. That kills me. Anyhow, that doesn't factor into this book at all! Though I did quite like it; I tend to like DnD books about the Underdark. It, like the Planes, allows DnD's madcap sort of high fantasy to morph into high weirdness, which is much more to my liking-- plus, the otherworldly setting makes suspension of disbelief a little easier. The book is set up to recapitulate the layers of the Underdark-- Shallow, then Deep-- with chapters devoted to the off-plane versions of the Underdark, the Feydark (Underdark in the Feywild) & the Shadowdark (Underdark in the Shadowfell). I have to say, that is a clever little conceit. Each chapter ends with a sample adventure, which isn't of much use to me but does come complete with all the stat blocks you might need. For me, the standout elements were the Grell Philosophies, which are both crazy & make a certain kind of alien sense (49), as well as the Eyes Unblinking, which are the rip-off of Peter Jackson's Barad-dur searchlight Eye of Sauron (103). They are an evocative & useful twist. Really, the Feydark in general is my favorite, including the mythology of Deadtrees (106). Monsterwise, I just realized that the gas spores (those fake beholder mushrooms) are tied to the myconids, which is nice. I like the Incunabulum, but then, I'm a sucker for Vecna worshipers. Oh, & Torog, the King that Crawls? I guess his weird sadomasochism makes sense-- evocative art & anyhow, I like anything that makes "evil mastermind" cliches make sense, & Torog provides a good excuse for bad guys to capture rather than kill, & try to turn the PCs to evil, too (156). 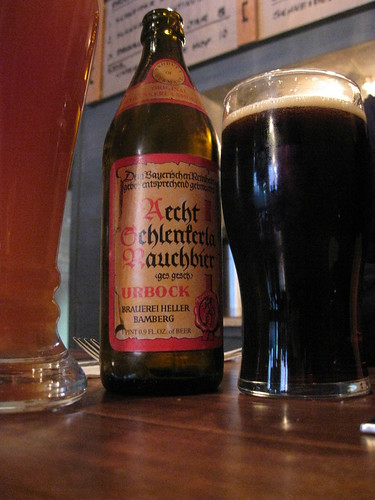 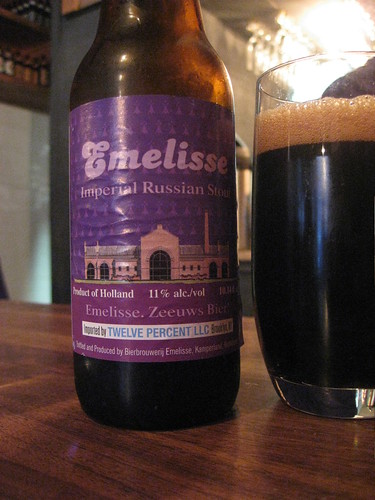 Last time I was at Beer Table I had the Harvey's le Coq, which I could only remember was described as "cigar smoke" & "balsamic." I took not this time-- it is also said to be "brine" & "bitter earth." This time I had the Schlenkerla Urbock which they say is "huge," "smoky," "meaty," "rich," "bready" & "sausage in a glass." Which is what it was: like good meat flavored beer. What! Then we had our waffles-- Beer Table is having brunch till midnight. We had baked eggs & toast, & then we split waffles with caramelized bacon & waffles with pears & ricotta. I am...now a huge fan of Beer Table & only want to go there. I finished up with Emelisse Imperial Russian Stout, which is "deep," "chocolate," "berries," "oily" & "silk." I'm pretty interested in the fact that I have a palate for beer but not much of one for wine-- or at least, my beer tasting ability is far superior. So that was my nice date with Jenny: now we are watching High Noon, because...well, because it is hilarious.
Collapse