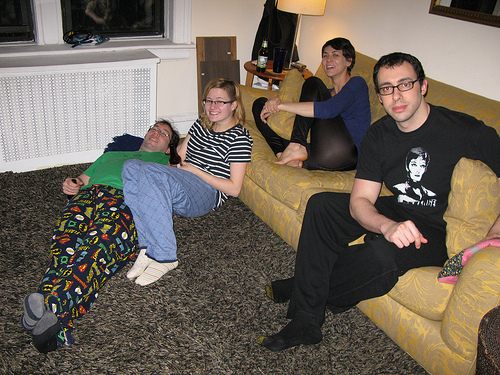 The occasional obsession comes upon me! Like, I really want the miniature for Sly Moore. You know, Sly Moore, adviser to Chancellor Palpatine! Why, why do I demand this? I have no answer to that. Yesterday was a snow day, but I still came to work; they sent us home early & gave us extra vacation, we soldiers who trooped in. I was pleased enough to dig myself a little out of my hole. I went home & Jenny & I hung out; did we watch some variety of television program? I think we must have, but I think probably just a loose chain of comedy news programs. David was the first one to get over to our apartment for Television Night, followed by Maggie & at last Lilly: James & Emily being already present. We continued to not watch Lost, saving it for a more appropriate viewing venue. Instead we watched Solitary 4.0, which I'm very excited about. Pod Seven had contacted me when I'd tweeted about it, so I'm a little predisposed to like her; Lilly definitely doesn't though. Or didn't, I think by the end of the second episode she'd warmed to her. We were sad to see Pod Four leave though, since she was a favorite. The new Pod Six, aka the old Pod Seven, is a former favorite of ours, so we are rooting for him, but also he's already had a shot, so I can't fully commit to rooting for him, you know? Anyhow, we've only seen two episodes, & it isn't till after people have their emotional breakdowns & forget to separate their inside persona & outside persona that you really pick favorites. Lilly was talking trash about the various shots that they had to do (sardines + chocolate! Relish & re-fried beans!) so I told her to put her ass on the line & mixed her a vinegar & olive oil shot, which she downed like a pro, giving her full rights to rag on the cast. We finished up the night with How I Met Your Mother, & then Jenny & I did an improv Valentine's Day song, in the style of Wiig & Armisen. Lilly took a video of that, maybe she'll post it. Then to bed, & then this morning! I didn't want to do anything besides stare at a computer screen this morning. I still don't! I should ship some stuff before my meetings kick in hardcore though.

Can I also complain a bit here? In a twist that is partially my fault, & I think partially Kevin Siembieda's fault, I got the wrong book from Amazon. I think-- I think that the "new" (2001) After the Bomb book...uses the same ISBN as the old (1986) book? Which is crazy, who does that? It is a "second edition," even though the books are fundamentally different. Either way, Amazon seems to be confused-- actually, everyone seems to be confused about it. I didn't realize this was such a quagmire, so I ordered a used copy of After the Bomb, expecting the new version, since that was the cover shown. I was wrong, though, & didn't pay enough money to make it worth a fuss-- & really it isn't the seller's fault-- Amazon had the wrong cover, I had the wrong idea, it was all just a critical mass of honest mistakes. I'm just bummed, since I want the book! 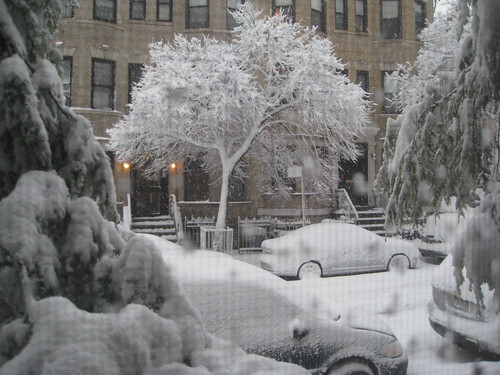 (Snow outside out apartment, photo by Jenny.)

There are a few points where Gene Wolfe talks about torture & punishment in The Book of the New Sun, most notably in Sword & Citadel. Which touches on some of the questions & concerns I have with crime & punishment. People talk about the American prison system-- which is clearly broken-- but the fundamentals of it are still in question, as far as I'm concerned. I mean, it is easy to say that prison's shouldn't be money making institutions that thrive on creating repeat offenders, or that more focus should shift to rehabilitation, but that is just prison reform. I'm not entirely convinced incarceration is the best solution, & apparently, neither is Gene Wolfe. I don't think it occurred to Mister Wolfe that people might not see Severian's upbringing as a torturer as anything other than villainous-- that is why it takes him till the third book to directly address the concepts of justice & revulsion. See, The Guild of the Seekers of Truth & Penitence are a legal & ethical branch of law enforcement. It is Severian's argument-- or the argument of the guild, through his mouth-- that imprisonment is unjust to the innocent, in that they pay for the guilty to live & eat. That forced labor is unjust because it takes jobs away as well as requiring that they labor under the lash-- which is functionally the same as torture. To that I'd add that creating a state the has every reason to want to convict people for free slave labor is a bad idea, too. Then again, that is what we've got with prisons, isn't it? A system with a strong racial divide, a system that exists to churn out money. Torture-- capital punishment-- is the system that Severian's Commonwealth uses & he maintains that at worst it is no more unjust than any other. Now, we can talk about rehabilitation-- great! Except, that soon becomes code for incarceration. Tricky. Public shame is a good one, too, but it fails at some level, especially on those who either opt out or are disenfranchised by the social system (see also, strong racial divide). Tricksome.
Collapse