Citadel of the Autarch by Gene Wolfe.

Phaleg & Hagith
the siblings of Urth wait too
for Och, & Ushas.

I finished this on the train today, which may just be the feather in the cap of my New Year, New Sun Project. I am debating reading Urth of the New Sun but like I decided with the unread Wolfe lit crit I might save it for the next New Year, New Sun. After all, a month & a half of relentless Wolfe is some rough work. Pleasant work, but it isn't easy lifting, I'll tell you what. Maybe I'll slot Urth of the New Sun into the same sort of reading paradigm as I put Fifth Head of Cerberus this time. So now I'm left with sort of the deep sigh of relief that comes after a day of labor. A solar day of labor. I still want to encourage the people who read the books or got in on the project to write about it, so I can link to them; I want to catch the wind on the sails of the internet!

Citadel is the epitaph of Urth. In it, we see the Dying Planet stretched thin by war. War, in this case, between the Commonwealth of the Autarch (Severian's failing nation) & the Ascians (the Orwellian dystopia). Severian has heard the rumors & rumbling of the war, & now is thrust into it. Along the way, you can almost feel the warp of the fabric of the story. The narrative is jarred, shaken loose by events. Things stop abruptly & pick up in different places; the line of text shellshocked. Events are haphazard, run together as the confusion of war jostles Severian from one setting to another. This isn't contrived, or to say they are stitched together set pieces; rather it is an organic telling of the chaos brought on by being surrounded by the sinister & dexter hands of Death & Killing. It allows the slipping in of world building details-- destriars faster than race cars, clawed of hoove & meat hungry. It flexes the other way, allows deconstructed pieces of the story to not just creep in but be thrust in as well-- Ash & the Green Man, the two counterpoints of the future. & so I'm pleased, glad to come to the end again & see how well the foundations of the tower are built. & to say that yes, Severian the Lame will go to Yesod & be found fit. Even without Urth of the New Sun to make it explicit.

I took a few notes to check etymology-- then into the mud & blood! We have Master Malrubius in a dream, sans Triskele--but wait, there he is, playing in the water (221)! Then Loyal to the Group of Seventeen appears, one of my favorite guys of all guys (224)! We have the dubbing of the (un)dead soldier as "Miles" by Severian, & discussion about Miles as Miles/Jonas as Severian is Severian/Thecla, which is odd; Miles/Jonas is hinted at but never really solved or addressed (229-231). The Pelerines have a pretty...interesting understanding of good & evil, or leaves & roots; I say Pelerines, but all the theology here is Wolfe musing, isn't it (240)? Then we have a great deal of discussion on the after effects of the analeptic alzabo; sick people seeing Thecla or people who can see in Severian that Thecla lives on, & more to the point a comparison of Severian & Thecla to the Vodalarii junkies culminating in the theory that the Claw of the Conciliator "resurrected" Thecla in him (242, 252-253). Oh & Gene Wolfe describes someone's hair as the colour of wine & it struck me as beautiful & evocative (266).

On the way to the Last House, Severian links it to his thoughts of the Botanic Gardens & the Second House of the House Absolute; it also figures in the Atrium of Time, the Corridors of the Green Man & the aquastors, & the Ship of Tzadkiel (279). Master Ash, when he appears, is like a cartoon of "God," with his flowing white beard & all that-- I can't quite grasp the relationship he has to the hierodules, since he seems to be apart from them in some way (281-282). He makes an off-hand comment to a story of a man with no reflection traveling with a man who has no shadow-- what is that story (282)? He posits that science & religion are both articles of faith-- a statement I can't help but disagree with-- & that dualism seems echoed in him & the Green Man, in ice versus lush flora. Then Ash speaks of Vine-- making the Norse roots apparent-- & Severian speaks of Meschia & Meschiane, little realizing how he figures in (290-291, 327). Then of course, Ash is gone.

When Severian joins the Irregulars, you start getting glimpses of the world though the lens of war; better descriptions of the destriars for instance (299) or the strange winged anpiels (307) & casual off hand comments about clone armies (318). Then we have wee little men riding on the shoulders of blind men-- which reminds me of the Shadow Children from Fifth Head of Cerberus, who even blind the marsh men they ride on, if I'm not mistaken (319). Severian mentions a memory of babyhood, & that his astrological sign is the Swan, but does precession ever make Cygnus a astrological sign like Ophiuchus (325)?

Then into the Thousand in One, the Self Governor. We get more discussion on the nature of crime & punishment, on guilt & sin, highlighted with the use of the term "clients" (327-328). The Autarch of course can see Thecla; how does he pull off that trick, I wonder (330)? Oh & then Severian is bit by a vampire bat-- which, call me crazy, but I can't take as a coincidence given the bites on Jolenta & the existence of the inhumi (345). Then the phial of the Autarch is said to be filled with a different drug than the alzabo-- wait, what (355)!? The Green Man says he will send two friends to Severian-- does he mean Malrubius & Triskele, or does he mean some other adventure up or down the timeline (358)? We hear about Hethor-- it is made pretty explicit that he summons the alien demons by use of mirrors, so that is the nail in the "shapeshifter theory" I think (359).

I can't help but crack up at Master Malrubius' jokes about being deus ex machina (360). I mean, it is such a fun pun across so many levels of the text. The last big hole Mister Wolfe pokes in the story for the author's eye to peer out of. Then the aquastor's call Mars "Phaleg," which is fine & all but as far as "true names" go, I think it is hard to beat "War" (363). There is the story of the angelic creation; the super Other, the masters of the holy slaves, which I think the text definitely holds up as true (384). Then, in the secret rooms of the Autarch in the Citadel, we see just a few more tossed off wonders-- the Emerald Bench, & the psychic mandragora-- the latter of which makes me wonder if there is a twinning it completes (386)? & the "false coin" of Vodalus, as pointed out by Doctor Talos-- odd, since we hardly need it made clear that the best parts of the Vodalarii are a fake (394). A last stab as Ouen speaks of Catherine as a "mother," & alludes to a past as a nun--a Pereline, I'd guess, wouldn't you (402)? Then, the last thing that jumps out; as Severian leaves clothed in fuligin, "the colour darker than black", at the start of the tale, he ends it in argent, "the colour purer than white" (405). Uh oh, getting a little C.S. Lewis with the symbolism there at the end, eh Mister Wolfe? 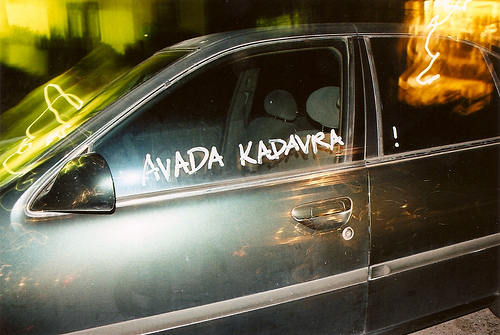 I don't have anything to say, & it is my favorite. Seriously, the notion that excitement is required is one of the illusions of youth I'm happy to see evaporate. Of course, thinking about it now, I didn't really adhere to it then, did I? Missions were just a way to keep you occupied in between trying to find roleplaying games to play or whatever. I'm doing nothing & it is pleasant. Last night I went to the gym, & Jenny came with me; I had a pretty okay little work out. I'm currently doing forty-five minutes (:45) of machines & free weights & thirty minutes of two sets of cardiovascular (:15, :15). After that we came home & Jenny made these little chicken fingers baked in coconut; we ate them at the table like civilized aristos, & then we settled in to watch Castle. A particularly convoluted episode, especially given that when you have Ray Wise in your script we know he is the villain. You aren't fooling anyone. At least the daughter was around; she has been under used lately. After that it was to bed; some giggling & such, then Jenny fell asleep & I read some. Like I said; nothing happened & I liked it. Oh! &^ yesterday I heard the AM New York newspaper guy say "Read all about it!" which is great! Wuxtry! There was some talk of a snow day today, but I never thought it would happen (though now I'm told we're off at three, off early & rewarded with extra vacation for coming in) & anyhow, I've been productive today. Like, I made a post at Kit Marlowe & Co. about role-playing books.
Collapse