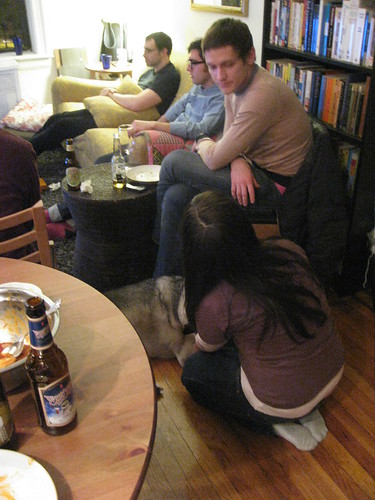 Oh, man, I have a lot of good books on deck. Seriously, the New Year, New Sun Project has sort of devoured my life-- I'm reading slowly trying to soak up more of the text, but I'm maybe forgetting that non-Solar Cycle books exist. I have a book of crit that I've read already that I was considering reading, & another book of lit crit that I just picked up last month; I'm not sure about them though? I might just read Urth of the New Sun as a capstone (I think I'll claim it as a secondary source-- I don't count it as full canon!) & then save the rest for a future New Year, New Sun. Maybe! I just have all these other books I want to read-- a fashion book, a Sarah Blaffer Hrdy book, Shardik, & some other stuff I'm anxious to get too, as well.

This weekend was a blaze of glory. Freyja's day was I think the only night I had to myself. Well, ourself, me & Jenny. I couldn't tell you what happened though. I have seriously no idea. Probably a little television? Or wait, was that when I was fussy & just wanted to doodle in my notebook? I think maybe that. Saturn's day I went to the gym & had a glorious little work out-- I was looking in the mirror when I grabbed a barbell & mistook a "90" for a "60" & then decided to work with it instead, anyhow. I've also been trying to vary my rep/set/weight combos more. Then it was off to Kat's! She's away on sabbatical for a few months, so this was her send off. Smashed champagne on the bow of the ship & whatnot. I ended up getting weirdly maudlin & sentimental! You know, like, nostalgic for things that were currently happening. It was time for me to leave! I left myself a note on my bookmark too, reminding me what page I had been on before I started reading drunk. Very considerate, Mordicai!

Sun's day, I was a little woozy but again to the gym! Well, first SNL, then to the gym. Another fine work out, courtesy of my muscles. I think I am doing better at getting back on track; seriously, the end of last year I was an attendance disaster. Then there was some shopping fiasco, which had actually started yesterday. I had to juggle two grocery stores between each other to get the ingredients Jenny needed for our Super Bowl Party. Yes, you heard it right, "who is that!" I (well, Jenny really) had a football party. The last few years I've played Dungeons & Dragons every Super Bowl Sun's day, but not this year. We (uh...Jenny) cooked up some hot wings, & some pizza with sopressata & shallots & asparagus on it, along with you know, stuff like chips. Our attendees were

toughlad, Phil, Carla, Kenneth, Claudio the dog, & Nino. I was a good sport! I'd looked up talking points on Wikipedia! Anyhow, I don't mind football. It is the least boring to watch, because intelligible things happen-- thrown balls are caught or not, running men cross lines or don't because they get tackled. Plus, the game was not mired in gridiron, there was all kind of motion. I rooted for the Saints on account of my New Orleans friends, & because I don't like dynasties. Carla made me a cocktail out of Ciroq vodka. Then, to bed.

Over at Kit Marlowe & Co. I wrote about Watchmen 2.
Collapse