Sword of the Lictor by Gene Wolfe.

The moon is made of:
green cheese. No wait, green forests,
reflecting sunlight.

I was joking around with Jenny about how much plot this book has. I am sort of renown for liking "boring" things-- which I guess means atmosphere, worldbuilding, mood, & intricacy. No, I will admit it, I like boring things; people say 2001: a Space Odyssey is boring, but I could deal with that perfect pitch of pacing all day long. Gosh I sure do like that movie. Or Anathem, which people criticize for being slow-- me, I would have read a trilogy just set within the Math, just secular monk gossip & fraas getting into debates with each other. So yeah, maybe the slow meandering of Severian in Shadow & Claw is to my liking, so what! I want to see more how the city of Nessus works; or rather, I want more of the puzzle pieces provided, since it isn't like Severian will actually explain it. I want our young torturer to wander the countryside, to find out the Commonwealth lives. Jenny on the other hand throws up her hands when a myth-cycle drops; "get on with the story!" So yeah, apart from the fully awesome story of Frog & Fish (Gene Wolfe's retelling of The Jungle Book slash Romulus & Remus slash Cain & Abel &c), this is just nonstop action. Severian fights the alzabo, gets a son, climbs mount Typon, meets Typon, finds the castle at Lake Diuturna, meets the cacogen-- just one thing after another! I think it might be the most action packed part of The Book of the New Sun.

Also, it is very important to note the online resource Ultan's Library.

Alright, now to get to the rundown of page numbers I collected. Right out the gate, I really like the names Thrax accumulates: City of Windowless Room, City of Crooked Knives (10, 16). We see the first mention, I think, of the bag Dorcas makes for the Claw-- doeskin, though apparently later Severian claims otherwise (13). Also, I think Severian has sleep apnea-- at least, it sounds like it to me (13)! Transubstantiation of trouble sleeping reminds me of, well, me. The big from the Brown Book about exploring a city-- is that an adaptation of something Borges wrote or does it just sound like that to me (15)? Eventually Severian makes a few descriptive comments about the mountains-- not yet do you realize that they are not poetic metaphor but literally accurate-- that comes later (17, 72). Then Severian gives his "defense" of torture-- which I think is probably necessitated by readers of the earlier volumes being unable to understand out Severian is "just" due to their own cultural bias (20). A few pages later, Gene Wolfe openly laughs at the reader, pulls his hand out of the puppet & waves with his "...in books..." comment (24). Then we have Dorcas-- Dorcas of all people!-- giving the exegesis of the book, or at least the semi-hidden exposition on the hierodules (36). Then more action-- the Salamander, which Wolfe describes with such perfect grace & fear (51). The Gene Wolfe makes a jab that lands on my chin, about crazy people thinking the marks of larvae under the bark of fallen trees is a secret language: I certainly have thought so since I was a boy (58).

Then into the mountains! Mister Wolfe again makes a few playful pokes at the genre, at science fiction & so forth (71). Then we're into the doppelgangers; little Severian & another Cas (78,79). Later there is some talk on Hethor's name-- what it is, I can't be sure though I wonder if he is a shapeshifter (83). Severian makes some talk on the subject of the children of the zoanthrops; I wonder at them, that is a nice little detail (98). Wait! I just realized that Severian & Serevus Snape have the same name! Hah. Severian talks of constellations-- Big Wolf, Little Wolf-- which figures Big Severian & Little Severian, too (100). Then, The Tale of the Boy Called Frog & I wonder if Spring Wind's bride Bird of the Wood is meant to be Luthien Tinuviel, or if I just see the Nightingale in every beautiful woman (103)? I again wonder at a visible Thecla, though the circumstances are once again a-kilter (112). Then-- the scariest image in the book, maybe in anything, the evil Emperor who will go around menacing you all the while masturbating; crap, he's awful (141).

The marionette comes back, & keeps dancing till it is fulfilled (149, 190). In his trek to the confrontation at Diuturna, with his talisman weighing down around his neck-- we're into Frodo turf here, though the Claw is the inverse of the Ring in every way, almost purposefully (152). Oh & of course we're not finished with the doubling, as Pia comes to mirror Piaton-- what is up with that (154)? Oh but then we get into looking at Baldander's crazy castle; both the first, false impression & the actual truth of the Toadstool Fortress are fantastic & terrifying (172). On to the cacogen, or well, the hierodule or however you like them; I can't help but think that while Familius & Barbatus are angelpeople (female & male, respectively) perhaps Ossiopago is a more conventional "chem" or something in between-- bone being the most mineral viscera, right (176-177). & he certainly shapes Baldander's bones, though at steps removed, always steps removed. Then there is Doctor Talos' great exclamation-- "The castle? The monster? The man of learning? I only just thought of it" (186). I do so like my Frankenstein, & I like to imagine all the punctuation in that sentence transformed into exclamation points. 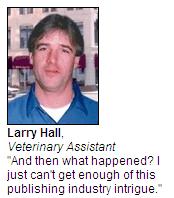 Worked yesterday; there might be a chewing out in store for me, as I predicted, thanks to the whole ill omen of stars around the giant pile of boxes. Still, making good headway against it, & really the trouble was inevitable, thanks to the conspiring of events. Then last night...I ran into Jenny at the gym! Which is fun; I've been trying to convince her to go, but she is unmotivatable. I can have the same problem; good luck trying to get me to do something I don't want to do. She takes the cake, though. I went to the gym & figured out this: I want to use the bent bar from now on. My wrist has been kind of bugging me, & I suck at letting things heal: as soon as it starts feeling a little better, I go back to taxing it. Anyhow, the bent bar doesn't even a little big aggravate my wrist, which is its whole point, so I'll be using it more. Came home & Jenny made more...chopped vegetables with chicken on top. It is good! We watched Tosh.0 which has been a little boring lately. Seriously, I already overlook its stupid misogyny & race baiting because it is funny, but if you are going to be a sexist who isn't funny, then I'm out. Luckily, the Web Redemption made me laugh. Then we watched Community, which continues to be a lot of fun. I also continue to be troubled by the messages they are sending me about Annie; she is clearly the hot one! Stop acting as though she weren't! Finished things up with Parks & Recreation, which is mostly worth watching because of April. Then, to bed: midway through the night though, I was woken up by the people upstairs having sex. It made the floor creak like...like a parody of people having sex. Then I had to listen to the male's post-coital braying. Ugh.
Collapse