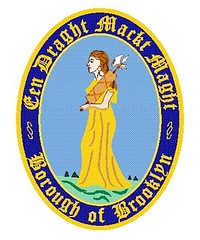 I am now zoned out. Snap! Listen to that sky crackle, the sound of dead air & bleeding firmament. I came into work & immediately kicked the crap out of a load of boxes, but now the urge had lifted. The train ride this morning was annoying; on the plus side, Jenny came with me to Dekalb, but on the minus side, the lady next to be was a jerk/idiot/idiotjerk/jerkidiot. First fact: I am a subway warrior. You want to sprawl out on the train? Put your bag on the seat? Congratulations! I'm going to sit next to you. You win! I'm not talking on empty trains; I'm talking the foolish souls who hunker their meat in two people's worth of space on a crowded subway car. Ta da, you've just attracted my passive-aggressive vigilantism! So the lady I sat next to today was all fighting back with rude elbows & forced coughing. You terrible person! I wanted her to try to litter or something so I could scold her. Yes! I scorn the litterbug, I say to them "sir, you dropped your lottery tickets!" or whatever. Take your garbage, scow!

Last night I went to the gym for the first time since getting sick, & it was fine. No weakness; I am grown strong again! So that is good. I'm kind of considering going tonight, too. Anyhow, I had a nice little work out-- Groundhog Day was on-- & then picked up some groceries & came home. On the walk, I had a nice little chat with Brooklyn, or as I like to call her personified genius, Een Draght Mackt Maght. Civilization! I like to give myself to it. I can't really consider the existence of other people, but I can think about the Other & the Hive. I choose the Hive, lets all be one. I'll invest in the things around me. I'll dissolve & mingle. We can all share Mordicai. Got home, showered, & Jenny cooked up some kind of tasty supper-- finely chopped up stuff with chicken thigh on top. I drank a banana bread beer & we watched some television. We decided to forgo Lost for the moment, so I'm dodging spoilers; there was nothing to do then except watch politics.

Or politics commentary & editorial & parody-- your Rachel Maddow, your Daily Show, your Colbert Report. I was almost convinced that the Progressives were going to successfully turn the Conservative rhetoric against them! The President speaking at the Republican Retreat for instance, or dogging them for dropping out of the bill they co-sponsored. To me, that seems the easy way to go; they've made such a paper tiger out of the President (who I'm not really a fan of) by painting him as Black Commie Hitler that it shouldn't be too hard to knot a noose with all the rope they've given. Which, like, the Planned Parenthood response to the Tebow Anti-Choice ad. I feel like the Pro-Choice movement needs to understand that they won the language war. See, the Anti-Choice people tried to be cute & co-opt the language of Pro-Choice. "Choose life!" they say. Sarah Palin talks about considering an abortion when she found out her embryo would have Down's Syndrome, but she too chose life. What both sides seem to be missing is that the language is set: choice. They keep saying choice, talking about making choices. The Pro-Choice movement needs to capitalize on that, before the current SCOTUS betrays everyone again. Like that time they pretended like corporations are people. Bastards.
Collapse