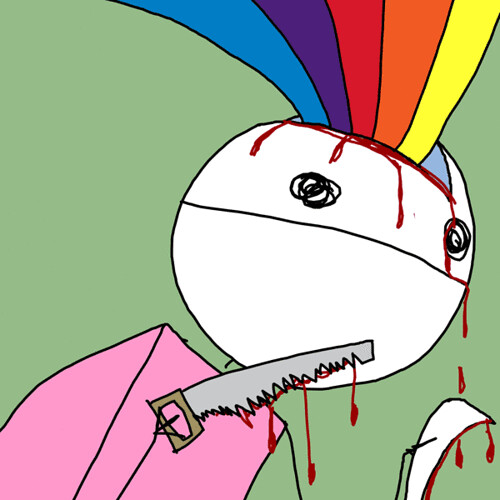 ("In My Head" by Sam Brown of ExplodingDog.com)

I wish I could remember my dream last night-- it had a vividness of colour that I associate with LSD, not that I've ever partaken of the fruit of ergot myself, of course. That isn't a joke or anything, I haven't; I would probably flip out, you know? Or well, when I was of an age to partake I would have; now my whole broken seraph thing is tempered by being a cunning warlock. Regardless, dreams! The first fragment was an alternate universe dream; rather, an alternating universe dream. The secret to traveling between timelines was the rainbow! Or well more accurately, it was the scintillating stream of possibilities that came through the suicide of the ego. I know, right! You would just dip in to them, simple as Superman singing a song that saves the universe, & tie the colour flow up in knots. Of course, I got into some trouble when the Shadow Children traveled back in time to when I lived in the suburban enclave in the Wasteland. They started gloaming on to that alternate timeline, trying to snuff out the future ones; luckily Jenny woke me up since I was choking from apnea. So this timeline roundly defeated the Shadow Children-- suck on that, Shadow Children, another round goes to Mordicai! There was a second plot line afterward; I think ducking in & out of rooms in a Memory Palace, different places corresponding with different periods in time while being remixed with those next to it; each room set on the tooth of a gear. There was a big gear, then a vertical gear, then a smaller one; the three would braid together to make, for instance, Amelia Earhart in a ufo jetpack fighting off cave men, or Haile Selassie in a steam driven mecha in post-apocalypse Dubai. Those things happened! Oh & I should mention while I'm at it that I blogged at Kit Marlowe & Co. about comics.
Collapse