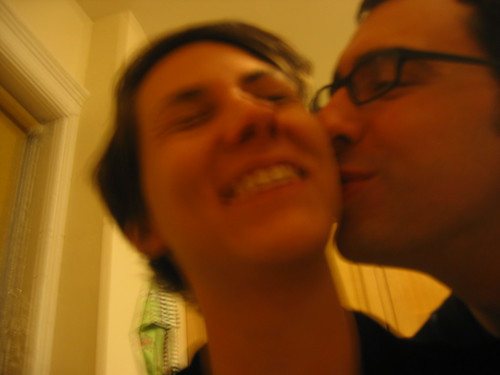 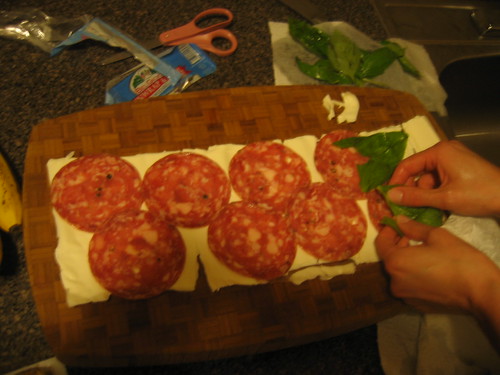 Yesterday was a waaaaaaaaash. I took a ride in the waahhmublence. I was just so lazy. Too lazy to finish sentences even or rite cliq on speling mistaces. I caught some Star Coins on Mario but couldn't get in gear to go to the gym. Eventually Jenny came home & was like "whhhhaaat?" because I was basically sprawled out over the apartment uselessly. So, I took a shower & shaved: I even removed the hair from my face! I took some razor blades & clipped the fur on my skull! It was a big deal. Then we went to the wine bar, [Brook Vin]. The guys who own Big Nose Full Body own it, I guess. That is what my date told me! My date was my wife. Big Nose Full Body is kind of far from me-- or rather, places are closer-- but when I've been there they've been really nice. During the Great Angostura Bitters Shortage they helped direct me to a "secret stash" & got me the HOOK UP. So we went to [Brook Vin] & got-- what did we get. I got a peppery wine; uh, PennyFarthing I think. Jenny got some tempranillo, but I can't remember what it was called. It might be on the receipt but I am not going to try to find it. Then there was, what do they call sandwiches when they don't want to call them sandwiches...tartine. Oh wait, Jenny just got the receipt, she had Pinuaga La Senda & mine was Pennyfarthing Bernera. We also had a pot pie. The moral here is that we had a very nice date. We tried to figure out what teenagers might like; then we tried to figure out what teenagers liked when we were teenagers. Seriously-- Nirvana? Gangster rap? I guess Dragonlance novels don't count. Or Robotech episodes, or Teenage Mutant Ninja Turtles. What the heck, teenagers. They like Twilight or something. What. Anyhow, we saw

kromelizard on the way to the grocery store, where we got a...we got too many hors d'œuvre. It was fun but kind of gross. What did we end up watching; I don't even remember. Something good. Good television! This morning Jenny was sick; she's still sick. We had some food from the cafe, & watched some more television. Castle, Community, Modern Family, infoMania, & some other stuff. Some stuff. I don't care! POST!

So Jenny & I just got finished watching Battlestar Galactica: The Plan. Well, first I went to the gym, got us Chinese food, & we watched Leverage, but then we watched The Plan. Pretty roundly the response from the peanut gallery who had seen it before us was "meh," & I'm afraid I have to echo that. Still, it is a pleasant "meh." I wouldn't unwatch it, & would have felt fretfully broken without it. See, the thing is Battlestar Galactica was amazing. It was bar none the best program running, when it was on. & I happen to think it had a good ending. People complain-- things weren't tied up in a bow! What is with the ambiguous ending! Frankly, I am more than fine with it. I really liked the last episode for being one that addressed the character's arcs, rather than the show's plot. See, here is a dirty little secret: they didn't have any idea what they were doing, when they were making the show. It wasn't an intensely plotted mini-series & four seasons; it was a always at risk of cancellation gamble. So yeah; some things aren't dealt with or don't make the most sense. That is, I think, the problem with The Plan. Taking the emotional & thematic capstone of the show & trying to use it as a Rosetta stone for the rest of the series may be an ambitious critical attempt, but it is unsuccessful as a narrative one. Still; you get to see One & Six & all the rest. It is like being haunted by the ghost of something wonderful. It is the reflection of the show in its glory. Not the real thing, but in the absence of the genuine article, I'll take it. It made me say: "I hope in ten or fifteen years when someone remakes this show, the cylons do have a really tightly wound plan." Since, hey, now the cyclical nature of the show demands the occasional reboot, right?
Collapse