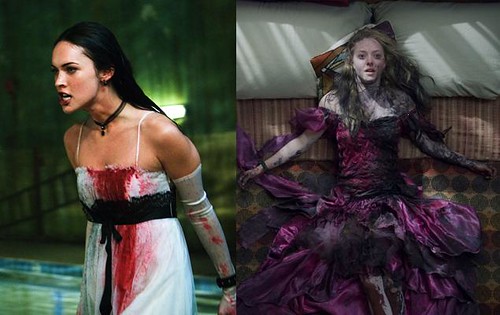 I went to the gym last night & then came home to watch Jennifer's Body. I was trepidatious; I wasn't really in the mood to watch it. The opposite of gung-ho. Still, it was due back at the library, so Jenny popped it in & we settled into the couch. You know, I ended up pleasantly surprised? I think I really liked it, actually. It made me feel old though-- I feel like the very firm underpinnings of the movie were Buffy the Vampire Slayer & the Scream movies. Diabo Cody's quippy style really suits the sort of post-Buffy horror world; I wouldn't mind her getting in on that rumored Kuzui reboot. I think the bad reviews & bad reaction happened because of two things: one, it had a terrible marketing campaign. This is not a movie about Megan Fox writhing across the floor sexily & biting dudes in the face. Well, it sort of it, but that is only a facet of it. Which is problem two: the movie confounds genre. Which, to me, the guy with no expectations, was awesome. The movie isn't easily cubbyholed; it is as much a teensploitation exploration of High School friendship (& romance to a lesser extent) as it as a horror film as it is a spoof of horror films. It dances between them in equal parts-- again, I know I said this already, but the nearest comparison really is Buffy. Plus, Amanda Seyfried is hot, & while Megan Fox might not be all that she's currently accepted to be, she is also pretty & you know how I am with Evil. Also, they kiss, & it was pretty hot, & then I kept acting like a creepy old man about it all night. & Adam Brody's pompadour was killing me; he looked like a Guitar Hero character. So yeah, I liked it; I recommend seeing it with your expectation-switch turned off. It was funny, the demon-possessed aspect, since it is clearly a vampire movie. Girl dies, comes back to live, needs the blood of the living to retain her youth, is all seductive, can only be killed by a stake to the heart, her bite...well, its a vampire movie that refuses to admit it, is all I'm saying. As to the feminist angle; it totally is. Forget the plot summary, which makes it sound pretty troubling; this isn't a movie about rapist Satanists. It is a movie about two girl's friendship, & also murder. Boys do not swoop in to save them. I'm down.
Collapse