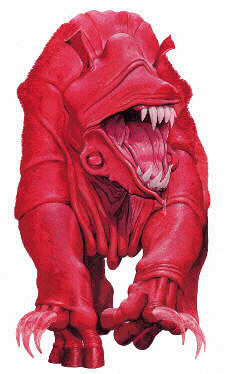 Today's good news is that Jenny finished Shadow & Claw which means that I can dig back into New Year, New Sun. Breaking the fourth wall for a minute, if you are reading it, make a post about it, & I'll link to it from the source page, & thus will the web spread ever further. I stopped after Shadow of the Torturer to give Jenny a whack at it, & I'm pretty excited to pick back up. See, I told people I'd wait, instead of just merrily blundering on ahead. So I'm back onto the primary text! I have to admit, I got a lot of thrills vicariously reading it through Jenny. I got to keep prompting her with questions about Jonas, or where Severian was, what he was doing, if he'd "gone to any fancy dinner parties." Claw of the Conciliator has so much meta-text from the Brown Book, & Doctor Talos' play! I'm pleased to dig into it. Jenny is out at Kira's tonight, maybe I'll crack it when I send this.

Slightly to the left of The Book of the New Sun, I want to talk about the inhumi, the aliens from The Book of the Long Sun & The Book of the Short Sun. I think Gene Wolfe really hit upon an endless well, there. See, here is the very simple "gimmick" of the inhumi-- they are shapeshifters. Done & done. Now, that sounds like a science fiction trope, & it is. With Gene Wolfe though, as discussed in Attending Daedalus, subverting genre expectations is par for the course, as it what Zak of Playing DnD With Porn Stars (which is just what it sounds like) calls the "principle of gonzo anything-goes-ness." Which is to say, you can take a serious idea & make if goofy, but you can take a silly idea & take it seriously, too. Which Gene Wolfe is a master at doing. So-- you take your aliens, make them shapeshifters, & suddenly they can be both Alien & comprehensible. They aren't just utterly odd indecipherable creatures. The thing is...we get the same thing in The Fifth Head of Cerebus & in An Evil Guest. I know, I know, getting hung up on this kind of minutia is little more than masturbation, but bear with me. My interests are twofold: one, I just like worldbuilding; two, I like the elegance of it. Like I said when I read Shadows of the New Sun: I don't think Urth & Lune are the same as Blue & Green, but the Sainte planets I'm a lot less convinced about. Of course, the abos in Fifth Head of Cerebus have a creation myth that they originated from a star in a constellation that is visible from their planet...& that star is Sol.

So lets talk a bit about aliens. We have the Lovecraftian monsters of the sea, served by giants. We have the aforementioned shapeshifters. We have the hierodules et al, who have their origin played out for us a little. There are the Neighbors in the Short Sun books. There is the alzabo (pictured here in an illustration by Wayne Barlowe), which I tend to think is the same creature as the ghoul-bear of Fifth Head. I don't know that we see any other aliens on the stage-- the cacogen, but they are again a more convoluted case. In the end it doesn't matter if they are linked by plot & narrative to me, since they all spring from Gene Wolfe's head, Athena-like even. I just think it is very interesting the way that the aliens are artfully made; enmeshed in memory & subjective perception from the ground up, & ultimately (in the case of the inhumi) telling as to Wolfe's conception of sin.
Collapse