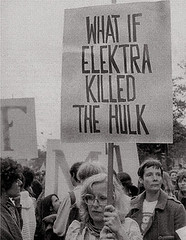 I can't really remember Freyja's day. I know we watched some 30 Rock & ate a whole mess of hot wings. Like, loads of them. I figured-- it is LIKE chicken soup, sort of? Went to bed early, you know? Woke up late. Saturn's day I woke up & went over to Adam's in the morning to help him move out. Which was quick; just helped him & Tania cart out the heavy stuff then bailed citing sickness. Picked up some La Bagel Delight, & came home. The only notable thing about the day was that we watched Dollhouse, which reminded me a lot of the spell Angel had cast on him to give him a moment of perfect happiness. Unfortunately, it wasn't a purposefully cheesy fakeout thanks to good storytelling, but rather because the whole series is ending & the last episode is going to be a sequel to "Epitaph One" which is fine with me. Frankly, I hope they fail in "Epitaph Two," since I really like the Thoughtpocalypse. We were supposed to go over to Nick & Rachel's for mocktails & THE FURY OF DRACULA but Jenny started getting very fussy, very terrible, gnashing her teeth! Was she upset because we'd been inside all day? Because she is sick still? Or what? Well, I eventually coaxed her out of the apartment, but she was too much of a mess to commit to social actions; so after playing phone tag with Nick & Rachel, we finally canceled & got dinner at Kiku. I wasn't nuts about it, but Jenny's insistence on mochi was correct. The "tuna dumpling" is particularly weird; the dough of the dumpling is replaced by tuna. So yeah-- next time we go there I'm going back to my standards. Then we came home & watched Paranormal Activity. I didn't need to see it in the theater, that is good. It was creepy, I liked it. People said Kate & Micah were more likable than the Blair Witch people, but I didn't really like them. It was also another movie where me being a warlock is handy. Demons? No sweat. I'm...well, I'm me, aren't I. I wish there was more with the attic; that was spooky, to me. Fun fact, when I was wee, I used to spend lots & lots of time in the attic. I even had a kerosene heater up there so I could hide there in the winter. It was a cave, a cave for me! I had to promise not to spook Jenny before we watched it. So yeah-- the "shocking ending" was pretty obvious but I think it was a pretty well made little movie. Today, ugh, I feel...not bad, but exhausted. I don't even know if I'll go to the gym. Sick-tired, you know? Stupid cold. Oh & I guess people moved in upstairs? Dammit, they better be quiet.
Collapse