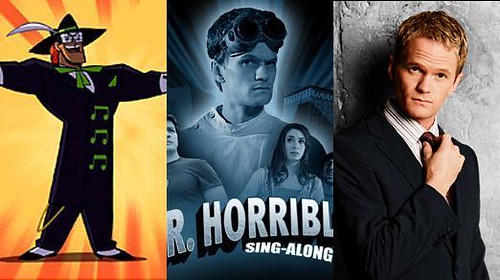 Last night we watched How I Met Your Mother's 100th episode. It was meh; I don't feel like they've really been killing this season. There was a big musical number at the end. On one hand-- between Buffy's "Once More With Feeling," & Doctor Horrible's Sing-along Blog, musicals on television (especially with Neil Patrick Harris) just scream Whedon. They have the same kitschy vibe, anyhow, with a reliance on clever word play. I'm not upset about it, it is just the way it is. Still, kudos to NPH for parlaying himself into being the guy on television who does song & dance numbers. I bet that is a pretty incredible coup, since it seems like that is precisely what he'd want to be if he could pick from all the jobs in the world. We also watched Community which almost convinced me Jack Black was going to be on the show. I mean, I didn't really think that, but I bought into it, I suspended my disbelief. Also I am developing a crush on Alison Brie. Speaking of people I have crushes on, Beth Jean Riesgraf (& I guess the rest of the cast) of Leverage are back. I am now a fan of the show, though this was a predicable "fashion" episode that never quite came together. Still sort of fun. Since I was fighting off a cold, that was the totality of my night. Well, & I watched the last half of 500 Days of Summer with Jenny. I guess I hate both of them. That is the moral of that story-- both of those characters fill me with contempt. Summer reminds me of Margo Tenenbaum-- that is, she reminds me of an archetype that a certain kind of girl aspires to be. The boy, I'm sure boys aspire to be him, which is hilarious, since he's such a ridiculous manchild.
Collapse