Last night was the reboot of

fordmadoxfraud's Orrery campaign. I'd played in the first session, but I guess no one liked their characters? Because everyone (besides Ian &

honey_rider, who didn't come) besides me made new ones. David started with a strange dream-war; a goristro & a dragon tearing a bunch of monsters up. My character hid in a crumbling tower. Then from there: wake up! Everyone had recent-memory loss, again-- this being now the second time that it has happened to me, but at least this time without the lobotomy bleeding. I was playing my goblin wizard,

elladorian was her revenant paladin (or was she?!),

toughlad & Erica were drow siblings, a paladin & a warlord.

john_naked was a half-orc ranger. I thought the group was a little big before game, but it actually worked out. I was the same, pipsqueaky spaz. I have a little voice, a little patois. Erica & James were freaking hilarious, probably the roleplaying award winners-- James went around shouting about how everyone was the slave of his mistress-- meaning his sister-- but it was Erica who pulled out the punchlines. Like-- well, there were lots of babies. It turns out this party is into stealing babies. We're like the evil Babysitters Club. When James' drow gave the 1 year olds scalpels, they started sucking on the ends. So James said "These human apes are not combat ready." To which Erica replied, in her best steely voice: "Then make them ready." Which was...brilliant. 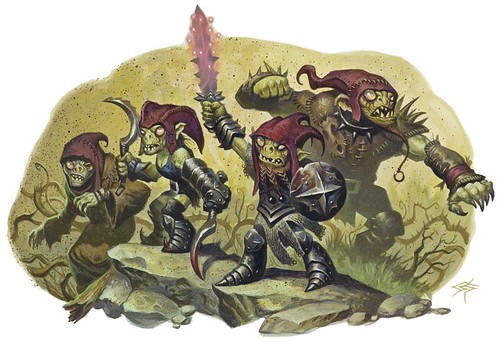 I think the spriggans from Monster Manual 2 were probably my inspiration for my character-- that & my infatuation with the "Balor of the Evil Eye" Fomorians in 4e (see also The Maker of Moons). He's Bogey Noodlewriggler (a shoot-off clan of the much more successful Lobescrubbers), a wizard with an eye fetish. He comes from a family of surgeon-mummifiers, goblins that live in catacombs offering their services as trepanators to the living, & as corpse preparers for the dying. We'll suck out your brains, is what I'm saying. We also cater mindflayer banquets. Anyhow, Bogey has an atrophied gimp eye & a big, cataracted ogling eye. He also has a joker-smile on one half of his mouth. & a pet gelatinous cube (well, I prefer to call it "Jelly Cube"). So yeah, there is a Gaimanesque "injury to eye" motif going on. So he's an Orb-style wizard, has the holy symbols for Vecna, the Great Mother, Ioun, Gruumsh. Eye guys!

Anyhow, in David's Orrery universe he mostly shouts about telescopes that kidnap angels & metal heads that they put on your neck...after cutting your head off. Which is convenient, since that seems to be what David's game is about. I can't actually talk to any of the NPCs, since I mostly avoid getting screwed? I mean-- there were angels who was marking dudes & cutting them up...then they could talk. Tonight an evil tentacle lobster climbed out of a little kid's face, & sucked up pieces of people's souls-- those guys who that happened to can talk to the NPCs. So far, I've managed to avoid those dire fates; luckily, all the NPCs seemed to be filled with nonsense. Nonsense! I've been appointed "guide" by the drow (who are typically full of themselves) which means that everybody follows me when I say to go to the tower, or to the place where the magic golem heads are. Fine! Today that meant we saw a town full of creepy twins. Whatever, twins! I don't care about you, I have a sack of puppies & kittens to snack on later. I will say this: the party hasn't truly been "evil" yet. I wonder if it will be. I mean-- okay, we've been evil, but everyone is so stupid & confusing that you can't blame us. Sure, we stole that woman's newborns. She was crazy though. Or I think she was, I stopped paying attention once I ate her afterbirth. I guess Bogey (not that any PCs besides me & Edbury's Salarius have exchanged names) is into big ideas, which he quickly grows bored of & leaves to the other players to clean up. I can live with that. Anyhow; at the end Maggie's character exploded & was Baphomet or something. Something crazy. It needs our help! I say we attack it. 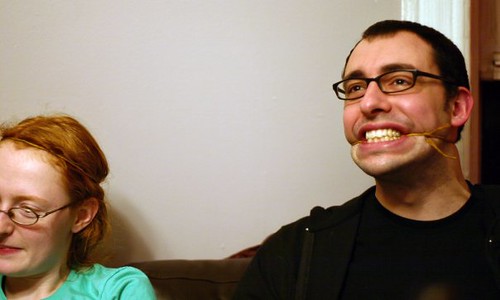 (Chewing through rope, photo by