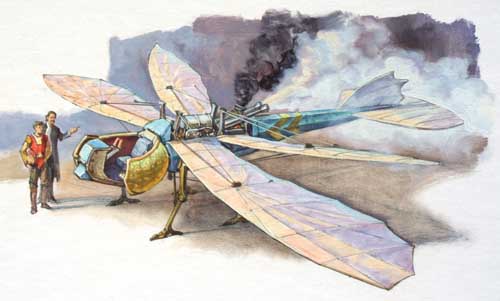 (The ornithopter of the Dragonfly theme, by James Gurney.)

I haven't run an Oubliette game in a long time: life troubles combined with NaNoWriMo & various scheduling difficulties, along with the holiday dogpile...it just toppled that tower of cards. Last night we picked up the hoary old tale & dusted it off! Things had been fuzzy, so rather than just jumping ahead entirely, I tried to do a "bookend" tale for the last session. It was only somewhat effective, & it ended up taking a little longer than I'd hoped. The players discovered they'd been locked in their rooms by the Generalissimo, & slated for execution...Balthazar stumbled naked into the room (I convinced

toughlad to take off his shirt!)...Hermóðr tried & failed to set an explosive boobytrap...& eventually the party found that rescuers had somehow (in a dream!) been alerted to come rescue them...in a dragonfly shaped flying machine! I'm glossing over some things here. Balthazar had last been heard to be lost in "The Black House," a fact which left the other players nonplussed; he came out worse for the wear. Lorelai's brother Legend was with them; he left. They spoke to the Karnaks. It all ate up more time then I'd thought...but then, that always happens.

Back in Malake, at the theme of the Dragonfly, they find that war has mostly petered out. The Shining Horde no longer camps en masse, but remains a threat. Meanwhile the city is booming, as the Dux & the Doge jostle for leadership, as the Aristos move in, as the goblins move up, as the Church carves out its Holy See. The players reconnect with each other: Heremod & Damocles try to convince Balthazar to eat & sleep (he's stopped doing either, you see). Lorelai reaches across time & space...& turns a lock of her hair blood red, the colour of her twin Kore's hair, which she cuts & gives to Balthazar. Damocles puts down the sword & takes to carving jade with sand, to make a sculpture-portrait-cameo for Lore. Mathio & Lupus are abashed to admit that Lore's former owner (from her slave days) Airvanthe is back in the city of Malake. Mathilde tries to seduce...well, everbody...to no end. The courtesans of Dragonfly surprise Lore with a forced spa treatment. Damocles practices techniques with his Drake Elite soldiers, trying to learn from them. Balthazar spaces out...a lot. 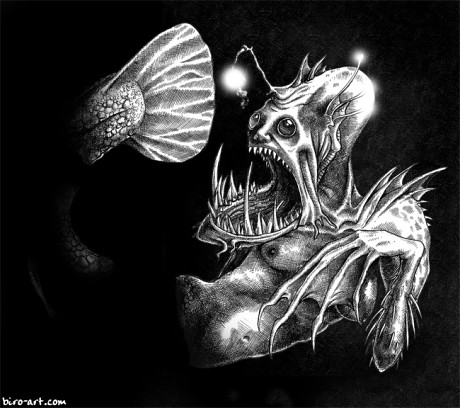 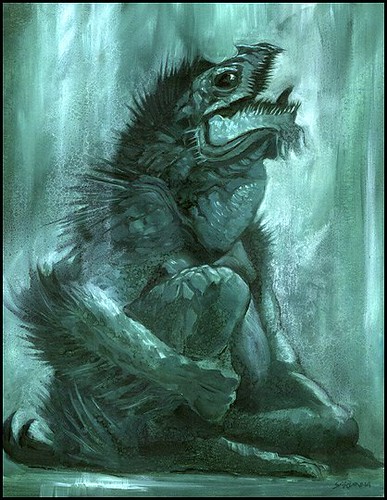 Eventually Lorelai decides it is time to get down to business, after a few weeks decompressing. She is fed up with the mysteries swirling around the Demi-lion theme. Did they start the war? What is this Fish God? How about the history of the theme? So the players swirl into action. Balthazar searches his dreams-- or those of the inside of his head. Bedwin Heremod searches his library, & discovers a chain of ownership including the Malleus Aristos. Damocles goes through the old heretical "unholy" books of the See & discovers a piece on The Drowned, & a picture, too. Lorelai hears rumors through the servants, & one of her courtesan anonymously drops off a painting in the same style is the merman in Baronessa Malleus's home, with cryptic text on the back. Clues like:

Canst thou draw out Drowned with an hook? or his tongue with a cord which thou lettest down? Canst thou put an hook into his nose? or bore his jaw through with a thorn?

He will make many supplications unto thee. He will speak soft words unto thee. He Will make a covenant with thee. He wilt take thou for a servant for ever. Wilt thou play with him as with a cat? or wilt thou bind thy maidens for him? Shall the companions make a banquet of him?

Who can open the doors of his face? his teeth are terrible round about. His scales are his pride, shut up together as with a close seal. His heart is as firm as a stone; yea, as hard as a piece of the nether millstone. When he raiseth up himself, the mighty are afraid: he has the breaking of their reason. The sword of him that layeth at him cannot hold: the spear, the dart, nor the habergeon. He esteemeth iron as straw, and brass as rotten wood.

His eyelids are like the gates of night, & he shirks from the lamp. We madeth the river to boil like a pot with ungents & poisones; the deep made like a pot of ointment. His joy was turned to sorrow; though all the unnumerable creepy & swimming beasts died thus, & many mouths went hungry. 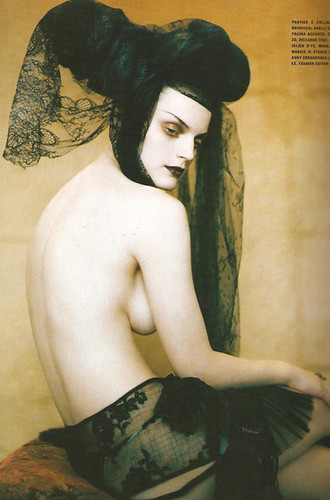 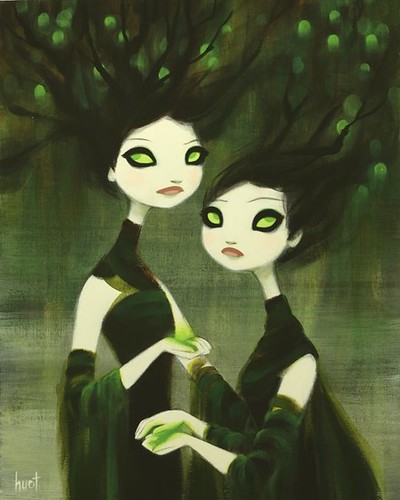 The session ends with Lorelai convincing the reclusive, apathetic, agoraphobic Baronessa Octavia Malleus to come visit her. She sends the Lalia twins ahead of her, but does in time come herself. She wears...very little clothing. The conversation with the twins is cute-- they finish each others sentences, & start them too. The Baronessa is...always exhausted, exhasperated. She spends more of her time flirting with Lorelai, but eventually the players start to draw information out of her-- or give her enough information for her to confirm her own suspicians. There are more than one "Fish God," perhaps one of which is an ancestor of Octavia's named Caius. There may be secret ways into Demi-lion. & there may be ways to reason with the "Fish Gods" but the price is control, is drinks of their addictive blood. Towards the end, Lorelai & Octavia are half joking that Octavia will have to take over Demi-lion, perhaps become the queen of these "Fisher Kings," & then she & Lorelai can barter...
Collapse