Robots Have No Tails by Henry Kuttner.

Your "liquor organ"
is an instrument, not a
gland, like what I want.

The premise lies thus: Galloway Gallegher is a drunk. & a genius. But only at the same time. Sober Gallegher is a perpetually harrassed trouble maker, but if you get the epic quantities of alcohol into him that he requiers to take the edge off, he will invent your socks off. Not in any reasonable fashion-- no, drunken Gallegher (eventually dubbed "Gallegher Plus") won't make any sort of assembly that makes sense to sober people. He'll weld shoehorns to wastebaskets, put in an order (on credit) for thousands of credits worth of bioplasm, toss in a handful of gadgets...& then sober up. Then poor hungover Gallegher has to figure out what he invented. Of course, this all comes in the middle of a tempest-- people trying to collect on his outstanding debts, shady lawyers (they don't call 'em shysters for nothing) trying to bully him for a court case, police claiming he's murdered someone, crooks wanting him to murder someone-- all kinds of worry. & in the middle of it, he's got the MacGuffin he invented last night. Which is the mystery-- why did he invent a see-through robot sidekick (Joe, or Narcissus) who only likes to stare at himself & proclaim his beauty? Why did he invent it to solve an attempt to break a television network monopoly? Gallegher tries to trace his drunken footsteps & inebriated thought process, to fun effect. Joe, Grandpa, & the occasional space invader bunny ("the world is ours!") keep him company along the way. These are short stories, but they sure are a fun couple of pulps. 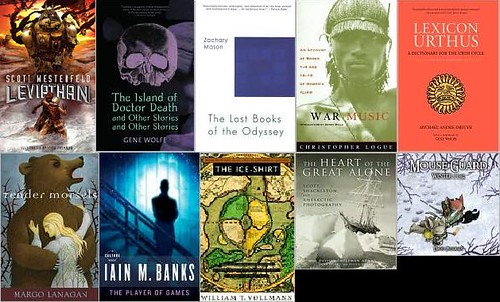 Last year's picks I cheated on, going for twelve instead of ten. I decided to buckle down this year; really grit my teeth & scrape it down to the top ten. That leaves me with a pretty hefty list of Also Rans, so I decided to make a second draft of top ten Honorable Mentions. Which means the only official Honorable Mentions this year are Watchtower Gothic by Mordicai & Windheart by Kingtycoon. Also worth noting that these are chosen from the books I read in 2009, not necessarily books that came out in 2009. & that I'm at 112 books read this year, & I'll certainly knock back a few more before we're through. Some of my picks are representative of entire series, in which case I selected what I thought the best of the lot was. Without further ado, here are the top ten, then, in no particular order:

Leviathan by Scott Westerfeld.
The Island of Doctor Death & Other Stories & Other Stories by Gene Wolfe.
The Lost Books of the Odyssey by Zachary Mason.
War Music by Christopher Logue.
Lexicon Urthus by Michael Andre-Driussi.
Tender Morsels by Margo Lanagan.
The Player of Games by Iain M. Banks.
The Ice-Shirt by William T. Vollmann.
The Heart of the Great Alone by David Hempleman-Adams, Sophie Gordon & Emma Stuart.
Mouse Guard by David Petersen. 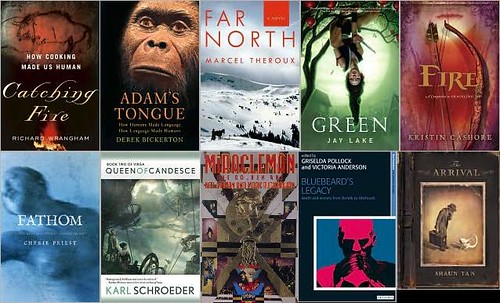 & here are the next ten, the Runner Ups (Runners Up?), again in no particular order: