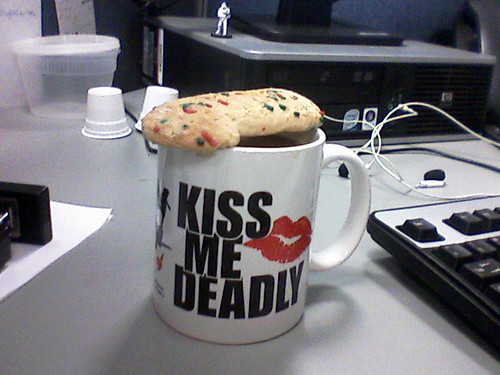 Nothing useful to say for myself! I've been fairly useful at work today; gotten rid of one snowballing project, but plenty more in the pipe. Ugh! Yesterday I went to lunch with Marie at Tabla-- or well, Bread Bar. She offered to pay, which left me in a pickle! Since she was paying I didn't want to order anything expensive, plus she's a tiny little bird who only eats grains of pollen & rainbows. & she was sick, so also sharing wasn't really an option! So I was a demure little duckling. We had some of the rosemary naan, which was darn good. She had some pumpkin soup, & the brussels sprouts, & I had some spinach. It was awfully tasty, I have to say. It was nice-- I want to hang out with Marie for more than an hour though, one of these days. Then came home; helped Jenny make some of the ragout we like. I think my body doesn't react well to navy beans? I get a bubble. That is what I think the culprit is; canned navy beans. Then we rolled around on the bed for about an hour having a tickle fight. That isn't a euphemism for sex; we were having a good ole fashions tickle fight. There wasn't any television to watch, really; I watched the Mythbusters where they fool around with antacids & gokarts, but that was it. I am excited about playing Dungeons & Dragons on Saturn's day with the Bayridge crew; they are all madcap monster mash grab bag, so I wanted to play a monster race to fit in: I decided on a goblin "wizzer," since they need a controller. He also led me to think of what I want my tiefling warlock's new Patron to be. Excerpted:

He is the Maker of Moons. An ancient Formorian-- or at least, as much like one as a Titan is to a Giant, or perhaps even a Primordial to either-- the Maker of Moons dwells on the silver orb in the Feywild. He appears as an old, disfigured behemoth figure, one eye bulging cataract pale. huge, pendulous, wicked in his skull, the other a flicker of colours, now snake scaled green in the light, now peacock purple & blue. On his back he carries an enormous white sea shell. His hands are burned-- it is said that the Maker of Moons once sought the throne of the Sun that Pelor now sits upon, but he was afraid to catch fire, & retreated to the moon he created. From his White Throne, he looks down upon the Prime, Fey, & Shadow planes, seeing all that transpires on one half of the worlds at any moment. From his Black Throne he looks out to the Dark, to the Far Realms, & the malice of the Stars. The waxing & waning of the moon is given to the various gods & goddesses of the moons-- as it their effect on the tides & such paltry matters: those are the affairs gods care for. The Maker of Moons cares for his whims, his caprices, the Unseelie way. He is cruel, but wise. He is cunning, but can be fooled. Is he evil? No. Nor is he chaotic-- again, such matters are the concerns of gods, & mortals. He is Himself.
Collapse