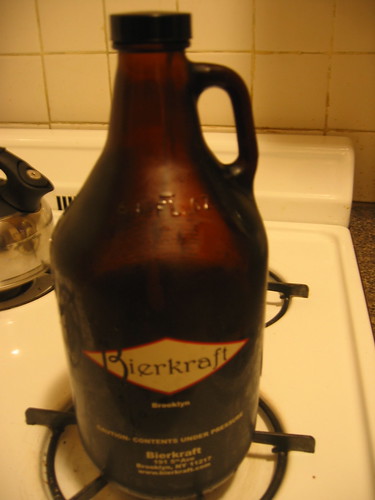 The weekend of fancy beer! Yikes, though, yesterday was a chore! Breakfast was skipped, & jumped right to lunch--

toughlad came to the grocery store with me, & didn't know it was there. Yep! That is the better one, in fact. There was some turkey & brie sandwiches, then everyone scurried! Well, besides me & Jenny. She was a gumpelstiltskin. She was all fussy, all day. She knew it, she wasn't being mean, but darn if she wasn't unhappy! Eventually I snuck to the gym-- a longish workout, but only because I loaded up on the cardiovascular. Then home to fussier Jenny! We watched some television, but we weren't getting anywhere-- but then I came up with a winning plan! Jenny had canceled her plans, on account of her foul mood, so she & I walked (in the rain!) to Bierkraft. We got a growler full of the Einbeck Winter Bock, & a bottle of Lagunitas Maximus, & a roast beef sandwich. I haven't been there since they put the tables in, believe it or not. Also; I now think I might want to figure out if I care about cask beers? Maybe I should learn if I do or not. From there, home-- then Xmas! Jenny strung up lights everywhere, & we watched the holiday 30 Rock, & the holiday Modern Family, which was actually funny. Then Elf was coming on! That movie is so great. I had to endure half an episode of Jersey Shore to get there, though-- which is exactly the show you think it is. Yep, no need to watch it. Finally Elf came on; we finished the growler & then paused it in the middle, & went to bed. Jenny in a much better mood. Very successful. From Bierkraft onward, it was a really nice night. What can I say? I'm easy. Lunch with Marie today.
Collapse