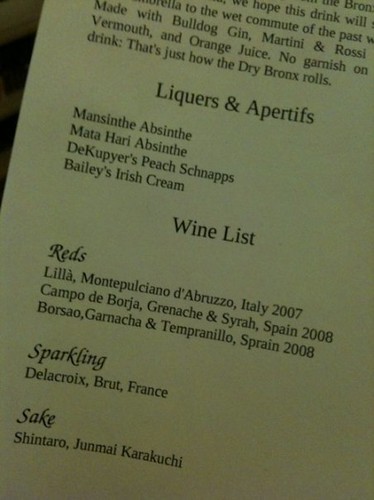 I have been both lazy & busy this weekend! Lazy because, when left to my own devices, I haven't gone to the gym. Not even a little! I played some video games, but that is...about it. Oh, I did wrap some X-mas presents & put out the fiberoptic tree. Busy because I've had a social life, which is the darnedest thing! Freyja's day was Tracey's birthday--well, part of it. She staggered it to Saturn's day (twice!) & Sun's day, too, but Freyja's day was the one I actually showed up for. It was a blast? I had a great time. The absinthe & martinis may have contributed to that? But it was a good crowd. For a while book people sort of took over the conversation-- bookstores & publishers all! It was a fun time. Sam set himself up as bartender & was awesome, really awesome at it. I call the event a spectacular success-- then of course Saturn's day morning I was paying for it. I burned the barn down!

Then last night Jenny came home (finally! I was missing her all day) & decided we should have a date night at Beer Table. Beer Table is a little nook of craft beers; but unlike a lot of places you might go for arty beers, the aren't the "here are the kegs we have on tap!" variety. Though they do have three taps open, they also have a menu of select bottles, which is where the fun lies. First, be braced to look at the prices, & make sure you are comparing the prices to the bottles. This is a lot like buying wine, actually, but you know, beer. That said, I think buying beer is easier than buying wine. Anyhow, don't be intimidated; the staff is okay, don't make you feel like a dolt, & the menu is great. I really like the menu-- all descriptive words, done really evocatively. I got the Harvey's A. le coq 2003, aka the Imperial Russian Stout, which is apparently the beer Catherine the Great liked. It was the darkest one on the menu, & the words describing it were bizarre: "cigar smoke" & "balsamic" are the ones I remember. It was pretty great, but I don't know if I could drink two! It wasn't fizzy, & smelled almost like port it was so thick. Also: I like hops, & Jenny doesn't. We split a plate of sausages & a bowl of olives, then we went down to Commonwealth & I had another Captain Lawrence Liquid Gold, which is super hoppy & I really really recommend. Then we came home & I made Jenny read Mouse Guard & she didn't care about it?! Blasphemy, horror. Then we watched Men of a Certain Age, which had some funny bits but is maybe too dark, too given to the characters being failures, for me to like.

Hark! Hear the Mouse-wise.
We are among you! We will
prevail! If able.

toughlad has been pushing this. I've seen it at Compleat Strategist, & sort of knew it existed & was big on Google Wave, but hadn't looked to hard at it. Well, now I have, & I like what I see, but there are pluses & minuses. First-- I think James nailed it as to why Mouse Guard is so effective. Once you buy into the core premise-- anthropomorphic mice-- the rest of the set-up has no additional burden on you to suspend your disbelief. Say for instance: "a chimera has moved into the forest near your town; you must dispatch it, brave sir Knight." In Mouse Guard that becomes "a snapping turtle has moved into the pond near your burrow; you must dispatch it, Guardmouse!" Just the whole range of nature becomes some sincere menace. Oh & I really like that weasels are the "dark reflection" of the mice, rather than rats.

As for the system itself, well. The best thing about it are the traits. You take a trait-- "Clever." Whenever you can use it positively, go right ahead! "Oh, well maybe I can figure out this weasel puzzle door, I'm Clever!" Ah, but in the vein of some of White Wolf's products, you are also rewarded when you use that trait against yourself. "Ah, I know I shouldn't mess with the Matriarch's cryptogram, but I'm Clever, & I want to see what it says!" That nets you in-game rewards; I'm sweet on that mechanic. In general the system is elegant & character generation is easy...but rather narrow. You can make a guardmouse-- anything else, not so much. Conflict resolution has a sort of rock, paper, scissors mechanic on top of the dice rolling, which I'm not too hot for: seems needlessly complex? & there is a lot of back & forth between Narrator & Player control of the story-- which I am interested in-- but I worry that the level of abstraction could take away from the little moments? Some of my favorite memories of gaming are the little vignettes, the little scenes that sort of spiral out of control into their own side-quest. I worry that too easy resolution might make that less likely. I'm not saying it will, but it is a concern I had. I do really like that resolution is not absolute-- so you might "win" a fight, but that doesn't necessarily mean your enemy is dead. & you might have to "compromise." So maybe you win but maybe the bad guy burns down your home. Or kills your pet cricket. Interesting quirks.

I really like Samus Aran; she's my homegirl. This game was fun; like many, when I first tried it out (as one of those consoles built into video game stores) I was a little thrown by the fact that it was a first person shooter, but it didn't really bother me. This game is fun! But also very frustrating. There are some fun maps-- but you have to trek all the way across the maps over & over again...it gets to be a bit of a chore. I have a few other minor complaints-- the palate swap of the thermal & x-ray visors was...well they both basically work the same? Frustrating-- the functionality was just identical? I only finished with 70%; I would have liked maybe a power up that helped locate missing items, like a map upload? Something like that. Still, I'm just complaining. I had fun. Some of the bosses are too hard to kill when drunk, something to keep in mind. Woo hoo!
Collapse