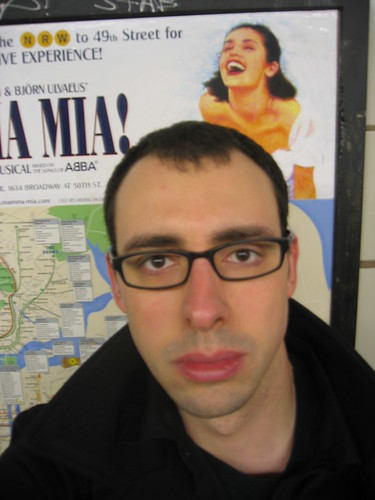 I shouldn't really be updating here, I should be working on my NaNoWriMo novel, Watchtower Gothique. I'm at 6668 words, but I didn't write at all last night, since decided to maek grilled cheese, eat it with the leftover squash soup, go to the gym, & hang out with Jenny. Then today I haven't written at all, either-- I was too busy voting! I was going to take a picture of the knobs inside of the voter booth, but then suddenly-- I wasn't listed in my district! Probably because the DMV changed my address to "7th ave" arbitrarily. I had to fill out an affidavit vote, which is much less exciting. Still, my duty to the republic is discharged. Here is how I voted: Bloomberg for mayor on the Independent/Jobs & Education line. Maura Deluca for public advocate on the Socialist Worker line. John Liu for city comptroller on the Working Families line. Reginald Boddie for judge of the civil court on the Democratic line. Marty Markowitz for borough president on the Working Families line. David Pechefsky for City Council on the Green line. I voted yes on both ballot proposals.

This weekend past was a pretty big blowout. Argh, I really shouldn't talk about it, I should be writing on my stupid novel! I will though, I need to get this down for posterity, or whatever. Friday during the day I helped Nick & Rachel move. Nick was one of the soldiers who showed up to boogie down when I moved, so I was obligated, but I would've done it anyhow! For a while it was just the three of us, & Nick & I dominated the task of bringing stuff from the upside-world of his carriage house apartment down the spiral stairs. Don't worry, the stairs fold up! Then Rachel's parents showed up, & then Leslie & Matt. THEN! We drank some beer & ate some pizza. Nick & Rachel's apartment has a killed view, but even more envy making is the washer/drier. Boy wouldn't that be nice! Then I went home & Jenny was sad. But I left her anyhow!

I was trying to make my way to Kat's for her Halloween bash. It was...a disaster. I had the stuff for some kind of costume-- or as my joke was, "I'm not wearing a costume." You know, black cape! Weird Halloween gloves! Lightsaber! Just another day of Darth Malleus. I even brought the tube that screws into the lightsaber to make it have a neat glow-beam part. You know what I mean. Anyhow-- the F train was diverted to West 4th, which is fine-- Kat is only a few blocks from there. I was going to walk from 2nd ave, but no sweat. "Oh," I then realized. "That will take me near the parade. Well, I will just remember to switch sides underground & none will be the wiser." Ah, if only it were that easy. The cops had blocked the whole thing off! You couldn't switch sides. I don't cotton to complaining about the cops like they are evil, unless they are being such, but this was poorly planned. If your trains are being diverted from their regular station, & the solution is to take an opposite-bound train to reach the by-passed stations, you have to let that happen. & the cops also decided to not allow anyone exiting the trains to use the turnstyles-- everyone was funneled into the emergency exit, which meant it took me about thirty minutes to get out of the station, with the insane crush of people. Then outside, it was raining, & the waves of parade goers were acting particularly like a crowd of morons. So I wandered around, holding my bookbag so it didn't get soaked, getting jostled, unable to cross the street to go to Kat's because of the parade. Ended up lost in the West Village, which is redundant-- I could just say "in the West Village" & you could assume I was lost. Eventually I escaped. I seriously Mister Miracled out of it. Then finally, only an hour & a half later, I was able to walk five blocks to Kat's.

Nick's poem sums up Kat's party better than I ever could. I brought a bottle of the Brooklyn Special 2, & it took me a little of that & about an hour to stop griping about my train ride. I am a baby about things sometimes, & I was being a baby then! Still, eventually I settled in. The joint was banging, & the shindig escalated all evening. Kat's has a concrete "backyard", & adjoins the courtyard out front, & there is an alleyway in between-- & of course three rooms in her apartment. Well, all of them were pretty well filled. I spent most of the evening in the hallway/alley, with the occasional trip to hang out in Kat's room. My partners in crime were mostly Toy, Jocelyn, & Nick; honorable mention to Nicole & Matt S., though. I like when people know they can flirt with me, because I'm just a huge flirt, not like, trying to pick them up. Eventually Matt & Katie showed up, but by that point, I was getting ready to leave. Well, forty-five minutes later, at least. Probably the highlight of the evening was tracking the couples hooking up. There was some earnest making out & finger banging going down! Good for them. Then when I got home (midnightish?) Jenny was still up; we hung out for like, two more hours just the two of us. It was awesome.

This is a collection of stories, ruminations on nerdery, in particular, on High School geekdom. Contributed to by a whole host of the "cool kids" of YA literature-- & to sit at the popular table in YA fandom you kind of have to be a big nerd. The first story, by Holly Black & Cecil Castellucci, is a romance between a con-going pair of cosplayers-- a Jedi & a Klingon. Mostly when the 501st show up as the undisputed authority, that part is the best. They also wrote the interstitial comics, with illustration by the always awesome Bryan Lee O'Malley & Hope Larson. That story, & the comics, are very strong. A lot of the other stories are fine, or cute-- or in the case of Kelly Link's "Secret Identity", really weird. The only one I didn't like I pretty viscerally disliked-- Barry Lyga's "The Truth About Dino Girl." The culmination of that story? Has the protagonist, a paleontologically inclined girl with a crush on the baseball jock with the lame tattoo of a flaming baseball, bumping into the aforementioned guy's girlfriend, & spilling her borderline stalker doodles of said aweful ink all over. The girlfriend says predictable things-- "he's my boyfriend, you are a weirdo who is stalking him, leave him along" & then doesn't tell everyone in the school. She tells the boyfriend with the terrible tat, but leaves it at that. So our "protagonist"? Her "revenge" is to sneak into the girl's locker room, take pictures of the girlfriend while she's showering, & post them all over with a note saying "I R A SLUTZ" & posting the girls home phone. Okay, newsflash Barry Lyga. Your protagonist is the bully. Your protagonist is the villain in the other stories. On a lighter note, probably the sweetest story is "The Stars at the Finish Line," by Wendy Mass.

None of these were my geek childhood, though.

When I read Rapunzel's Revenge, I wasn't prepared to be wowed, & thus was bowled over. This time, I knew what I was getting into, but I can happily say it lived up to expectations. Where ...Revenge is a Weird West tale, this goes east, goes urban & becomes a good old fashioned Grimm Bros. Heist story. Jack takes front seat, which is fine-- he's not as great as Rapunzel, but she doesn't get sidelined, so that is fine. There is a pixie sidekick, which you know I'm into. A giant crimelord with a floating penthouse A steampunk gadgeteer. Giant ants! Cultural diversity-- seriously, the witchdoctor or kachina fellow, or whatever that guy was, what?! Where did that guy come from. Great. The madcap & frantic pace of the book really works; I was compelled to blitz through it. Jabberwocks & Bandersnatches, too, in the bargain. Gender positive, respectful of race, rollicking fun-- why isn't everyone writing books like this? The advance reading copy I read was black & white, & I can't wait to get a look at the finished colour art, because Nathan Hale's art participates in the Jeff Smith school of cartooning with a heavy dose of details & expression in the colour. I had no idea this was coming out but I'm pretty excited about it.
Collapse