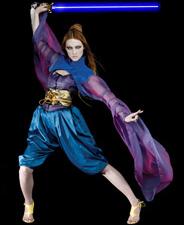 Last night's TV night was pretty fun! First off, the night before Jenny & I had some ridiculous pillow talk (does it count as pillow talk if it is before bed & not after sex?) & I remembered the anecdotes to relate to

elladorian! Like: I had started musing about how difficult it would be to make shoes that would let you walk on water, & Jenny was helping, trying to make them snowshoe like. Then she finally said, "then you the army could wear them, to invade other countries!" & I was like, no, baby, infantry with water walking shoes is not a dramatic measure; aircraft carriers & submarines are still better. To which she replied, "I wish I could fly, then I'd invade enemy countries & they'd be afraid & I'd be like fuck you, suckers!" or something. It was pretty magical. Good for you, memory, for dredging it up! Jenny was a little bit exhausted, prior to David & Maggie's arrival, & was contriving plans of escaping to bed-- I went to get us a sandwich to split, ran into Victoria who I keep meaning to hang out with. Her post-personality-make-over self is pretty funny to me. I went back & we dug in & luckily by the time David & Maggie did arrive (earlier than expected!) she was feeling better. No

We started out with How I Met Your Mother, which did a road trip homage that made me nostalgic for

symon & my epic roadtrips between Gotham & the Wastelands every couple of weeks. & made me think about Sobe's Lizard Blizzard, which we were inexplicably obsessed with. The b-plot was a riff on Canada; I kept wondering if it would make a detour towards a couple of Healthcare jabs, but only a little, only tentatively & non-partisanly. Still, a chuckle factory of laughs. Then on to America's Next Top Model! Last week there was a DVR snafu, so the episode didn't record, meaning this week we had two to dig into. I have to say, this season the judges have been much better at eliminating people who deserved to go. I don't think I've disagreed with any of the picks for final two. Seeing big mouth Kara go was very cathartic. Seriously, she strikes me as the girl from a small high school that gets arbitrarily decided on as "pretty" & then post-high school everyone realizes she isn't attractive at all, & that the gawky nerd girls like Nichole are the ones who are actually beautiful. Nichole! & Laura! In full effect. The go-sees were...what you'd expect. A team is late because they don't realize that 5 minutes is not long enough to get across town. Duh. Photo shoot with martial arts weapons & me saying "I hope they get to pick!" & they do! The follow up episode was a little bit less interesting-- it was the "talkie," where they have to interview & record commercials. Which is usually a bit of a disaster, of course. Nichole, surprisingly, wasn't a giant clusterbomb of failure, just weird. Laura came on with the sob story-- dyslexia! Okay, fine. Most excitingly, the comedian Ant actually said true things to them, when he said that being a reality tv star can pan out if you are a "double threat"-- aka able to talk & make people like Ellen Degeneres like you. Which is true enough. When they sent Rae home I was a little bummed, since I liked her, but she hasn't been doing sterling. I still think she's got way more pop than Brittany or Erin, but her elimination wasn't like, a crime. Usually ANTM only betrays you really badly in choosing the cycle winner.

I just had to deal with a book cover, whose author bio says she splits her time between "Connecticut & New Hampshire." Isn't that like me saying I split my time between Brooklyn & Manhattan?
Collapse