The Knife of Never Letting Go by Patrick Ness.

Abandon all hope
ye who enter here. By here,
I mean Prentisstown.

skycornerless lent this to me, & I ended up unimpressed. I'll be brief with my blurb of it, thus. The premise is thus: dystopian farming community on another planet, medium Christian overtones. All men! All telepaths! Claimed to be part of a biological attack launched by the original humanoid inhabitants of the planet, the Noise killed all the women & made all the men constantly spewing their thoughts all over. Which is the "hook" for the book; boy's dog can talk to him! Boy is inundated by the stray notions of fellows. Boy sends his every niggling though as a broadcast! The other pithy bit of the book is the spelling-- "desperayshun" for "desperation" & lots of ain'ts & what have you-- & lots of scribbly font for the Noise. The real issue I have with the book isn't either of those things, though.

First, is the relentlessly bleak tone. I'm so over the idea that constant misery makes something deep. Oh man bad things happen to everybody, all the time! Yawn. The second is related: lots of cheap tricks, narrativly. Just when you thought X...Y! Oh..okay? Then, for no reason, Z jumps out of the bushes! Third problem hooks into both of those, too: I hate stupid protagonists. I will admit a weakness for competance porn, but I really don't like characters who are willfully ignorant. "Oh, you mean this big book of plot exposition? No, I'll just carry it around in my backpack without ever reading it. No, it is probably best if I don't look in the big book of plot exposition till the end." Note: there is an actual book, this is not a metaphor. Along with plenty of "He shows me something in his Noise, but I don't want to narrate about it here in the story. I'll wait till the end of the book." Oh & of course related to all three of these things is the fact that everything the protagonist believes is a lie, so of course there are still women alive, still aliens alive, &c. Which brings me to one of the just boring, problematic things in the book. The men, they shoot their Noise everywhere, while women, they just don't have any. They are silent! Okay, it turned out not to be as much of a disaster as I thought that would be (Creative Light! Consuming Void!) but still, it got under my skin. & again, is easy, cheap. Oh boy, gender dichotomy! Really though, the thing that most bugs me: this is a series? What. Why. The same scene is repeated again & again in this book-- the evil preacher attacks the boy, the boy doesn't kill him, the boy escapes. That happens...three? Four times? Can we maybe condense that? No, because then we wouldn't get the bleak, cheap, implausible, predictable twist at the end, would we. Really, if whatever is in the latter books was gleaned, put into here, I might be more forgiving. 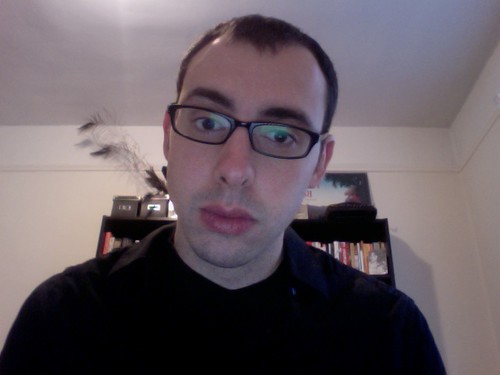 Things used to get bad. I mean, they used to get Drama Bad, plenty, but they've been straight up Dark Times, too. Heck, there was that time I had to get reconstructive surgery for my face, that was a bummer, right? Well, October has been making a case! This hasn't been my team's month. Besides some Legitimate Bad Stuff, there has just been a mess of slings & arrows & other outrageous fortunes through at us this month. Moving in to the bigger apartment has been a bit of an albatross too; we would have been as poor as we were five years ago, which was the plan & would have been fine, but all the mud & blood of October has made the cut deeper. We've got some funny plans in the works to fix that up; we'll see how things go with that. I might have some real sitcom news soon. Still, I'm pleased to see that Troubles aren't causing a wedge with me & the wife. We've got a pair bond, you best reckon. Oh & the dog of her childhood died today. So thanks October. Thanks, I get the message. We're all horse heads in the sheets. I get it. Bring your best soldiers to the fight, though. There is no man or machine. Who can stop me.

I am coy with my explanations since a lot of the onus is on my wife's shoulders, or shared between us, so the veil of privacy isn't entirely mine to life. Still, it makes me think. Remember that time in college when I took a philosophy course called "Love & Friendship" just so that I could fail it & then laugh at failing love & friendship? Oh those self destructive twenties! The roaring twenties, full of all the bootleg liquor you could hold, also Chicago typewriters & drive-bys. There was a gentleman, Robert Nozick, who contended that his definition for love was that, compared to friendship, when someone you loved had their fortunes rise, rather than feeling glad for them, your fortunes rose too. & correspondingly when someone you loved had bad things happen, rather than sympathy for them, it was like the bad things happened to you. Well, at the time I wrote a paper using his schema to say that hate was obviously superior to love, for if you hated someone & their fortunes fell, then yours would rise, & in a universe with entropy, bad things were easier & more reliable then good things. I turned that in & stopped going to that class, stat. Still, it seems true. Hard knocks for Jenny translate to a hard knock for me. Good thing I make Angaband look like a playground, I'm so iron fortress.

Oh & I invented the #balrog hashtag at twitter, where I just right POV entries from the Balrog of Moria's perspective. You know, I was always charmed by the name that Iron Crown Enterprises gave the Durin's Bane in their Middle-Earth Role-Playing supplement-- Ghâsh. Fire! What the orcs chant when he comes up from the deep places of the world, where he has been gnawing at the roots of the mountain. A nice strong orcish word. Oh Moria; you are the place I think of, sometimes.
Collapse